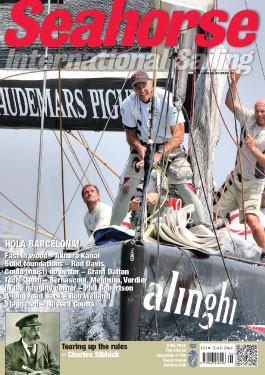 Thing of beauty
Not only a very beautiful piece of fast craftsmanship, but maybe also a glimmer of hope for home builders. AKIHIRO KANAI, ACT

Happy Sad
While everyone else was making a lot of noise Barcelona was quietly getting on with the job. CARLOS PICH, IVOR WILKINS, GRANT DALTON

The finish of champions

We got the invite!

Update
Getting stung in St Barts, but entertained in San Francisco, we’re all off to Barcelona, but while the AC75s get faster they don’t get cheaper, VASCO DA GAMA he was not, winners and grinners at the end of SailGP but one man is hogging the top step. JACK GRIFFIN, TOM SLINGSBY, TERRY HUTCHINSON, ADRIAN MORGAN, JIMMY SPITHILL, RUSSELL COUTTS, ROB KOTHE

World News
This Rhum’s a monster, ‘maxi spat’ in the Ultimes, PHIL ROBERTSON… gun for hire, TRIPON’s woes, BLUE ROBINSON finds something new to be intimidated by. Plus more baby-steps for the US in the quest to get back into Olympic contention. IVOR WILKINS, DOBBS DAVIS, PATRICE CARPENTIER, FRANÇOIS GABART

Rod Davis – Crank it back
For someone as successfully immersed for so long in the highest echelons of sailing, this Olympic gold medallist still has his feet planted firmly on the ground