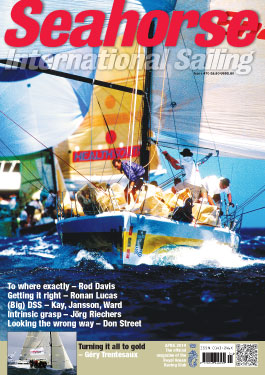 Coming of age
Oak trees and acorns indeed but the small handful of finishers in the 2018 Golden Globe Race should be seen against the early entries that are already in for the next race in 2022. ROB KOTHE talks to the race’s creator DON MCINTYRE

Vision
When Baltic Yachts and the Farr office agreed to throw their weight behind the biggest DSS project yet they did not hold back. The result is certainly going to be watched unusually closely. GORDON KAY, SOREN JANSSON, SIMON EVEREST, KEN READ, BAS PEUTE, BILL FAUDE, JAMES WILKINSON, BRITT WARD and DOMINIQUE PEDRON

A winner
No other way to talk about the most successful IRC skipper anywhere, GERY TRENTESAUX shares ‘a few’ of his secrets with his sometime crew and sometime rival FRED AUGENDRE

Too easy
People often talk about the Stephens/Burgess designed Ranger as the ‘Super J’ with a hull shape that no one could compete with. DON STREET argues that is really just a small part of the story

All going to plan

Update
That spirit of friendly competition, why looking backwards is rarely a good look (especially if you’re over 84kg), first (Figaro) impressions and a racing success that stands out above most others. JACK GRIFFIN,WILL HARRIS, TERRY HUTCHINSON and MIKE WOODHEAD

Rod Davis – Where exactly?
Before taking sailing ‘forwards’ we first need to work out which way forwards actually is…