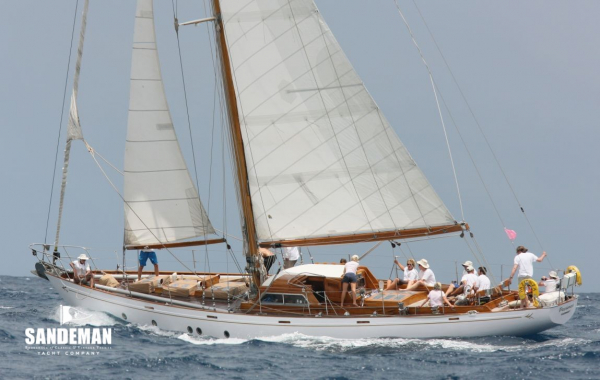 It is known that PAZIENZA raced regularly in the Mediterranean in the late 1950s, winning the Giraglia in 1959 with Andrea Giuseppe "Beppe” Croce at the helm. In 1960 she was used as an official yacht to transport important personalities during the Rome Olympics including; it is rumoured the future President Kennedy and his wife Jackie.

Laurent Giles seemed to achieve a seamless transition between traditional and modern styling - it is not surprising that PAZIENZA with her handsome sheer and understated English good looks was down to the last two nominees for the most beautiful boat in France in 2010.

In his design philosophy, Giles considered that a yacht should have ‘the utmost docility and sureness of manoeuvring at sea, in good or bad weather.’ Thus his boats were designed to maintain a steady course with minimal action by the helmsman, yet to respond instantly to the helm if the need arose. He identified PAZIENZA as a ‘good example of a comfortable shorthanded cruising boat with a first class performance under power yet able to take part successfully in ocean races. Yachting World in 1957 described her as ‘a large cutter into which a great deal of thought has been given to comfort and convenience.’

The current owner and family have successfully cruised and raced in Europe and the Caribbean and PAZIENZA is just one of those boats that once seen – she will always stay with you!