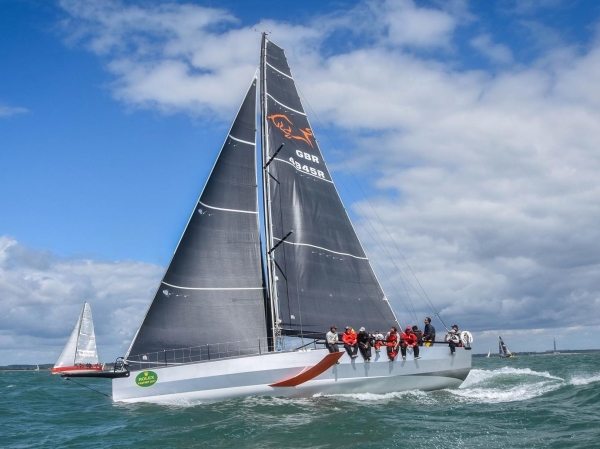 Designed by DSS-creator Hugh Welbourn, the Infiniti 46 is an uncompromised carbon fibre racing yacht principally for coastal and offshore events.Maverick is fitted with a canting keel and single dagger board option, to complement its lateral DSS foils.What are DSS foils?DSS foils have been part of ground breaking yachts for the past ten years, including European Yacht of the Year 2016’s Quant 23; the Baltic 142 which won the Boat International award for naval architecture in 2020; Wild Oats XI for two of her Sydney to Hobart victories; the Infiniti 46 “Maverick” recognised as the fastest offshore monohull of its size in the world.DSS uses a retractable foil that deploys to leeward to complement the keel of the yacht. Like all appendages DSS produces drag, but it also creates lift, and the lift is the square of the speed. The lift created by the foil reduces the drag of the yacht through the water, increasing speed.The DSS foil creates Righting Moment (power/stability) in the same way more crew sitting on the side of the yacht does or canting the keel or adding water ballast. This can be thought of as power.The combination of increased power, reduced drag and significantly less heeling (as much as 30%) and pitching (as much as 42% less) produces a fast, easy to sail yacht with more comfort.Launch Year 2016Beam 3.90 mDraft 3.01 mDisplacement 5600 kgDeck material Carbon foam sandwich and compositeKeel/ballast Milled steel fin and components all by CariboniDesigner Hugh WelbournBuilder Infiniti Yachts