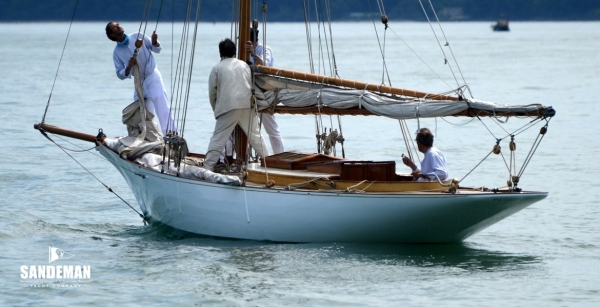 PEGGY BAWN is a rare thing indeed. The number of surviving vessels from pioneering Clydeside yacht designer George Lennox Watson’s lifetime (1851-1904) can be counted on a careless carpenter’s fingers.

Long gone are his huge America’s Cup challengers and “Big Class” racing yachts, and only two of the fleet of palatial steam yachts – the superyachts of their day – from his Glasgow drawing boards are known to survive, in fabulous condition although barely recognisable from their original appearance.
It is left to PEGGY BAWN to carry the flame for Watson’s groundbreaking mid-1890s work in setting the standard for moderation in sailing yacht design, work that has never been challenged – only endorsed by those who followed his lead through the 20th century, especially Olin J. Stephens, who was a self-confessed Watson fan.

PEGGY BAWN’s gilded “fiddle” bow was anachronistic even at her launching in 1894, partly a past fad, partly practical, undoubtedly beautiful – an interim stage in the development of extending immersed waterlines for faster sailing when heeled with a more buoyant hull – but it conceals the fact that when her award-winning restoration team began assessing what they’d found in a County Waterford hay barn in 2003, they quickly realised that the “numbers” – yacht designer speak for the various ratios that define a hull – were simply a scaled-down version of those for Watson’s famous royal racing cutter Britannia of 1893.

Her name gave rise to the so called “Britannia Ideal”, as she was and is considered the epitome of sea kindliness. PEGGY BAWN's present owner can vouch for that from fourteen seasons of racing and cruising aboard her in northern and Mediterranean Europe, and east coast USA.

PEGGY BAWN is quite simply the best behaved yacht any of them had had the pleasure to sail. And her rebuild and restoration set new standards for documentation and authenticity. She's special.