All the performance none of the guilt 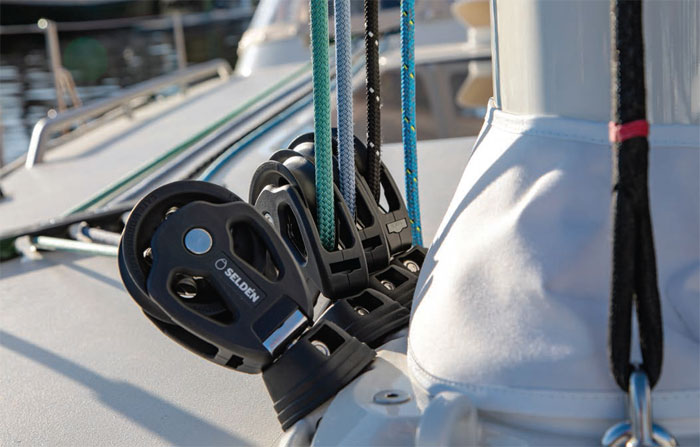 Marlow’s Blue Ocean ropes are identical to their conventional lines, but with just a tiny fraction of the usual carbon footprint

Many of the eco options available to sailors come with compromises attached. Electric motors need heavy batteries and have limited range, whilst bio-composites cannot match the performance of carbon fibre for most applications. Marlow Ropes’ Blue Ocean range delivers sustainability with zero compromise, protecting our environment whilst delivering identical performance to conventional products. There really is no excuse not to use them!

Sustainability at Marlow Ropes is not a tick-box PR exercise, it has been embraced across the company. Sugar cane-based recyclable bio-plastic is used for all plastic packaging. All cardboard and paper used is FSC certified and mostly recyclable at point of destination. Supply chains have been redesigned to avoid air freight where possible. Perhaps more important than any of that, Marlow invested early in the development of sustainable rope-making materials.

Mooring lines were their first sustainable product. Blue Ocean Dockline was launched in 2018 with both core and cover 100 per cent made from recycled bottles (rPET).

Next up was the introduction of Bio-Dyneema, introduced as standard across the Marlow Ropes leisure marine range of Dyneema products in 2020. Bio-Dyneema is produced using bio-based feedstock, which is waste from the pulp and timber industries. It has a carbon footprint around 60 per cent lower than conventional Dyneema and 90 per cent lower than other ropes made from HMPE. Bio-Dyneema has identical properties to conventional Dyneema and is available in Marlow’s SK78, SK99 and DM20 product lines. Bio-Dyneema is used throughout the current SailGP fleet and also aboard a host of other grand prix race yachts.

Main picture: Marlow’s sustainable Blue Ocean ropes now include Bio- Dyneema lines for applications ranging from sheets and halyards to steering cables.
Below: the construction is exactly the same and the materials are chemically identical. All that’s changed is the carbon footprint, which has reduced by 60 per cent 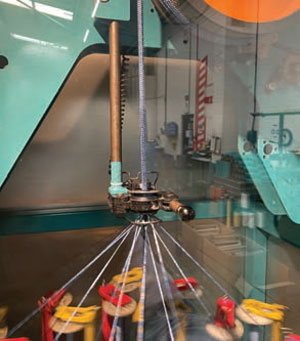 The same rPET material used in Blue Ocean Dockline has recently been combined with Bio-Dyneema to produce high-load-bearing halyards and sheets, with the MGP Racing 100 cover available in rPET Blue Ocean yarn and ready to be combined with any Bio-Dyneema core. These products are unsurprisingly being specified by some of the industry’s most ecologically minded boatbuilders, including GreenBoat’s groundbreaking Flax 27 daysailer and the stunning Lyman-Morse 46 cruiserracer. The durability of the rPET covers is currently being tested on the mainsheets of the Clipper 70 fleet, with the objective of using the product extensively during the next edition of the Clipper Race, and there is currently every hope that rPET can match the durability of traditional polyester covers.

The highest performing rope covers traditionally use a blend of polyester and higher-tech materials to deliver additional heat or abrasion resistance or to improve grip, and the same is possible with rPET Blue Ocean Yarn. Marlow Rope’s Grand Prix series of ropes are fully customisable, so Blue Ocean Yarn can be now be blended with Technora, Vectran or Zylon (PBO) to deliver the performance required for almost any job on board.

Marlow Ropes has proved that its ropes have what it takes to compete at the very highest level of the sport, from Olympic sailing (as official suppliers to the British team and other individual competitors from around the world), to the America’s Cup (as official suppliers to American Magic), to the Imoca fleet (as official suppliers to 11th Hour Racing Team, Team Malizia and Pip Hare’s Medallia). The company now makes 52 per cent of all its leisure marine ropes from recycled, sustainably produced materials and has plans to keep on increasing that number. Whether you’re buying control lines for kitesurf gear, mooring lines for a superyacht or virtually anything in between, there is now a highperformance, eco-friendly Marlow rope that will do just the job.