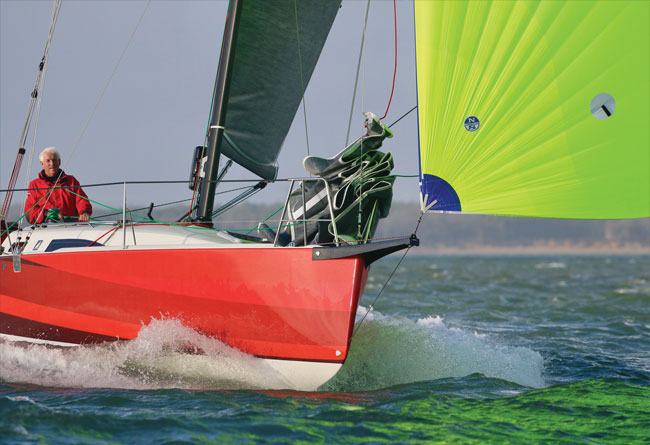 J/Boats is one of the world’s most successful brands, turning out a string of IRC winners. The new J/99 looks set to follow suit. In the shorthanded arena this one could be a killer… in the best possible way, of course!

The new J/99, built by J Composites in France, is J Boats’ answer to extensive customer demand for a smaller ‘adventure racer.’ True to this globally successful brand’s fundamental philosophy, it has an allround performance hull, rather than a boxy, hard-chined body with squat, Open-style stern sections like so many boats on the racecourse today.

The 32.6' J/99 is equipped with a powerful, easily controlled keelstepped rig, which optimises the boat’s reaching and downwind sail configurations. As a result, the J/99 is designed to plane in 17+ knots of breeze, but won’t drag extra wetted surface in light airs. It is designed to be IRC/ORC rating friendly, not too far from the successful J/97 but longer on the waterline with less overhang. The trial certificate for boat number one, which we sailed at the turn of the year on the Solent in seven to 10 knots of chilly breeze, comes in at 1.015, comparing favourably in between the JPK 1010 (about 1.006) and the Jeanneau SunFast 3600 (around 1.040).

The popularity of short-handed and solo racing is growing by the year. Witness the strength and size of the 53-strong Class 40 fleet in last year’s Route du Rhum – Destination Guadeloupe, the de facto pinnacle solo ocean race. The Figaro class in France and race promoters OC-Pen Duick are looking to tap into the apparently growing pool of amateur solo racers who want to do La Solitaire-style stage races mirroring Grand Tour cycling L’Etape events.

For those who can afford the time away from work, early retirees and those who just make it work, the French Transquadra race – for sailors aged over 40 – has gained notable niche popularity. RORC series races are seeing a steady rise in numbers competing two-up: nearly 60 duos raced in the IRC Two- Handed Class in the 2017 Rolex Fastnet Race. And inshore round-thecans racing, too, is seeing a sharp spike in those choosing to go doublehanded. With three months to go until Easter’s Spi Ouest-France Regatta, there are 65 pairs already entered, compared with 50 or so signed up for fully crewed classes.

Main picture: a new J/99 planing at 17+ knots, but good design means that it doesn’t drag around extra wetted surface area in lighter winds. It’s a true cruiser racer, ideal for shorthanded ocean passage racing yet easy enough to sail as a family cruiser with good headroom and a suitable level of comfort and fit-out below.

Already the signs for the J/99 are promising. From the renderings alone, some 15 boats were preordered and another 15+ added to the pipeline since the Paris Boat Show. To date, it appears that at least 50 per cent of those orders are for owners already committed to short-handed sailing or moving in that direction from bigger boats. In IRC/ORC fully crewed mode, the typical complement will be six, compared with seven for the J/109 and most other comparable boats.

The J/99 hull shape represents incremental changes to the J Sport genre. It has a slightly wider beam carried further aft and is a bit flatter in the stern sections – similar in subtle ways to the recently launched J/121, which was developed concurrently. It offers a little more form stability than its predecessors when heeled and yet does not incur much more wetted surface area.

Full headroom and the required saloon volume means slightly more hull rocker than the flatter-spined, full-planing, fast-reaching shapes of the J/70, J/88 and the wonderful, long-legged J/105, whose legacy the J/99 would be proud to rekindle.

The J/99 is designed to be a powerful compromise between the upwind-downwind boats that rate well under IRC and ORC and the fast- reaching A-sail boats that have always been punished under most rating rules. Unlike most comparable 33-35ft production yachts, the J/99 planes in 17 knots of wind and then goes faster, but it does not appear to be punished under the prevailing rating rules.

This is the first series-produced J design to come as standard with a fixed, mid-length bowsprit rather than the trademark retractable sprit. This setup makes it easy and simple to fly asymmetric gennakers (for light-air VMG mode and offshore strong-wind planing mode), while also allowing the European shorthanders’ preference for conventional pole and symmetrical kite in ‘nonplaning’ mode.

The boat we sailed has a starter inventory of five headsails plus a traditional aspect ratio mainsail – no added roach means simplicity, with no backstay snags. The headsails are a Code 2 and a Code 3.5, which is a heavy-weather jib that drops with a slab reef to Code 4. There is a Code 2 symmetrical spinnaker, a Code 3 asymmetric kite and a cableless Code Zero, which allows a little projected luff area and trims more like a regular A sail than a straightluffed headsail.

The look and feel is completely J Boats. It is all super-simple and functional, with minimal clutter and no extra string. The free-floating jib trim ring is cleverly set with swivel bases on 8:1 inhaulers that are controlled off a short track. All the key power controls are worked from the windward side by one person: simply tap in the autopilot and move forward around the traveller!

If this all sounds very gung-ho, bear in mind that this setup also delivers simplicity and control when cruising short-handed. The J/99 is a very easy-to-sail, multi-purpose, well set up high-performance cruiser with the accommodation to match. Weekends away with friends or family, fully crewed or shorthanded, are back on the agenda. If you have a taste for adventure, that primal need to get out of your comfort zone will soon prevail again!

Increasingly, the racing season spans Easter to June and September to October with time off for holidays in between. Boats like the J/99 revert to being used as fast cruisers in the summer, when comfort-enhancing features – headroom, natural light, stowage space, proper bunks, cooker, nav station – are appreciated. That said, there’s also an appeal in going a bit Spartan now and again, as long as you can make good coffee and heat nice pre-prepped food.

There are two big aft cabins and two good sea berths in the saloon. Further boosting the level of comfort down below, with no aperture for a retractable pole and a completely sealed mast at deck level (all cables exit above deck), the J/99 could be the driest J yet!

The T-shaped cockpit is big and easily worked with plenty of space for the helm at the back of the boat. Twin rudders are an option, as is wheel steering. The standard backstay is a powerful 48:1 doubleended cascade system, although a hydraulic backstay is also available.

The custom-engineered mast section from French maker AG+ Spars offers impressive longitudinal stiffness at a low all-up weight. It incorporates a standard integrated boltrope-style track like the J/112E, but also accommodates the Antaltype mainsail sliders preferred by most short-handed and solo racers.

Below: the spacious T-shaped cockpit is uncluttered, smartly laid out and easy to work with tiller steering as standard or the option of a wheel. Twin rudders are another option, but even with a single rudder this boat remained stiff and responded positively to the helm when pressed on a tight reach in 12-14 knots of breeze. 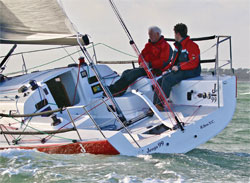 IRC optimisation has recently favoured flat, bulb-less keels over the more popular fin and bulb. On the boat we sailed, the choice was made to use this style of all-lead fin, which clearly worked well on the J/112E World Championship-winning J/Lance. This means a slightly heavier keel and a deeper draught of 2.1m (6.9ft) compared with the 1.9m (6.5ft) standard keel, which has a cast iron fin with an integrated lead wedge on the bottom.

Our first sail suffered with a lack of breeze, made doubly frustrating as two days earlier the first Solent shakedown enjoyed 22-24 knots and sunshine. Sailed two-up, the boat was well-mannered and straightforward, lifting its bow clear at 14 knots of boatspeed and apparently easy to push harder and faster.

We had a much more sedate eight to 10 knots with flat seas and wintery skies, but nonetheless, the J/99 proved to be easy to set up and sail and eager to please in the light winds. Upwind it was close-winded but with a firm groove, happy to climb off the keel as soon as the flow was attached, with notably easier downspeed than on a narrow chord sportsboat-style keel. It felt stiff once on a slight heel, accelerating slightly rather than tipping. For all that, we were just finding initial settings, it was very much plug and play.

Tacking solo was easy in the light breeze: set the new jib sheet to a rough trim, tack on to it, the headsail backs as you cross the boat, release the old sheet, step over, watch the trim on the new tack and click on the headsail as the boat accelerates, with sheet and inhauler to hand.

The Code Zero gave plenty of extra grunt over an impressive range of wind angles and speeds. This setup, with some luff projection, is again about maximising the range of the sail and minimising the need to peel to a kite. Pressed on a tight reach, with the apparent wind up to 11 or 12 knots, the J/99 seemed to remain stiff, answering the helm positively and easily with ample rudder area. I’d be interested to see how many owners choose the twin rudder option.

What was most impressive was the combination of J Boats’ reliable performance and the sensation that there is easy speed to come, all coupled to a solid, simple setup. There is no desire or need to overcomplicate things, to tweak for the sake of it, which makes it a lot easier to achieve optimum trim. One would imagine these findings will be replicated offshore, in which case the J/99 will be well worth watching.