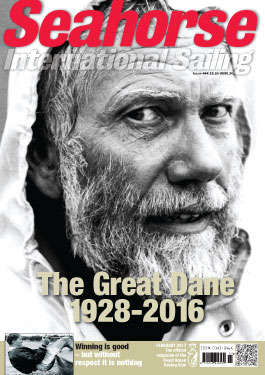 Not so chilled in Barcelona
A good result for offshore sailing emerges from an unnecessarily messy process. ROB WEILAND

Twenty five years of progress? – Part 2
ANDREW MACFARLAN of Red Bull concludes that while one-designs play a valuable role it is the development classes that keep sailing interesting

Function not fashion
BRETT BAKEWELL-WHITE did not create his ‘new’ 98-footer to shock, rather as a pragmatic solution to complex problems. IVOR WILKINS

Tacking now
Or in at the deep end… having been forced into some unplanned fast-learning in the art of shipping race yachts around the world, Team Vestas’s former navigator Wouter Verbraak has joined Dutch group Sevenstar Yacht Transport to make a career of it

There is a choice
The world-renowned rope and cable innovators at Gottifredi Maffioli are enjoying fast-growing demand for their range of ‘mid-exotic’ but very high-performing Dyneema-based cables. And the majority of the Vendée Globe fleet understand why…

Stunner!
The new Botín-designed Melges 40 canting-keel one design may prove to be a major disrupter to today’s mid-size raceboat market – North Sails have been playing an integral role in the development of the latest flyer to emerge from the Melges stable

Design – Time for a truce?
GINO MORRELLI is one of a number of leading multihull designers concerned that things are getting more than a little out of hand

Seahorse build table – Rockin’ (all) around the world
The Fast40+ class now has a new fanbase… a long way from ‘home’. BRETT BAKEWELL-WHITE

Sailor of the Month
Two gentlemen of influence… and ability