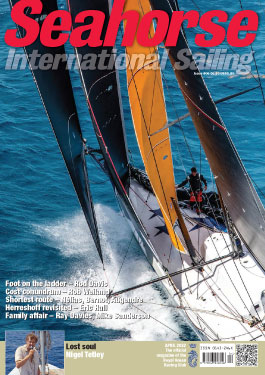 Secret sauce
The further your racing takes you from land the harder it is becoming to succeed without mastery of and access to the latest onboard routeing tools. FRED AUGENDRE, JEAN-LUC NÉLIAS, ALEXIS LOISON and JEAN-YVES BERNOT

Now for some sport

Update
Back to front… the remarkable Captain Nat and the thriving museum that pays tribute to his life and work… including the story of Amaryllis, the first ‘modern’ strut-and-brace catamaran that beat the AC72s to the punch by almost 140 years. Then again there was also the 210ft Reliance… now that is multi-talented. Plus controlling an AC75, and American Magic returns home. ERIC HALL, JACK GRIFFIN, TERRY HUTCHINSON and HALSEY HERRESHOFF

World news
Damn, some of those Kiwis are multi talented, and fast (we knew that, ed), FABRICE AMADEO’s foil shopping, 40 boats in the next Vendée Globe (!!!), another seven laps of the world (sic), Transquadra celebration, a Southern Ocean reminder and doing without the ‘buoys’. Plus the USA is getting out the glue again. IVOR WILKINS, PATRICE CARPENTIER, CARLOS PICH, DOBBS DAVIS, MARIA TORRIJO, MIGUEL ALLEN, RAY DAVIES… and MOOSE

RORC – Full on
One down, one record-busting big one to go JEREMY WILTON

Seahorse build table – Cart and horse… chicken and egg?
We have no idea about the main event but the first of the training-wheel models is nearly ready to go

Sailor of the Month
Talk about up-and-coming young talent. Plus there is talking green… and there is doing green