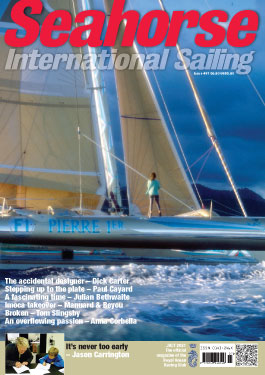 The accidental designer
Long before he was restoring beautiful old English houses DICK CARTER made a pretty good fist of yacht design. And JULIAN EVERITT was there

Learning from experience
From the sometimes crude overnight tweaks that could transform a skiff’s performance to hull tolerances of less than 0.5mm. JULIAN BETHWAITE

Match Race!
At anchor on a warm Clyde evening after some gentle racing to smashing a path around Ailsa Craig. MARTIN BLACK slips back to 1901

Very fine
After stepping off the foredeck of his Volvo racer JASON CARRINGTON soon established himself as one of the world’s finest builders of high-tech racing yachts. JAMES BOYD paid him a visit

The heart of the matter

Not all sails are created equal

There is another way

Update
Getting that silverware flowing again, the latest attempt at setting an America’s Cup Framework Agreement… and nationality controls – the good and bad. Plus looking ahead to a very different Olympic Regatta, we hope, and a new offshore one-design initiative… or do we have the answer already staring us in the face? JACK GRIFFIN, TERRY HUTCHINSON AND JON EMMET

IRC – Records for all
An initiative intended to get more people out on the water more often must be a good thing. CHARLES DARBYSHIRE

Seahorse build table – What’s green and goes fast?
Another good reason to back a two-handed medal

Sailor of the Month
And without them nothing would ever happen