Sometimes only the (very) best will do 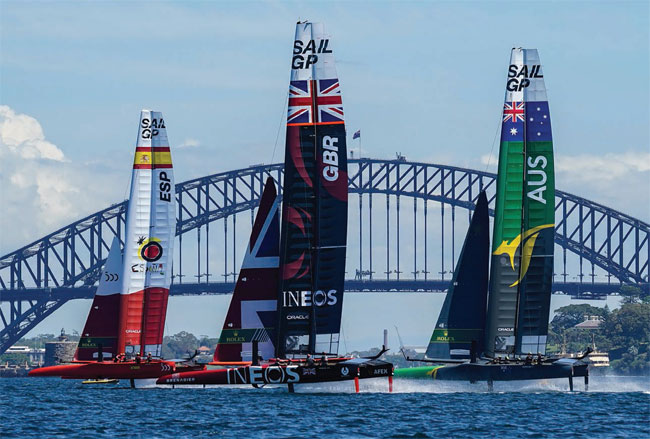 Doyle Sails’ selection as official sailmaker to SailGP represents a significant step in the brand’s steady rise to international prominence in the past several years and reflects a cornerstone aspect of the company’s philosophy. Under the leadership of CEO Mike Sanderson since 2017, the emphasis has been on recruiting excellent people with frontline experience at the highest levels of the sport into the Doyle team combined with a strong focus on innovative, leading-edge design and manufacturing technology.

With fellow directors Richard Bouzaid and David Duff, Doyle Sails International set about populating its global network of 50 lofts in 18 countries with topline sailors across all aspects of the sport who add their own considerable experience and expertise to the products and service delivered to customers.

The SailGP partnership is a central part of the next step to get alongside major campaigns and events and turn their players into ambassadors for the brand. ‘We have worked hard on getting really good people working inside the brand,’ says Sanderson. ‘Now we want to grow our international network of believers using our brand. When somebody like SailGP’s CEO Sir Russell Coutts is a supporter, that is a powerful thing. Everybody knows about his engineering pedigree and his incredible attention to detail.’

As part of a separate arrangement, Doyle Sails has entered a support role with Peter Burling and Blair Tuke who are heading up the New Zealand SailGP Team, the newest signing in the SailGP global line-up. Add them to the likes of Tom Slingsby, Jimmy Spithill, Sir Ben Ainslie, Nathan Outteridge, Phil Robertson, Kyle Langford, Chris Draper and others and you have a star-studded pool of potential believers helping to spread the gospel.

Although Doyle Sails supplied SailGP for its inaugural season, the company had to compete against other applicants when the contract came up for renewal. After a comprehensive selection process, Coutts announced: ‘We had no hesitation selecting Doyle Sails for SailGP. We knew they had the expertise, technology and commitment to deliver on such a project. We also knew success would be just as important for them as it was for us. The result was that we had nothing but praise on the quality and service Doyle delivered.’

‘Doyle Sails is all about supporting sailors who share the same passion for sailing as we do,’ says Sanderson. ‘SailGP is the most exciting global racing league with a fleet of world-class sailors. It’s a partnership we’re very proud of.

‘These relationships often develop into win-win situations,’ Sanderson says, referring to the dialogue and exchange of ideas that inevitably flows when people passionate about the sport work alongside each other in major campaigns. ‘We can use their input to improve the product, which helps their programme and also helps us deliver improvements back into the sport. That excites me and that’s what we want to be about.’

Australian wing trimmer Kyle Langford is one example of how these relationships flourish and grow into diverse projects. Langford was part of the team that won the inaugural SailGP Championship in 2019. He was also part of the crew on Comanche, which was the first grand prix supermaxi to adopt Doyle’s Cableless sail technology. That involvement led to Langford and Tom Johnson (wing trimmer for the Denmark SailGP Team) working with Doyle Sails to develop a new Moth sail, which they raced at the 2019 world championships in Perth, with Langford finishing runner-up behind Slingsby in the 122-strong fleet and Johnson in the top 10.

‘As a result, Doyle have started producing that sail and marketing it in the Moth scene. They are just as motivated as we are as sailors, which makes it a fun collaboration,’ says Langford, who is also working with the 11th Hour Racing Team helping prepare an Imoca 60 entry in the 2022 Ocean Race.

‘Doyle are making huge inroads in the grand prix racing scene,’ Langford notes. ‘From my perspective, we have seen Doyle Sails produce results from supermaxis to Moths and also with SailGP. It is cool to see them developing in so many areas of the sport. They have an attitude of taking some risks and trying new things and it seems to be working well.’

In his SailGP role as wing trimmer, Langford may be expected to have a slightly disdainful view of the conventional soft headsails flying off the front of the hi-tech foiling cats. Not so, however.

‘The headsails are very important,’ he declares. ‘The jib is the first thing the wind sees as it comes onto the boat. The flow over the jib and how it interacts with the wing is crucial and that trim has to be absolutely spot-on.’

According to Langford, Doyle’s Structured Luff technology provides significant advantage on SailGP’s F50 cats. ‘Under the one-design rule, we have strict limits on headstay tension,’ he explains. ‘To be able to unload the forestay and transfer the load onto the headsails is a big gain.’

This feature played a significant part in Doyle Sails securing the official sailmaker designation with SailGP, according to the league’s tech team operations manager, Brad Marsh.

‘Catamarans tend to rack and twist under sail, which can transfer significant loads onto the headsail. Under those situations, standard jibs could just blow apart. From our point of view, the Structured Luff system ticks many boxes and is fit for purpose. It also enables their sails to operate through a wider wind range. 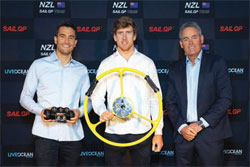 Above: Doyle has also entered into a support arrangement with Peter Burling and Blair Tuke, leaders of the New Zealand SailGP Team, who have adopted a notably high profile stance on environmental sustainability.
Below: according to wing trimmer Kyle Langford, the conventional soft headsails flown by the hi-tech SailGP F50s are not an anachronism. The flow of wind over the jib and how it interacts with the solid wing mainsail are absolutely crucial. And the ‘billboard effect’ graphics on the boats’ wings are another Doyle innovation. Printing intead of painting them achieves a significant weight saving in a place where it really matters 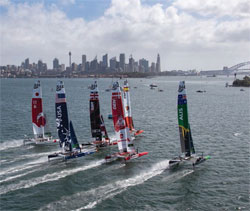 ‘We have to keep a close eye on operating costs, so sails that operate over a wider range mean smaller inventories, which lowers capital expenditure. As customers, that is definitely something we put a lot of emphasis on.’

With competition in the eight-team fleet becoming keener every year and the number of events expanding to eight in Season 2, durability is just as important to the teams. ‘The sails have to last the whole season,’ says Langford. ‘We know the last race of the season is going to decide the title, so we want our sails to be in great shape right through to the end.’

Under a strict one-design regime, another factor crucial to the teams is total belief that every element on every boat is absolutely equal. ‘SailGP conducted a rigorous due diligence analysis of our ability to manufacture sails under a very strict one-design model,’ says Sanderson. ‘They found our level of manufacturing accuracy to be extremely high.’

Less about sailing performance, but still important in the overall SailGP relationship were two additional factors, one to do with commercial and marketing considerations and the other regarding the environment. ‘A big part of SailGP is about branding and creating a visual wow factor,’ explains Marsh. ‘Our sails are very much part of that billboard effect and Doyle’s ability to print directly onto the sails was a major plus for us.’ Sanderson says ‘this is an area where we have invested a lot of effort. It was used to great effect with the graphics for Alex Thomson Racing on Hugo Boss in the recent Vendée Globe Race.

‘We can do pre-lamination printing directly onto the sail material to the same quality as canvas wall art. It is seriously cool and has huge advantages over painting the graphics. For a start, there is a significant weight saving. Printing works out at 7g/m2 compared with 25-30g/m2 with paint.

‘Also, it is much more accurate. The customer can specify exact pantone colours. They send us a digital file and it is printed to their precise specification and design. There is no guesswork or artistic licence.’

Given the materials involved – carbon, plastic, aramids, synthetic glues – the environmental factor is more about a commitment and a work-in-progress than about instant delivery. ‘As an industry, we have a lot of work to do in this regard,’ Sanderson acknowledges, but says Doyle is fully on board with SailGP’s Race for the Future vision.

Several lofts around the world are operating at zero carbon levels and the majority are operating close to carbon neutral. Manufacturing waste minimisation and ethical product sourcing are also embedded in company policy.

‘We are looking at every aspect of what we can do, whether it is re-using materials, how we package and ship products, whether we can switch from plastic release liners to biodegradable materials and so on. It is about recognising the issue and then committing to a progression in the right direction.’

This was also a matter high on the agenda in Burling and Tuke’s alignment with Doyle Sails. The Kiwi duo has adopted a high-profile stance on environmental sustainability.

‘We are stoked to have Doyle Sails on board with the New Zealand SailGP Team,’ says Burling. ‘To have a world-class sailmaker that’s owned and operated out of New Zealand and shares our environmental values is a pretty special alliance to have.’