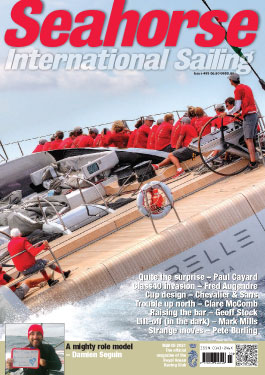 All the answers?
CHARLIE DALIN

Catching the mood
A tiny silver sliver from that which will not be named has turboed two-handed sailing. And now it’s official. LARRY ROSENFELD

The great divide – Part I
Put together a wonderful designer, a highly competitive owner… and a Royal Yacht. CLARE MCCOMB

On arrive
At least 15 new Class40s (sic) are going to be launched during 2021… all scows of course. FRED AUGENDRE looks at some very rapid development and some likely frontrunners

The missing piece – Part II
And it’s time for KOSTECKI, SPITHILL and COUTTS to learn how to race a multihull (and improve their swimming). ROGER VAUGHAN

IRC – The wrong direction?
More sails for a Thursday night race than a lap of the planet. Surely not? JAMES DADD