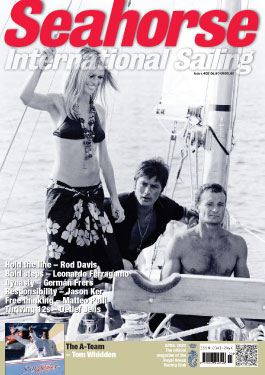 A question of balance
ROBERT DEAVES

Time to take stock
When someone else has a go at adding a different keel to your own well-proven yacht design… then it falls off, well, that is not helpful. JASON KER

Phenomenal phenomenal
TOM WHIDDEN is the sailor who was closest to DENNIS CONNER through that extraordinary America’s Cup career. He talks to his Magic Carpet3 shipmate BLUE ROBINSON about the pain of Newport and getting it right in Fremantle

You’ve got it (so use it)
RICHIE WILSON has done extraordinary things during his two Vendée Globe campaigns. BRIAN HANCOCK suggest others should follow his lead

Down to the detail

Update
Going bonkers with DON MCINTYRE, lifting smoothly with TERRY HUTCHINSON, nailing (more of) it down with JACK GRIFFIN, clearing it up with ANDY CLAUGHTON, remembering our friend PAOLO MASSARINI and the audience wades in on stinky ribs and low-hanging fruit

Rod Davis – Hold the line
Make the plan, don’t be phased, focus on the war

Seahorse build table – Now there’s a thought
But why did it take so long... MATTEO POLLI