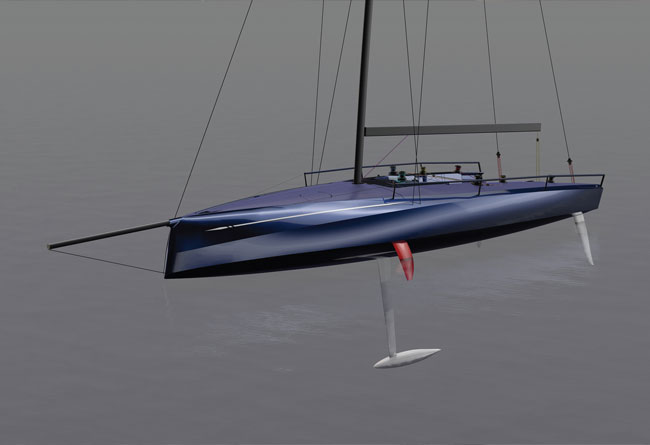 What has 36ft, a reverse sheer like a narwhal’s back, a dreadnought bow and chamfered shoulders, nine-foot draught, whale fin rudders with frontedge tubercles, a five-degree raked and fully adjustable HR40 carbon mast, a transverse sliding C-foil that jabs out of its topsides like extendable fangs – and no accommodation whatsoever? The new ClubSwan 36 looks breathtakingly extreme.

Its vital stats – SA/D of around 50 and ballast ratio of 47 per cent – promise interesting performance. And that’s without counting the tonne or more of dynamic lift that the foil generates on a broad reach with 15° of heel. Hard on the wind and heeled a bit further, that same foil produces so much sideways force that you’re looking at negative leeway. Judging the right moment to tack, to lay a windward mark without overshooting it, requires you to recalibrate one of the basic instincts of sailing.

The Heritage
It’s easy to forget that this rocket ship isn’t a one-off. It’s the latest move in a long and very successful design evolution by a major production boatbuilder – a marque with a peerless heritage in racing. The Swan that started it all back in 1967 and won every race at Cowes Week the following year was also a 36. Nautor’s new 36ft one-design might seem a far cry from that classic racercruiser and in most respects it is, but to compare them like that would be missing the point.

Main picture: it’s a Swan alright, but not as we know it... the radical new ClubSwan 36 is the latest step – more of a big leap, really – in Nautor’s five decades of yacht design evolution from the S&S designed ocean racing Swans of the 1960s to the cutting-edge inshore racers that define the ClubSwan marque today. Despite their differences, all racing Swans share a common heritage. The first foiling ClubSwan is designed to skim rather than fly, which Nautor says will allow amateur crews to enjoy safe sailing at 20 knots plus... 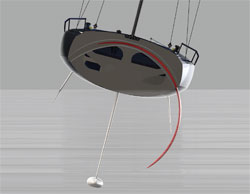 The original Swan 36 was groundbreaking technology in its day and subsequent Swans won the Admiral’s Cup, the Whitbread and more. Fifty-two years on, the way we sail and the boats we race may have changed but the same enthusiasm and belief in innovation that created the original 36 are still driving the development of the latest ClubSwan yachts, which are still state-of-the-art racing machines.

In recent years the introduction of highly successful ‘owner-driver’ one-design classes – the Swan 45, ClubSwan 42 and ClubSwan 50 – has propelled Swan to a new level, with an impeccably managed regatta circuit (and social programme) designed to foster fierce but friendly international competition. Annual leagues of regattas in the Med and now also in the Baltic lead up to the biennial Nations Trophy world championship regatta.

The ClubSwan 50 was a bold move away from the traditionalist’s ideal of Swan and the new 36 is a big leap further in the same direction: moving with the times, away from the 20th century focus on Corinthian ocean passage racing and towards the short-and-sweet, fast-paced inshore regattas that are more attuned to the lifestyles of today’s amateur sailors.

The Design Team
When Nautor commissioned Olin Stephens to draw the original Swan 36, back in the mid-1960s, they picked the world’s pre-eminent yacht design team. Five decades on, Nautor vice president Enrico Chieffi assembled a “dream team” to design and develop the ClubSwan 36, adding his own Olympic and America’s Cup experience to the mix.

Juan Kouyoumdjian was briefed to design a yacht akin to a modern supercar, with a delicate balance of top performance and impeccable handling. Giovanni Belgrano was drafted in as principal engineer, bringing a lifetime of experience at the cutting edge of marine composites to the project. Fourdecades experienced engineer Hervé Devaux developed the rig. Juan Pablo Marcos, a naval architect and professional grand prix sailor, worked closely with Juan K’s team to perfect the deck layout and ergonomics. The result of all this talent, project-managed by Nautor’s ClubSwan product line leader, Philippe Oulhen, is a truly remarkable boat.

The Hull
In essence, it’s more like a large, high-performance dinghy than a small yacht. Juan K’s design has a fine entry with an inverse bow and is chamfered at the shoulders to save weight, reduce aerodynamic drag and lower the centre of gravity. There’s minimal rocker and a flat run aft to broad, powerful, hard-chined aft sections. The large cockpit is open at the stern. The deck-stepped mast is just a little way forward of the ultra-high aspect keel fin and almost directly above the C-foil, which exits the hull just above the waterline on both sides.

With the C-foil deployed, the boat will skim rather than fly. On a reach with 10° of heel it can generate a lift force equivalent to more than 40 per cent of the boat’s displacement. According to Swan, this will enable crews to achieve speeds of more than 20kts in complete safety.

The hull structure, including the keel box and C-foil casing, is made of E-glass and epoxy with unidirectional reinforcement in load-bearing areas and carbon capping for extra stiffness. The structural components are infused and cured separately, then bonded into the hull with epoxy adhesives under vacuum pressure.

The Rig and Sails
The rig will reward proper tuning and allow skilled sailors to achieve top-notch performance. Chieffi and Kouyoumdjian, both former Olympic Star sailors, briefed Hervé Devaux to design a dinghy-style rig inspired by the Star with a fully adjustable carbon mast – as tweakable as possible, with mast bend, rake and pre-bend controlled by runners, deflectors and a moveable mast step chime. The rig geometry is simple: roughly three-quarters fractional with just one set of spreaders, subtly swept back, with a shroud base barely aft of the mast. This setup allows a great deal of adjustment under way and will require active tuning and shaping. The lateral shrouds are stainless steel rod; the runners and forestay are PBO fibre. Dyneema and Spectra running rigging is supplied as standard, plus a carbon box-section boom with an internal clutch for reefing line and halyard lock systems for the mainsail (full hoist and reef) and jib.

Leading sailmakers were involved in the rig design, but owners can choose whichever sailmaker they like. Class rules limit the sail inventory to one 58m2 reefable mainsail, a 33.5m2 jib for winds up to 15kts true, a smaller jib for heavier weather and a mighty 134m2 asymmetric spinnaker, which should cover the typical wind range for racing up to 25kts. The smaller jib can be left up while sailing downwind.

The Deck Plan
A lot of study went into designing the deck plan and optimising the positions of the winches and control lines. The bowsprit is on the centerline, recessed into a structural channel in the foredeck along with its retriever circuit and covered with a lightweight, removable composite panel. Halyards and control lines are led aft under another removable panel, leaving the deck completely clear and reducing the penetration holes for keeping splash outside the boat.

Above: the continuous curve of the large C-foil serves a dual purpose. When sailing upwind and well heeled, it generates mostly sideways force, which according to Swan will result in negative leeway. On a reach with less heel it mainly produces lift: up to 40 per cent of the boat’s displacement.
Below: the bowsprit sits in a channel recessed into the foredeck, very slick and with no leaks down below 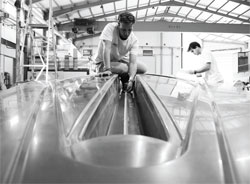 There are seven winches, all Harken: three two-speed winches on each gunwale (one for runners, one for mainsheet and one for jib and kite) and one winch in the cockpit, next to the companionway and offset to starboard. This handles the halyards, some of the control lines and the C-foil, which is hauled manually from side to side with a powerful block and tackle led to the winch. Most of the lines are doubleended including the mainsail cunningham, mast deflectors and boom vang – another block-andtackle – which are all led aft to the mainsheet winches. The mainsheet traveller is mounted on the aft edge of the open cockpit and led forward to the trimmer’s position amidships. The jib sheets cross the cockpit to be trimmed on the windward side.

The Interior
There’s plenty to look at beneath the sliding companionway hatch if you’re interested in composite engineering – check out the C-foil case and structural carbon capping – but only sitting headroom and no accommodation. There is space for the crew to shelter between races and removable sea-berths can be fitted for mid-range offshore racing. With a deck-stepped mast and no apertures other than the companionway, the interior is completely watertight. The bulkheads forward of the rudders are watertight for safety offshore and the engine is mounted centrally, under the cockpit, with access from the front and both sides.

The Engine
The ClubSwan 36 is propelled by electric motor or an optional diesel engine. The 20hp-equivalent Torqeedo Cruise 10.0 is managed by a dedicated computer and powered by a state-of-the-art lithium battery from BMW, which boasts a 70 per cent higher energy density and 50 per cent longer life cycle than a typical marine lithium battery. In race mode, the drive shaft and folding prop retract into the hull. When sailing but not racing, the spinning propeller recharges the battery. Additional batteries or a generator can be fitted to extend the boat’s range for delivery.

The Crew and the Class
The ClubSwan 36 is strictly an ownerdriver one-design class, conceived with mixed crews of amateur and pro sailors in mind. The boat is designed for a full crew of six – a tactician in charge of the runners, sitting aft of the helmsman and a mainsail trimmer, kite trimmer, jib trimmer and pitman up front. Class rules permit three of the crew to be pros.

The first ClubSwan 36 will be launched this spring in the Med and available for sea trials from May 2019 onwards.