Man at the centre
There is nobody in a better position to know what's really been going on in the America's Cup these last few years than three-time Cup winner GRANT  SIMMER, recent head of TeamOrigin

The real deal – Part I
CARL RYVES is one of the most iconic and widely-respected of Australia's many fine sailors... he was also a close confidant of the great Ben Lexcen. BLUE ROBINSON correctly reminded us that this story now needs telling...

Rebuttal
DR BRUCE PARSONS of Newfoundland's legendary Institute for Ocean Technology, the tank facility of choice for numerous successful race projects, feels that it is time to lend a sense of proportion to debates over the merits of CFD

Update
A new way of life beckons for TERRY HUTCHINSON, ANDY HEMMINGS asks if he is Facebook or Flintstone, the magnificent Barcolana, marriage news, looking forward to the new Transatlantic series and Valencia mayor Rita Barberá is definitely not a Facebook friend of either Russell Coutts or Larry Ellison...

Seahorse build table
– Kid sister
Another Lombard design, but in this case simpler, faster and designed for rather shorter distances

RORC news – Love is in the air
EDDIE WARDEN OWEN

Sailor of the Month
Making some major contributions... 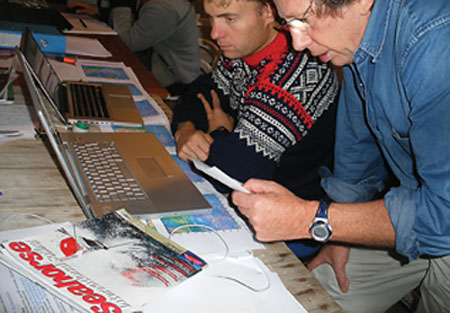