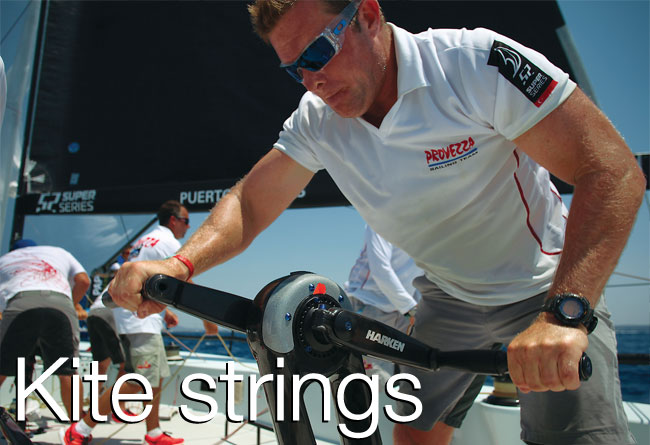 Full hoist to full douse in under four seconds...

The TP52 Class is perhaps today’s most important platform for research and development projects in grand prix monohulls. In 2015 nine new boats were built, creating a great opportunity to develop new products and systems to increase performance. Harken accepted the challenge and applied their engineering experience to developing new solutions for winch and pedestal transmission systems, hydraulic systems and block designs.

Another area to which Harken dedicated R&D resources is the spinnaker retrieval system, commonly called a string drop system. Dousing the spinnaker, whether symmetrical or asymmetrical, has traditionally been a slow and an occasionally even dangerous manoeuvre. There is a lot to be gained at the bottom mark if the kite can get safely below without having bodies forward of the mast that would be better applied turning winches or bent over lifelines. 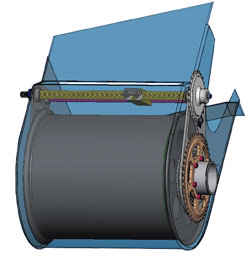 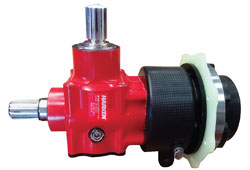 Main image: Harken Air pedestal on Provezza.
The package (top) created for Alinghi’s winning AC32 campaign in 2007 was the first pedestal-driven drop system, with a moving feed (on the yellow track) which ensures the line is wound flat on the drum. Harken’s 1:1 Y-Box bevel gearbox (red, above) fits directly onto the hub of the carbon ratchet line drum below deck (below, Provezza) 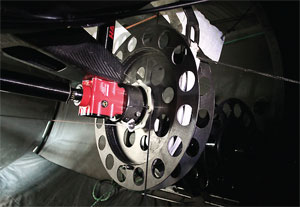 The history of the offshore string drop
Harken began developing spinnaker retrieval systems with America’s Cup teams as far back as 2000 in Auckland. Spinnakers were retrieved by running a 6mm diameter drop line from the sail down the forward hatch, back to the aft bulkhead, and then back up into the cockpit and onto a large pedestal-driven, self-tailing halyard winch specifically designed to accommodate ropes between 6 and 12mm.

In 2007, for the 32nd America’s Cup in Valencia, Harken developed more advanced custom drop solutions housed entirely below deck where they could be hidden from competing syndicates. Onboard the winner Alinghi Harken had created the first pedestaldriven captive-drum drop system, which spooled the drop line in a single untangled layer along the drum.

Into the TP52s
Not long after 2007 the TP52 Class introduced this drop system technology and manoeuvre into their playbook. No doubt it took considerable practice to properly co-ordinate the timing of the tack line and guy release with the helm turn-down during the class’s spinnaker-pole era. This was even more important as, unlike the AC Class that preceded them, TP52s have stanchions and lifelines with a nasty appetite for sails.

In the beginning the teams developed their own drop systems independently, with varying degrees of success. Most of the boats started the process using the existing cockpit utility winch or an on-deck halyard winch.

The challenge with this winch solution was 1) you had miles of 6mm cordage in the cockpit after dropping the kite; and 2) the pit person had to be very fast in the pit to hoist the jib, unload the winch and then get it reloaded and ready for the drop. The tactical prospect of being able to keep the kite up and drawing, sometimes to within a single boat length of the mark, was so enticing that development was bound to continue.

Progress to date
Soon a few TP52 teams, where sailors coming out of the AC had seen the benefits of the below-deck systems and how well they kept the take-up line tangle-free and out of the fray, approached Harken. They worked with us to develop a new below-deck takeup system. The heart of the resulting solution is now a mechanical ratcheting hub that mounts directly to a gearbox and a large but lightweight carbon drum.

When engaged, the ratcheting hub prevents the drop line from unwinding, preventing sections of kite that have already been brought below deck from being swept back out of the hatch by breeze or water. Following the drop, in the process of tidying up, the sewer person disengages the hub to bring the kite back forward toward the forehatch for rehoisting. The retracting line stays either wound around the now free-spinning drum or slightly in tension between the drum and the centre of the kite now forward.

The red bevel gearbox with its 1:1 drive ratio was specially designed for this application. This gearbox is unique in having two disconnects that are linked to one control. Thus it operates as a ‘Y-Box’, where the crew is either grinding the winch or the drop wheel system – but never the two at the same time.

The TP teams are in different places in terms of the hardware they use at the hatch opening. These solutions remain unique to every boat and every project manager. The general trend has been to install a roller, often a Harken carbon drive shaft re-engineered to span the hatch or suspended from the underside of the deck just aft of the opening.

Most recently several boats have instead opted to incorporate larger radius hatch openings. This is simpler on the water and potentially just as effective. It just takes more time to create the tooling to form the amazingly fair hatch perimeter that is required.

These systems all integrate well with our various winch packages. Today Harken supplies winches to 100 per cent of the TP52 fleet, plus hydraulic systems driven by Harken MX Wing and Air pedestals were selected by eight boats; these pedestals offer the ability to accelerate output speed by a factor of almost three. This in turn rotates the carbon wheel very fast indeed, taking up the drop line and pulling the spinnaker through the hatch and down below within three to five seconds.

The future
For what other types of boats would equipment like this be appropriate? In fact, we’re already seeing racing monohulls of a wide range of sizes being designed and launched with these systems incorporated.

They are already well-developed in the Maxi 72 Class and are increasingly popular onboard custom and semi-production race boats between 40 and 50ft. Each design requires different sizing and system design, but all seek to apply the same general solution and are doing so with very positive results.