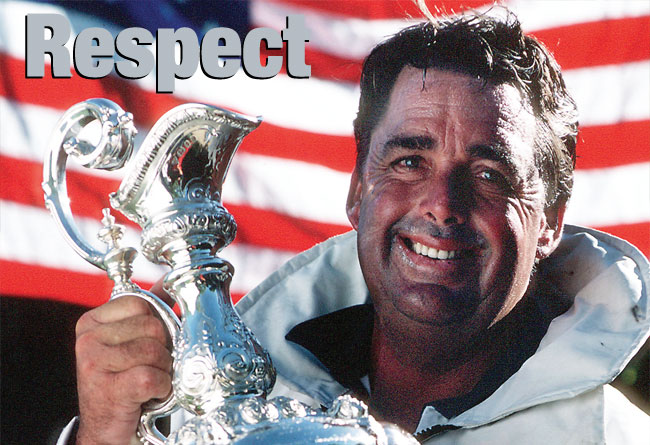 In every sport there are incredible stories to be told. From individuals who achieve their dreams with heroic effort, to those who have the simple pleasure of encouraging others to enjoy a sport and get them to the starting line. Within these stories are achievements that sometimes seem beyond the usual realms of possibility.

World sailing has seven new Hall of Fame inductees to honour at our 2015 conference. These individuals have all made a significant impact on the water, but also with their remarkable attitudes and dedication to sailing have had a similar influence onshore. They have in their own way helped shape the sport we enjoy today. 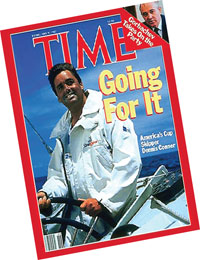 Ten America’s Cups, four Cup wins and 28 world championships, Dennis Conner arrived on the Cup scene in 1974 in a whirlwind, first as tune-up helm for Ted Turner, then replacing Turner at the wheel of Mariner before again being moved by the New York YC selectors onto Ted Hood’s successful Cup defender Courageous

Dennis Conner
If one is to think of the great sailors of the America’s Cup, one name springs to mind before all others: Dennis Conner (main picture, and right).

Conner, known as Mr America’s Cup to you and me, has experienced the full gamut of the Cup, as the defeated, the defender and ultimately for bringing sailing’s most famous – and most elusive – trophy back to the USA in 1987. Conner is also the skipper credited with turning the America’s Cup into a professional contest – his team training for 300 days each year for the 1980 defence.

Conner has also made his mark in sailing outside the Cup, with an incredible 28 world championship victories and an Olympic bronze medal from the 1976 Games. Among those championships is his legendary 1977 Star world title, Conner’s second in the class, won in Kiel with five straight race wins, a record that has never been beaten.

Alessandra Sensini
Alessandra Sensini is the most successful female Olympic sailor in history, with a total medal count of one gold, one silver and two bronze medals. Her remarkable achievements have covered three different classes within the windsurfer discipline. Her ability to remain at the top of sailing for such an extended period is tribute to her level of talent and dedication to her sport.

Harold Vanderbilt (1884–1970)
Harold Vanderbilt was a man of many talents. Along with his sailing successes, he was a champion bridge player (Vanderbilt influenced many changes to the rules of bridge which are still in force today), an author and a pilot.

However, it was his achievements in the America’s Cup J-Class boats where he stood tall, successfully defending the Cup in 1930, 1934 and 1937.

Vanderbilt was also instrumental in developing and promoting a set of racing rules based on his experience in the America’s Cup. It was through his efforts with the assistance of other visionaries that the modern Racing Rules of Sailing were adopted in 1960.

Sir Peter Blake (1948–2001)
Sir Peter Blake is one man who can truly be described as a legend of the sport. The New Zealander achieved greatness in many areas of sailing – from leading New Zealand to victory twice in the America’s Cup, to winning the Whitbread Round the World Race and holding the Jules Verne Trophy for the fastest lap of the planet under sail.

Sir Peter was also known for his efforts in promoting environmental awareness. Indeed, it was his pursuit of improved water monitoring that took him to the Amazon River in 2001 where his life was tragically taken during a pirate attack.

Sir Peter Blake was also the joint inaugural winner of the Rolex World Sailor of the Year award in 1994.

Buddy Melges
The Melges name has had a massive impact on modern sailing particularly with the family’s boatbuilding company.

Buddy has achieved competitive greatness in areas as diverse as Olympic sailing (bronze medal in 1964 in the Flying Dutchman and a gold medal in 1972 in the Soling), the America’s Cup (oldest helmsman to win at 62 years of age), numerous world championship victories in the Star and 5.5 Metre classes and finally as a multiple scow and iceboat champion. His contribution in being an engaged and fierce competitor across multiple classes as well as his ongoing developments in boat design have helped shape modern sailing.

Valentin Mankin (1938–2014)
Valentin Mankin, born in the Soviet Union, is still the only sailor to have become an Olympic champion across three different classes. Mankin won the gold medal in 1968 in the Finn class, gold in 1972 in the Tempest, as well as a silver medal in the Tempest in 1976.

He then won gold again in 1980 in the Star class. Mankin is also regarded in high esteem for his work ethic, his leadership as a coach and mentor and for being an all-round great sportsman.

Torben Grael
Torben Grael is one of Brazil’s greatest sporting exports. He is one of only three individuals to have won five Olympic medals in sailing, including two bronze medals, a silver medal and two gold medals across two classes (Soling and Star).

Further to this impressive record, Grael has also excelled in other areas of sailing. He has won both the Volvo Ocean Race (as skipper of Ericsson 4) and the Louis Vuitton Cup (as tactician on Luna Rossa). Torben has also won numerous world championships including in the Star class and 12 Metre class.

In recognition of his many achievements Grael was awarded the Rolex World Sailor of the Year Award in 2009.
Malcolm Page, chief marketing officer