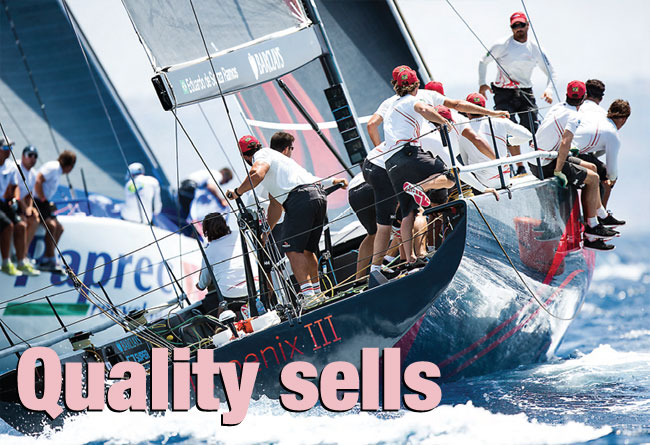 With eight new boats now in the pipeline for 2015, and still hoping the number will creep up, what to expect?

Of course the Botín-designed Phoenix gives us a pretty good idea of what the next generation will look like since she is designed to the 2015 TP52 Rule. After the final event of the 2014 Barclays 52 Super Series in Ibiza, Phoenix will be upgraded to full 2015 mode. Her bulb will be removed and a 15cm spacer will lower the bulb on the fin for an increased draft of 3.5m, making for a total bulb weight of exactly 3,800kg on a fin weight of 800kg. About 200kg of internal ballast will then be removed to bring her 2015 all-up dry weight down to the new class minimum of 7,000kg.

Visually the biggest change will be her 2015 mainsail. It will have a much bigger fat head, growing by 75cm from 1.25m to 2m in span and adding 4.5m2 of sail area. The changes will speed her up at all wind speeds and all wind angles, but of course this will be most visible downwind in a breeze. Expect the 2015 boats to plane earlier, longer and faster. Take a closer look and new too will be the composite headstay, facilitating higher headstay loads up to well over seven tons, plus a new checkstay arrangement effectively changing the way that the topmast is controlled.

It will be interesting to see whether the Phoenix deck layout will be followed by other Botín clients, such as Sled and Quantum Racing. And also the deck the Rolf Vrolijk design office will produce. Expect the new Vrolijk boats Rán, Gladiator, Provezza and Platoon to be closer to the minimum deck camber requirements and likely to sport even larger cockpits than Phoenix. Then again the Phoenix layout was chosen to produce a stiff and low vcg deck rather than just go for the rule minimum on standing headroom or rule maximum on cockpit size… which would be no side decks at all aft of 8.75m from the bow. Not that practical, I guess, so lots of design space and lots of room for input by the crew on how they like their working environment to be.

And after all this, no more room for improvement? Of course there will be. Development never stops. The TP52 Rule will be more or less fixed for the coming three years, apart from likely adjustments in displacement (expect another 100kg to be lost) and possibly further adjustments of mainsail area (the question is whether that 2m head is exactly right, or can we grow further?).

But by 2018 enough will have changed in design and equipment development terms to take further steps. Like permitting the use of Thin Ply Technology materials and techniques in primary construction and accommodating new developments in equipment, like servo valves and electric disconnects in the winch systems. Which is a first step towards developing self-acting and then self-learning control systems is my guess.

Sailing at the big boat end is slowly but surely heading in the direction of what the automotive industry calls ‘advanced driver assistance’, based on intelligent sensor technology. ‘Advanced helm assistance’ or if you prefer ‘advanced trim assistance’ for sure on maxis and superyachts is the future. On racers like Mini Maxis and TP52s it will for quite a while be more a choice than a necessity. But once the old salts have retired and the generation used to computers in about everything they grew up with takes over, I feel it is unavoidable to see the chips stepping in further than just for tactical and navigational purposes. So never a dull moment and many decisions and new things to come… from 2018 also for the TP52s.

In 10 days from writing this the final leg of the four-event 2014 version of the Barclays 52 Super Series will start. Zenith Royal Cup Marina Ibiza is a mouthful. It reflects our balancing act with sponsors, local support and venue choices for sailing and many other reasons, like glamour, logistics and sailing history. Ibiza is great fun, the Balearic Islands are for sure high on the top 10 list of yacht racing locations.

A good bet is that Quantum Racing continue to shine, certainly enough to add this year’s Super Series title to an already impressive record. It is a serious outfit, the extra pressure on their shoulders is being the team to beat. No excuse to lose is literally their choice of positioning the team and its individual components. That is not as logical as it sounds at first sight as top sport also requires the contestant to be relaxed. Maybe it is my imagination but they seem to be able to be more relaxed when the team owner, recent Seahorse Sailor of the Month Doug DeVos, is with them. The eye of the master…

All in all it seems ages ago that we started 2014 at Key West Race Week, then Miami in March and across to the Med for Capri, Porto Cervo, Palma Mallorca and Ibiza. So many made this year’s racing possible and first and foremost enjoyable, thanks to all.

The reward for sure is foremost in seeing the fleet growing, in number and in quality. 2015 will bring a five-event 52 Super Series, including the TP52 Worlds on the Bay of Palma, sailed from Marina Portals. With so many new boats it does not get any easier to be on the podium. Stay focused and relaxed, guys. Easy for me to say. I can hardly bear to watch the racing sometimes. Was never very good at the relaxed part, to be honest. Cannot wait to see the new boats and many new and familiar faces. The 52 family grows – great!