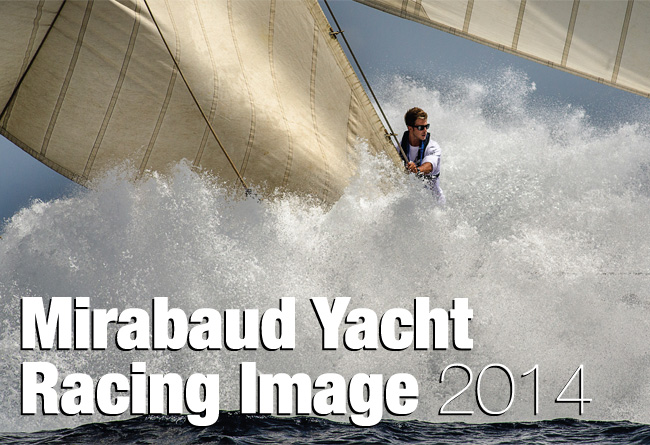 Alfred Farré: ‘Sailing boats are the most beautiful thing in the world’
Winner of the Mirabaud Yacht Racing Image award 2014 Alfred Farré (ESP) tells us about the beauties and difficulties of a job like no other

The Mirabaud Yacht Racing Image award revealed a stunning collection of images sent in by 120 professional photographers from 25 countries. Started in 2009, it is the world’s premier photography competition dedicated to the sport of sailing, celebrating the very best yacht racing image taken during the year. 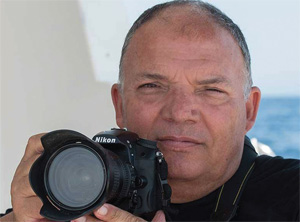 The winner, Alfred Farré, from Spain, received the Mirabaud Yacht Racing Image Award and a stunning Zenith El Primero Chronomaster 1969 watch for his picture of Mariquita, one of the most beautiful classic yachts, pounding into a wave during the Regatta Puig Vela Classica Barcelona 2014. French photographer Charles Marion won the Public Award trophy with his poetic aerial picture of a Wally playing with its own shadow.

Based in Barcelona, Alfred Farré has been a professional nautical photographer since 1984. ‘This job is all about passion, perseverance and an unconditional love for the beauty of the sea,’ he says. ‘It is almost an obsession.’

Farré says he often works 16 hours a day during events. ‘Before going to bed I need to charge my batteries, save the pictures onto a hard drive, clean the memory cards and prepare my equipment for the next day. But when people tell me that I am crazy I think about the Vendée Globe sailors, who only sleep a few minutes at a time.’

A professional photographer’s typical working day starts early in the morning with briefings, establishment of the day’s schedule and checking the weather. Then comes the time to go out to sea. ‘I frequently take 2,000 pictures in a day,’ Farré explains. ‘Then I need to make a fast pre-selection with pictures of the top sailors, which will be used immediately. Later on I can work more quietly, at my hotel, in order to select those pictures that will be sent to the organisation, the sailors and the sponsors. I also post them on my online platforms (personal website, Facebook, Flickr, Pinterest, Twitter, Instagram). I feel the need to share my work with the public, because I believe that seeing boats sailing is the most beautiful thing in the world.’

Alfred Farré is a passionate photographer who loves his job more than anything – yet he knows how demanding it is, and acknowledges that it is getting harder every year. ‘It has become difficult with the economic crisis, and the growing competition. It can also be dangerous: I have broken a rib, my leg twice, I lost eight cameras, was involved in a wreck and got scared on several occasions!’

Farré won the Mirabaud Yacht Racing Image award thanks to a picture taken during the Regatta Puig. ‘I had no official commitment, so I felt free to be more creative. My extensive experience as a photographer helped me to imagine the picture I wanted before I took it. Then when I saw it I thought I had a chance to win the Mirabaud Yacht Racing Image, but when I saw the quality of the other images I said to myself that even a top five would be amazing.’

To me the Mirabaud Yacht Racing Image is the Mount Everest, the Vendée Globe of photography. For 30 years I have looked up to Christian Février, Jacques Vapillon, Franco Pace, Carlo Borlenghi, Gilles Martin-Raget, Thierry Martinez, Nico Martínez, Barry Pickthall, Rick Tomlinson and many others. They have been my idols and I am still a fan. It took me three days to comprehend I had won the contest. I cried with joy and kept laughing! I went back on the contest’s website to look at the profiles and biographies of all the photographers who were in this year’s competition. I could not believe I had won.’

Sailing onboard Spindrift 2, the largest racing trimaran in the world, Yann Guichard finished second in the Route du Rhum- Destination Guadeloupe, just 14 hours behind race winner Loïck Peyron on Banque Populaire VII. Yann completed the official 3,542-nautical miles race at an average speed of 17.95kt. Today he looks back at what he accomplished and analyses the key moments of his Atlantic crossing.

Seahorse: Yann, how long did it take you to recover from the Route du Rhum?

Yann Guichard: Actually, it took quite a long time, both physically and psychologically. I would say at least one month. However, in terms of my morale it was much quicker, and I can really look back at this experience with happiness and pride.

SH: So you are not disappointed with your second place?

YG: No, really… no regrets. When I first spoke about this project nobody thought it was even feasible. I also knew that Banque Populaire and Sodebo were optimised for single-handed racing, and that they would be very fast. My goal was to finish on the podium and I have achieved it.

SH: During the first night Loïck Peyron tacked and sailed briefly towards the French coast, which gave him the initial edge. Did you consider a similar move, and did you know it was the thing to do?

YG: Yes, for sure. But it was simply impossible for me to tack at that moment, despite knowing that it was the right thing to do. The sea and wind conditions simply didn’t allow it. Spindrift 2 is 9m longer and seven tonnes heavier. This makes a huge difference in manoeuvring and the energy required to make it happen. Plus the second tack close to the French coast would have been too risky, again for the same reasons.

SH: When did you realise that Loïck would win?

YG: It’s never over until you cross the finish line, but I have to admit that I started to lose hope alongside Madeira. It took me four hours to hoist the enormous gennaker; it was horrendous. When dry, the sail weighs 180kg. And it was drenched… I lost an additional 40 miles to Loïck, then he reached the trades and got into full speed while I was still stranded. By then I knew it would be very difficult.

SH: What have been the main difficulties from a technical point of view?

YG: One of my two autopilots failed on day two. I knew that if the spare one also broke life would become very difficult! I was even wondering how I would bring the boat back at all! When this sort of thing happens you can’t stop thinking about it, and it was quite challenging throughout the Atlantic…

SH: What was the toughest moment of the race?

YG: The start was tough because many manoeuvres were required. When I tacked at Cap Fréhel, very close to the cliffs, I knew that if I missed my manoeuvre the race could be over. Similar scenario when sailing around Guadeloupe, just before the arrival. The final mark, in Basse-Terre, is just 300m from the shore and the pressure was intense. I probably did more manoeuvres around Guadeloupe than during the entire crossing.

There was also a scary moment two days before the arrival, when a squall hit me. The wind reached 30kt and suddenly the wind stopped. I started sailing backwards in 3m waves, with 1,000m2 of sail area deployed. At that point I feared that I was going to break the mast… and probably everything else.

SH: So would you sail this boat singlehanded again?

YG: Probably not, she’s not made for this. She’s too big, too heavy. Spindrift 2 weighs 21 tonnes. The other Ultime boats weigh 12-13 tonnes. Having said this, I would love to sail the Route du Rhum again, but perhaps on Spindrift 3…

YG: The main project now for Spindrift Racing is the Trophée Jules Verne, next winter. We will also sail the Décision 35 Ladycat, powered by Spindrift Racing, on Lake Geneva during the summer circuit, and will compete in the Tour de France à la Voile. But our main focus will be the round-the-world record attempt and we’ve already started preparing the boat for this. It’s an enormous task – those who have tried it before have needed two or three attempts to succeed. We’re currently building a new mast; we will have new sails and a new rig configuration. It’s a tremendous challenge for our entire team!