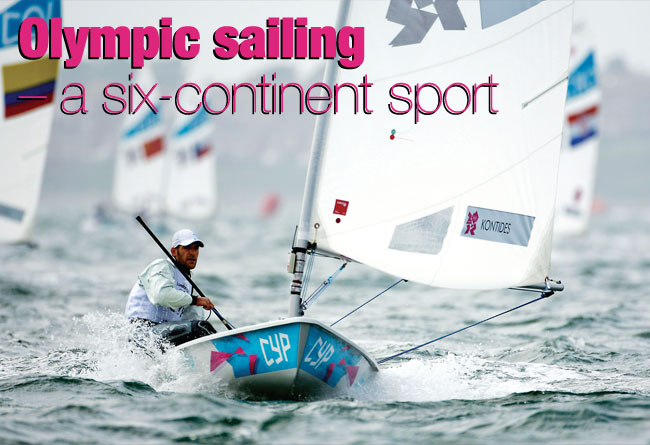 And sailboat racing is officially now a six-continent sport...

At the London 2012 Olympics the Laser fleet witnessed 48 sailors in as many nations competing, more than most Olympic sports achieve. The Laser Radial was not far behind with 41 national flags on the startline fighting for medals, a top-10 finish and personal bests.

While gold was taken by Australia’s Tom Slingsby in the Laser and China’s Lijia Xu in the Radial, a glance at the entry lists shows how widespread Olympic sailing has now become. Sailors from the Cook Islands, Guatemala, Kyrgyzstan, Malaysia, Monaco, Tunisia and Trinidad and Tobago ensured that every continent had an Olympic sailor at London 2012.

And they were not there simply to make up the numbers… the traditional powerhouses of Olympic sailing were upset in many ways as Xu claimed China’s first Olympic gold in a dinghy and Pavlos Kontides made a remarkable breakthrough claiming Cyprus’s first ever Olympic medal, silver, in any sport. Sailing in China and Cyprus found itself on the front pages thanks to the success of their Olympians and this will inspire young sailors everywhere.

As a lifetime participation sport, sailing is very strong in many countries, usually those with a tradition and heritage in the sport, a network of strong healthy sailing clubs, and a long coastline or plentiful inland lakes. A top priority for ISAF now is to strengthen the sport internationally, and help all the newer sailing nations build the infrastructure and lifetime participation that sailors in the strong nations enjoy.

The Olympics help raise the profile of the sport. The success of Pavlos and Lijia Xu can inspire young sailors in all continents. Through ISAF’s Emerging Nations Programme pathways are being created for sailors from all countries into the Olympics and beyond. The more realistic is that end-goal of Olympic participation the more likely that a young athlete from Africa is to choose sailing as their sport.

This is one of the reasons why sailing now has continental Olympic qualification for the Rio 2016 Olympic Games. At least one place in every event, and two in the larger fleets, is reserved for the top sailor from each continent. This also means that Olympic qualification regattas will be held on all continents – in Qingdao and Abu Dhabi for Asia, and Algeria and South Africa for Africa.

Sailing provides all nations with three opportunities to qualify. The top countries in each event qualified at the first qualification regatta, the Santander 2014 ISAF Sailing World Championships last September. The next opportunity will be at each Olympic class world championship in 2015. The final continental places will be decided late in 2015 or early in 2016, ensuring the door stays open for every sailor from every country. Looking further ahead, the young Optimist sailor in Africa now knows that he will have a genuine opportunity to qualify for the 2028 Olympics.

ISAF and the Olympic classes use this worldwide ranking as the basis for qualification to regattas with restricted entry, such as the ISAF Sailing World Cup regattas; meanwhile, many countries use it as a basis for selection between their sailors. Climbing the world rankings is becoming an essential element of any sailor’s Olympic campaign.

The winner gains the maximum points while points for finishing halfway down the fleet are half this maximum. This means that a good result at a 100-pointer will score more points than a poor result at a 200-pointer, so top sailors have to keep performing to avoid being overtaken.

Nearly one hundred 50-point regattas are recognised by ISAF in 2015 so entry into the rankings is relatively easy. But next comes the campaign to climb those rankings to receive invitations to restricted entry events like the ISAF Sailing World Cup…
Chris Atkins, ISAF Vice-President