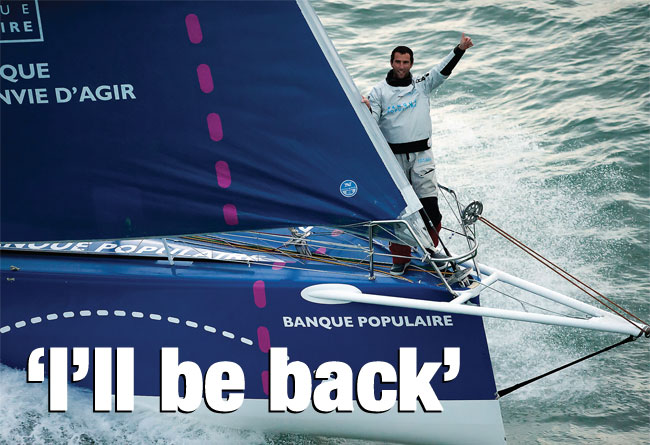 With arguably the best adapted and most proven shorthanded ‘Ultime’ multihull, Armel Le Cléac’h could legitimately dream of a Route du Rhum triumph, which would have beautifully concluded his 2014 string of offshore solo successes. Yet if instead of a Caribbean cocktail he had to stick to Breton cider, the man himself still has plenty to look forward to – the next Vendée Globe being top of his list.

We caught up with Armel just as he was taking delivery of the latest addition to the Banque Populaire fleet, a diminutive multihull that undoubtedly will provide an interesting visual counterpoint to her big sister in Lorient, where the team is based. ‘We’ve just received our new Diam24 trimaran, she was being hoisted onto the trailer as the phone rang,’ explained the skipper.

‘We’ll be doing Spi-Ouest France on her plus a couple of other events, but not the Tour Voile [of which the Diam24 is the new official one-design], as we’re launching our new Imoca 60 in March and will be busy putting her through her paces this summer,’ added Armel before admitting in his usual straight-talking manner that ‘It’s good to have such a big milestone to look forward to, it certainly helps me get over the disappointment of the Rhum affair… that has been a tough one.’

If most of us will mainly recall Mr Peyron’s outstanding performance and the great teamwork that made it possible, from Armel’s point of view things are obviously slightly different and leave an aftertaste of a job half-done – not to mention the sheer frustration which is in direct proportion to the man’s immense competitive spirit. ‘It was a stupid domestic accident. I cut myself quite badly, damaging a tendon and a nerve. It required surgery, and straight after the operation the surgeons told me that basically I’d have to get used to the idea that I would not be on the Rhum startline.