This article looks at design and project choices and why they were made in the planning of four Vendée Globe campaigns spanning 15 years of collaboration between one skipper and his designers.

Ecover 3, now rechristened Gamesa, is the third Open 60 that Mike Golding and I have worked on together. We signed the build contract on the first, Team Group 4 (which later became Ecover 1), just weeks after we had both finished skippering boats in the 1996/97 BT Global Challenge. Most people will know that Mike won that event, few will know that my crew were the first to finish with a rookie (first time around) skipper leading them! I was proud of that, but it was already clear to me that I was a better naval architect than sailor. So, having worked with Mike already to help select the designer and builder for his new BOC/Vendée challenger in 1996, before we left on the BT, halfway round in Wellington I knew what I wanted to do next was project manage his solo round-the-world race, for which I was fortunate enough to be involved in the design choices as well as the build process.

This was how one went about winning the Vendée in 1996. Top teams entered one round-the-world race (BOC Challenge/Around Alone) with a new boat, to hopefully then win the Vendée Globe with the same boat. Alain Gautier and Christophe Auguin had shown the way and we were going to buy into the same knowledge base by choosing the same designer and building at the same shipyard. I remember feeling at the time that with Mike’s attention to detail, my Anglo Saxon engineer’s approach and the overwhelming feel for Open 60s that Finot-Conq and JMV brought to the project, the combination would result in something special. Indeed, the result, as Pascal Conq himself said at the time, ‘was our best Open 60 to date’. 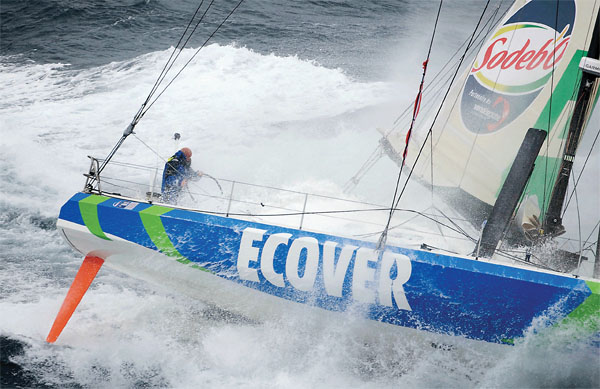