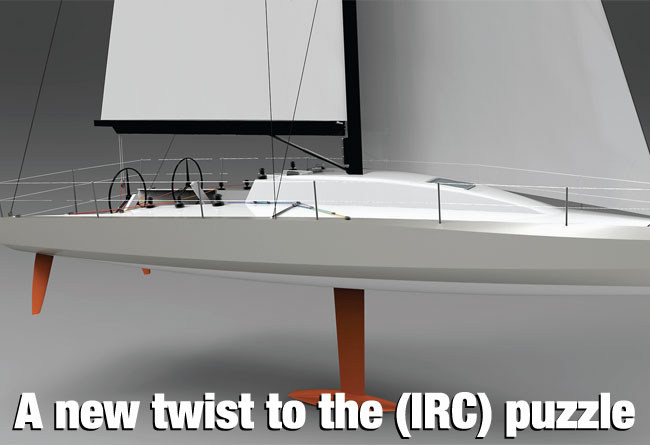 I’m sure some readers will be surprised to find Owen Clarke Design (OCD) delving into the world of IRC. However, they shouldn’t be. Compare the values in the table opposite for the displacement and sail area of the Ker 40, as an example, with those of various generations of Class 40. It’s the latest IRC designs that have steadily increased sail area, reduced displacement and so now come within our sphere of expertise, speciality even.

I doubt if any design office in the UK, at least, has completed more work on highperformance hull shapes and appendages than OCD in the past 12 years. We believe we’ve got something new to offer.

The Ker 40 is an excellent example of a modern design that is very slippery and can now sail to its rating under IRC. However, clearly even the best production-built yacht cannot have an equal edge in all conditions. There must be one range in which it performs best, putting it at a disadvantage against other yachts optimised for local conditions or a particular kind of racing. Hence this latest offering from OCD, for those owners who want something different and also perhaps wish to be involved in the design and build process.

OCD have been approached a number of times in recent years to tender for an IRC racing design. To date we’ve turned down the opportunity for fear of not having enough time to fully develop a competitive design. We wanted our first step into mid-size IRC racing to be a ‘Kingfisher moment’, a new and hopefully winning concept; and to do that we needed time.

Work on this new offshore-biased – but inshore-capable – design finally began in 2011 in response to the demand from several owners who’d previously contacted us about a Class 40. We’ve handled dozens of enquiries just from the UK from potential clients excited by that class, but who understandably are put off by the poor rating of the boats under IRC. Although attracted to the idea of sailing fast with fewer crew, they predominantly want to race in shorter-distance, IRC-rated events.

So clearly good demand existed for a performance-oriented offshore racer… as long as we could strip out those aspects that make a Class 40 rate so badly, while still maintaining as much as possible of the type’s great handling and high performance potential. The question was: would the hull and appendage configurations that we are typically known for be the solution, or would we end up developing a more conventional and perhaps even a single rudder design?

First, we gathered fresh weather data for those areas around the French and British coastlines where the bulk of UK and French IRC competitions take place. We already had a meteo library extending out into Biscay, the Azores and across the Atlantic, as these are the areas for which we are more used to optimising our boats. Since the design would also have to compete in inshore regattas specific information was sourced for the March to November period for well-known venues like the Clyde and the Solent. Our study was also extended to the Caribbean and North America looking at Key West, Lake Michigan and Long Island Sound, since several enquiries came from those waters.

Local variances are important in such a study. For example, we knew from extensive personal experience on the US east coast that while the average wind speed in Newport, RI over the summer is a ‘dismal’ 8kt, offshore at Block Island it’s a full 2kt (25 per cent) higher. Again, in the Solent in August the average wind mid-afternoon is a moderate force 4, at least 2kt more than mid-morning.

Over the racing season the mean wind speed in the middle of the English Channel, south of the Isle of Wight, is more than 3kt greater than in the Solent. The obvious conclusion from such detailed analysis was that we wouldn’t be wasting our time undertaking a similarly detailed study of the regional performance of existing IRC cruiser-racers, plus some of the latest racier designs from the ‘usual suspects’ and comparing them to candidates of our own.

This initial feasibility study entailed developing datum designs from measurements taken in boatyards and from IRC certificates for existing boats. Race modelling using WinVPP and Router reinforced our initial impressions that in northwest Europe, the Great Lakes, the Caribbean, including Key West and some other classic regatta locations, there was likely to be a strong case for a design optimised around higher mean wind speeds – higher than those we perceive some current designs are targeted at. Conservatively we estimated that a target TCC of 1.22 would put us firmly in the ballpark and so we began work on optimising the two best-matching candidates we had developed.

Although this process didn’t set out with people wanting to race the design double-handed, with entries of more than 70 IRC boats in the Royal Southampton YC double-handed series, 60 boats in the AZAB and Round Britain classics and an increasingly popular double-handed division in RORC events we weren’t going to ignore the fact that with water ballast this boat would also suit that type of racing.

The first trial certificate we received from RORC was for an unballasted twinrudder design with an IRC displacement of 5,110kg and a TCC of 1.212, nicely below the target we had set ourselves. The natural progression was to then explore, among several options, the use of water ballast…

The final result is two distinct designs, employing the same hull, but with rigs and keels in different positions relative to the stem, so optimised for different conditions.

The hull and appendages are a development of successful Class 40 designs. Proven high-performance, dynamically stable, both easily driven and capable of being pushed hard in moderate breeze and in waves. For the offshore version the forestay attaches well aft of the stem, evidence of the keel’s position further aft than is the current IRC norm.

The J measurement is also longer than typical and we willingly pay a small rating penalty for that and for the large 188m2 spinnaker, which because of the high righting moment, hull design and twin-rudders, sailors will have no difficulty handling in more wind than they’re typically used to. In performance terms, despite having a TCC that is 55pt lower, on elapsed time both our inshore and offshore designs perform better than any second-generation Class 40 over a range of conditions.

On elapsed time, with a final trial TCC of 1.213, and 1.225 with water ballast, both boats proved competitive when raced in a computer model of the 2012 Round Ireland Race. This event suited our purposes well because it happened at a convenient point in the design cycle, included an Akilaria Class 40 raced with five crew and also featured two of our datum IRC boats: Tonnerre de Breskens and the winner of the actual race on the water, Inis Mor.

Construction will be cost-effective, epoxy-glass foam sandwich for both inshore and offshore versions, designed and engineered to ORC Cat 1. Without prejudging the tender process our expectation is that build costs will be less than or equivalent to a Class 40 and obviously would be driven lower if multiple units are built by one yard. By the time this is read a number of builders around the world will have received comprehensive tender packages including Jaz Marine in South Africa, builder of six of the 14 OCD Class 40s.

Clients for this new IRC design have a choice whether they build overseas, where labour rates can potentially be lower, or closer to home where they can enjoy putting together their own project.

Finally, to answer one more question, particularly for readers in the USA: is this boat designed for the new HPR rule? No, but it doesn’t take too much imagination to look at the numbers, specify construction in carbon, increase the draft, tweak the hull a tad and before you realise it you will be in the zone pretty quickly.