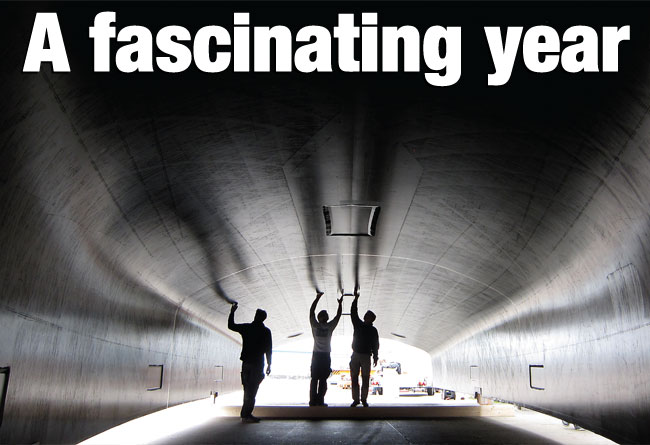 This has been one of the busiest years in the history of our office, even though we were not involved in any new TP52 design, or VO70 or America’s Cup projects. These classes have been our staple focus for the past 10 years, but for very different reasons this activity came to a sudden stop in 2012. TP52 class members are really enjoying their current boats and racing format, and so are putting off major changes for at least another year or so; consequently no new builds were commissioned for this season. Meanwhile, the Volvo Ocean Race has opted for onedesigns and the America’s Cup switched to foiling multihulls. We had the possibility of working for a couple of (real) AC teams, but we decided to stick to our core business of designing fast monohulls… the type of boat that we like to design most.

At the start of 2012 we began work on one of the coolest projects ever for us, a high-tech and stylish 65ft racer-cruiser that will be raced shorthanded in the biggest events worldwide and by a very enthusiastic owner. The original design brief was for a fast boat to be sailed by the owner and friends with only occasional professional crew. The design concept progressively evolved from a fast cruiser-racer to a fullon racer-cruiser… featuring a very powerful hull with plenty of form stability, twin rudders and a deep 4.8m draft lifting keel. The overall righting moment is around 15% higher than on an STP65, without any crew hiking out! The boat has so many automated systems that it can be regarded as a mini superyacht but with rather higher relative performance.

Also involved in the design of the sail and rig package were Mike Sanderson, Richard Bouzaid (Doyle NZ) and Brad Jackson. The boat is being built at Knierim Yachtbau in Kiel, and will launch as this magazine goes on sale. After initial sea trials an all-star crew including fellow Volvo race veterans Stu Bannatyne and Tom Addis will join the team for the 2013 Fastnet Race. The schedule for this year also includes most of the Med offshore races, a Transatlantic crossing and December’s Sydney-Hobart. This is our first ever ‘gentleman’ racer, and we thoroughly enjoyed working closely with a great owner to design his dream boat.

Our next project was a new custom Class40 for Gonzalo Botín. Gonzalo has already won two world championships (2010 and 2012) in this fleet with his Akilaria Mk2 Tales and knew precisely what he wanted for his new boat. His first good decision was to appoint Antonio ‘Talpi’ Piris as project manager and Ximo López of Longitud Cero as builder. Between these two, our own design team and regular engineering partners Pure Engineering, we have created a highly customised Class40, exceptional in terms of weight optimisation and detailing. Many long hours were spent refining critical areas such as the mast/keel bulkhead and the surrounding structure.