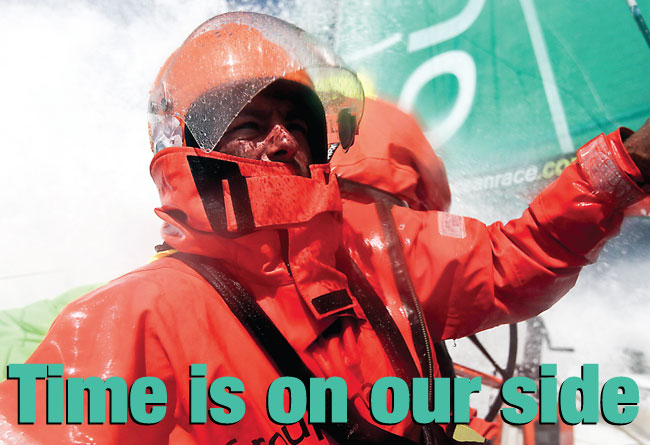 Seahorse: Run us through your pre-event strategy in the last event…

Franck Cammas: The decision to enter the race was made in October 2010, two years before the race start. With the benefit of secure funding, the first steps were simple. We bought the previous winning boat, Ericsson 4, and ordered a new boat to be built by Multiplast and designed by Ericsson designer Juan Kouyoumdjian. For us it was easier to work with a local shipyard that we know well [Multiplast had built Cammas’s giant trimaran Groupama 3].

Meanwhile, at the Groupama base in Lorient we had already been operating with a permanent team for the best part of 13 years, and so we had good experience of building and developing a range of raceboats. As a consequence we had no need to suddenly create a special team for the Volvo Race, we simply had to supplement our resources. We grew quickly from 20 to 60 people, taking on a number of foreign specialists.

It was very important for us to seek out ways to lift our team’s performance since we knew that Juan K was also involved with two other teams (Puma and Telefónica). The added value in performance would have to come from our own efforts as well as from outside analysis. We knew we had the best designer to have a competitive boat, but Groupama would have to be audacious compared to the others.

Primarily that would be all about better optimising the details, but in the end our boat also went to the startline with some quite fundamental differences (from the other Juan K designs) in the keel treatment and in the transom area, where our boat carried more hull volume for better powerreaching performance.

In terms of sailing team, we started with a clear deficit for the simple reason that hardly any of us had sailed a VO70 for any serious length of time! That was a handicap at the beginning of the race; even with some imported additions to our sailing team no one onboard G4 had ever actually won a Volvo Ocean Race before. Compare that to teams like Camper Team New Zealand and Puma! On paper at least we were far from the strongest crew. Actually, we did try to recruit some of the big names of the modern Volvo era, but they did not want to join us, either because they lacked confidence in our team or because we did not pay well enough… So instead we focused on attracting motivated people who actually wanted to sail with us.

The other factor is that outside the Volvo 70 we had less opportunity to sail on other big racing boats than some other teams. The great bulk of our experience was on multihulls. I still remember sailing around the British Isles and thinking that this was our sole real long offshore experience with G4 before the first leg of the Volvo. There was a big gap! But that lack of relevant experience just made me more determined to ensure we had a fast boat.

Another handicap was that the construction of our boat lasted longer than predicted. I am thinking especially about our near-sisterships Puma and Telefónica. They began after us and their boats were in the water before us. Plus there was the risk that, as they started later, Juan K had time to incorporate more of his latest ideas…

One benefit we had was that Groupama had committed to a two-race programme which did give us less pressure. We could be more aggressive in our boat development and take a few risks. But we never once fell into the trap of thinking ‘take it easy, there will be another chance for us’. Nor did we ever feel it would be impossible for us to win at the first attempt. Indeed, from the start of the race we could see that in some conditions – especially in big breeze downwind – we were truly fast, we just lacked Volvo Ocean Race experience.

With a known fast boat it then became our responsibility as sailors to make good choices – not something that we always managed at the beginning of the race. By contrast, Telefónica rapidly started to justify her role as one of the pre-race favourites. The Spanish looked strong from the outset and it seemed hard for us to challenge them. But it happens quite often that the best does not stay the best for ever; once they lost momentum I believe that the cohesion of the Spanish team started to unravel.

Meanwhile, we knew we always had scope to improve, even going into those last few legs. We always thought we can do better and we maintained our fighting spirit. I would say that everything was OK for Telefónica in the first three or four legs. Then they slipped just a little and then their confidence somehow crumbled completely. At the same time we were slowly getting better, we were making fewer mistakes and we were starting to play at the front…

After rounding the Horn we had a good feeling. Then we dismasted, which badly hurt morale – especially following our first win in Auckland. Fortunately losing the rig did not cost too many points because of the general carnage in that leg. And there were still half of the total points of the race left on the board before the finish in Ireland. Arriving in Brazil under jury rig we were suddenly virtually neck and neck with the leaders and were also – at last – getting much better in the in-port races.

Now looking ahead to next year’s race and things will be quite different. Certainly the big effort that with Groupama 4 we put into improving our platform would no longer be relevant. With the arrival of a one-design, there is no longer that huge amount of time and money to be spent in R&D. That is finished. This big switch gives people the opportunity to enter the race later and also allows the race rookies to play better against the ‘old guys’.

This race will certainly be more open. And on the financial side you can forget about two years of expense – effectively that means you can at least halve the budget. Even the sails are one-design now!

Of course you still need time to select the right wardrobe for every leg. But in terms of the sailors you just have to get good guys and make sure they are ready physically, because it will not take them long to learn the Volvo 65. The benefit of a much longer training period will be much reduced. Put another way, an hour spent sailing a one-off custom design is more productive than an hour spent sailing a one-design.

Currently, with Groupama having won the race at its first attempt, my own goal is the next America’s Cup. With that in mind I am spending a lot of time campaigning a Nacra 17; as you know the level is always high in the Olympic classes and I want to become good enough to challenge the best sailors in the world. But for me to be selected for the 2016 Olympics is still going to be a big challenge.

Meanwhile, Team Groupama is also involved in the C-Class worlds (the Little America’s Cup) in England this autumn. I have been sailing a lot on a previous Canadian Cup-winning C-Class which we bought, plus Groupama is developing a new boat, co-designed with an exciting collaboration of experts including Guillaume Verdier, Benjamin Muyl, Martin Fisher and Denis Glehen.

We are entering the C-Class because it revolves around the same fundamental hydro and aerodynamics factors as the AC72 (by the way, expect this year’s crop of C-Class cats to also be fully foiling…) Meanwhile, we are also racing other events like the Tour de France.

And the door is still open…
With respect to next year’s Volvo Ocean Race, that is still a possibility for us. For financial reasons the Groupama group did not want to go again in the Volvo, but other opportunities may come up for us before the end of this year. I think we can wait until the end of March 2014 to enter the 2014 Volvo Ocean Race and still compete at the front.

Remember that our first sail on Groupama 4 was in June 2011, just a few short months before the race start in Alicante.