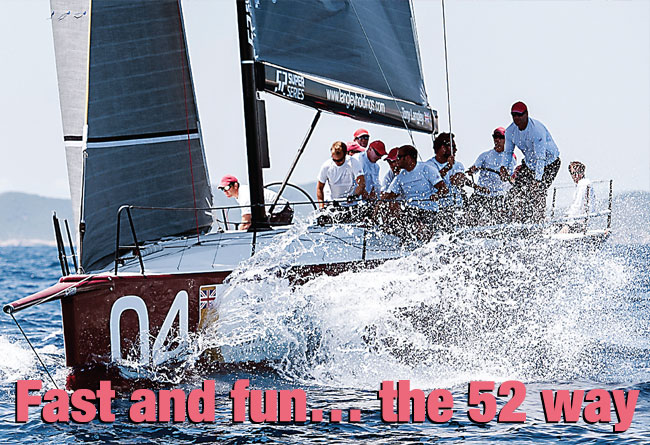 Things are going well for the 52 Super Series and the TP52 Class. Both in Palma (Copa del Rey) and Porto Cervo (Settimana delle Bocche) we have nine boats racing. Five teams from five different countries confirmed during Copa del Rey that they will be building new for 2014 or 2015. I quietly expect we can double this number before racing starts in 2015, but I am not going to put my head on the block about that just yet. Four or five of the existing boats will also still be around in 2015, which would lead to close to 15 boats competing in the 52 Super Series during 2015. Am I dreaming? Time will tell.

Right now it is maximum pressure to get both the 2014 and 2015 TP52 Rule in place; the guys from the Botín design office are pushing us hard to get the rule details they need for the first design built to the 2015 TP52 Rule – for Brazil’s Eduardo de Souza Ramos, twice an Olympic sailor in the Star.

The cunning plan is to build fully to the 2015 Rule but to rein the boat – Phoenix – in a little for 2014 to be on a par with the existing fleet. This will require draft to be reduced by 15cm, adding 200kg of weight and sailing with a rod headstay and 2014 mainsail dimensions. Draft can easily be reduced by sinking the fin 15cm into the bulb and then for 2015 extended again by means of a spacer. Weight is a bit of lead and sails get replaced each year anyway. So in the end the only item that is a real extra cost will be the rod headstay.

Phoenix’s rig will otherwise be built to 2015 spec, so using ultra high-modulus (UHM) carbon and with carbon rigging other than that headstay. This combined with the lower-VCG deck of the 2015 rule will lower the new boat’s VCG and reduce pitching, so for 2014 that will be compensated by ballasting the rig and boat to match the existing fleet. A second boat from the Phoenix moulds is currently being discussed by two interested teams.

The new boat’s 2015-style deck will differ substantially from what we know. Since cockpit volume restrictions are no longer enforced by ISAF, a move that I feel is controversial to say the least, all new designs will move away from the traditional mixture of sidedecks and cockpit to lower VCG and to get more spacious cockpits. The new mini maxi Alegre is a good example of this with her sloping deck/cockpit as you move aft (see issue 401).

I fear that with Alegre we have only seen a first stab at lowering the deck at the expense of interior space, interior comfort and protection from the elements on deck. The absence of a forward cockpit ‘bulkhead’ will not only expose sailors more and reduce interior space but it will also outdate earlier designs as these features are not rated (yet). It may look great but I am not convinced. Anyway, the TP52 class has little choice than to go with what looks to become the trend. You want to be at the forefront of development, as competitive as possible.

However, from 2015 TP52s will have a minimum 2% positive deck camber up to 8.75m from the bow – behind which there will be no restriction on cockpit size except that it must be selfdraining up to 30° of heel.

This 8.75m limit is the only ‘protection’ left from the pre-2015 TP52 rules stopping the whole deck from becoming cockpit or sinking below sheer height, something future one-off designs will be tempted by. It will look great and you can expect more interesting new layouts, but this old man still vividly remembers spending that long pitchblack night of the ’79 Fastnet in the narrow, deep cockpit of an otherwise totally flush deck 3/4 Tonner. Our trench would fill up completely every 15 minutes or so, soaking us to the bone, but at least there was a place to hide from the impact of the waves as they swept our very aerodynamic flush deck…

The Mapfre Copa del Rey was a ball, as always. Both onshore and on the water it remains easily one of the best sailing events in the world. With 11 of our 52s moored in front of the clubhouse and Crown Prince Felipe joining the 52 Aifos for a few days it was a sight that many predicted would not be seen again after our honorary member, HM King Juan Carlos I, stopped sailing.

Let me remind you that in 2008 there were 11 TP52s moored at the very same spot. But this time the combination of Mapfre Copa del Rey and 52 Super Series delivered some extra services to the teams and fans.

As is usual for the Super Series, we had umpiring – but this was a novelty for the Copa del Rey. No more waiting in the long queue outside the Jury Room. And we also had our trusted media/ virtual/live commentary team on the water and onshore. Our official clothing supplier Gaastra Pro surprised us all with a full collection of Super Series/TP52 clothing that is going over the counter from January 2014 in 1,000 shops in seven countries, as well as at our events. And Ergin Imre, owner of Provezza, invited the owners for a great dinner at his castle-style hotel.

And not to be forgotten, it was Quantum Racing first, Rán Racing second, Azzurra third and Rio fourth. The first Copa del Rey win for Quantum Racing… my compliments.

The 52 Super Series is a shoestring act compared with the America’s Cup. But this Mickey Mouse is having a good time with his friends. We reach a lot of owners, sailors and fans in a very positive way.