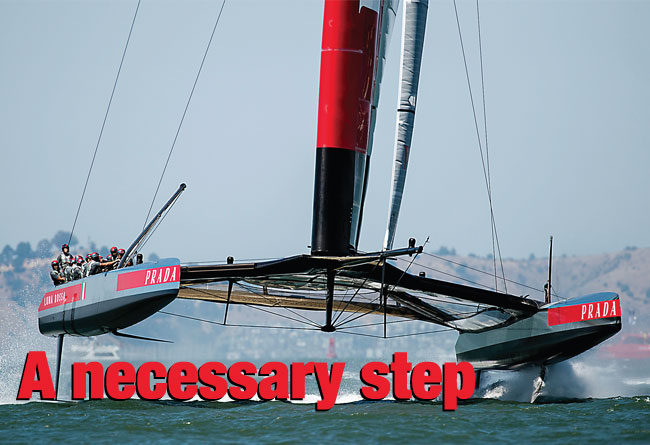 The America’s Cup owes an enormous debt of gratitude to Louis Vuitton. For 30 years the French luxury goods giant has backed the challenger selection series with typical elan and style – often providing racing and drama that eclipsed the main event.

Unforgettable images rise up from the past as reminders of this longstanding involvement: Alan Bond’s debut Louis Vuitton Cup wing-keeled winner breaking the New York YC’s 132-year stranglehold and taking the Auld Mug down under in 1983; the epic 12-Metre battles in the big seas and bright skies of Fremantle in 1987; the dramatic sinking of OneAustralia in San Diego in 1995; the fantastic spinnaker-bursting duel down to the wire between Luna Rossa and AmericaOne in Auckland in 2000.

San Francisco should have – could have – provided a great celebration of this longstanding relationship.

It promised so much. A spectacular new class of giant multihulls; a new format of inshore racing, accessible to shorebound spectators on one of the most dramatic city waterfronts in the world; spellbinding TV; a new breed of sailing athletes; extreme speed; high excitement.

In the end it delivered on some of those things, for sure, but the most important element was missing. We had spectacular sailing – but not spectacular racing. Hopes remained high that we would get that in the Cup Match between the Louis Vuitton champion, Emirates Team New Zealand and Oracle Team USA. But the modern era, with multiple challengers from aroundthe- world racing for right of entry to the America’s Cup, has accustomed us to a veritable festival of sailing taking anything up to five months – something worthy of the ‘Summer of Racing’ slogan adopted for the 2013 regatta.

That is certainly what Larry Ellison envisaged. Outlining his vision of the event he worked so hard to bring to his hometown, Ellison said: ‘First of all it’s going to be a multi-challenger event. The Chinese, the South Africans, the New Zealanders and the French and the Italians and Swedes – all of the teams are coming back… maybe 16 teams.’