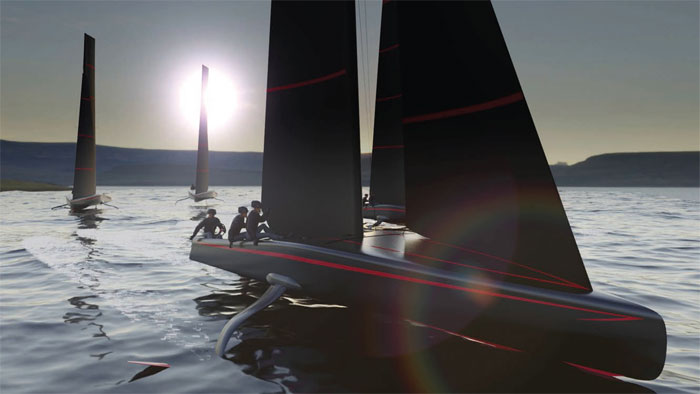 ...when trickledown really is too small a description

The trickle-down effect is supposed to happen slowly but this time its pace is very fast indeed. Just five months after the end of the 36th America’s Cup, Persico Marine launched a fully engineered concept for a 40ft foiling monohull loaded with America’s Cup technology and systems. But the Persico Fly40 isn’t a leading-edge one-off, it’s a one design class for owner-drivers with a fully managed regatta circuit – and the price, and ongoing cost of ownership, is a lot lower than what TP52 owners, for example, are currently paying. It’s a compelling idea and one that Persico is in a uniquely strong position to deliver.

‘We built two boats for Luna Rossa which took a couple of years and we built the one design arms for all the teams,’ says Mark Somerville, general manager at Persico Marine. ‘That’s when the concept was developed. We put in place the technology and tried to capture as much as we could within the AC period to have that trickle-down effect happen as quickly as possible so we can bring this new technology of foiling boats to the public.’

The Fly40 is more than a Luna Rossa spinoff, although their star helmsman Checco Bruni is deeply involved. ‘There aren’t too many people like him that have spent that much time behind the wheel of a boat like this so he is instrumental in every aspect – technically, ergonomically, crew size, whether you drive it with a button or a lever, everything goes through him,’ Somerville says.

The design itself is a collaboration between specialists in this field who work with the Italian and New Zealand Cup teams for the 36th AC. A lot of know-how also comes from Persico’s in-house design office which is staffed by sailors, naval architects and engineers with experience in Imocas, Ultims, Ocean Race boats and almost every other highperformance class you can think of.

Main picture: the Persico Fly40 is a 12-metre foiling monohull concept developed directly from the AC75s and due to go into production before the end of this year. Persico Marine plans to run the class itself as a tightly managed one design racing circuit for owner-drivers with professional crews

To keep costs under control Persico is wisely holding back the production run until a critical mass of orders are confirmed. ‘Let’s face it, these boats are not cheap, they’re high-end technology,’ Somerville says. ‘A normal boat doesn’t have half the equipment that hangs off the bottom. These things and the controlling mechanisms and systems behind them cost a lot of money. We want to do it properly, we want to do it once and do it right. So we will start building when we have four clients signed.’

‘We’ve been working since the beginning with some very interested parties and we expect to have contracts in place so we can start building this year and launch the first four boats next season,’ he says. ‘If we start tooling before Christmas we’ll be able to put four or six boats in the water. Realistically you’re looking at four to five months to build one boat. Obviously if you can build them in parallel it’s a much shorter time frame.’

The expertise that Persico brings to this venture is far broader in scope than the America’s Cup projects they’ve been involved in. The company’s one design manufacturing experience is equally relevant and their record of delivering a whole fleet of Volvo 65s with a weight variance of less than 20kg, as well as their meticulously accurate production of the AC75s’ one design foil arms, should give buyers full confidence that all boats in the Fly40 fleet will indeed be created equal.

Why is it a 40-footer? ‘The bigger it is, the more expensive it is,’ Somerville says. ‘You’ve got to hit a market. A 40-footer gets us everything we need performance wise. We started with a blank sheet of paper and first you’ve got to decide what you want to do with the boat. For us, we want grand prix sailing with owner drivers and pros. We don’t need it to be any bigger than this, we’re going to fly very early and hit high top-end numbers that will more than satisfy the needs and requirements of people who like sailing fast.’

Forty feet also makes sense for transport logistics and helps to control the ongoing cost of ownership. ‘The other side of it, which for me is bigger than the actual boat, is that we at Persico are going to manage and organise the class,’ Somerville explains. ‘Not just the boat itself but also the events. We’ll be holding events around Europe and a 40-footer is a good size for that. We want to put on nice events that are not too far apart and it shouldn’t cost the earth to move boats between them. We need to be able to do it fast and efficiently. It’s a 40ft boat that you can pull apart and fit on a trailer, or you can ship it. It’s quite easy to move around.’ 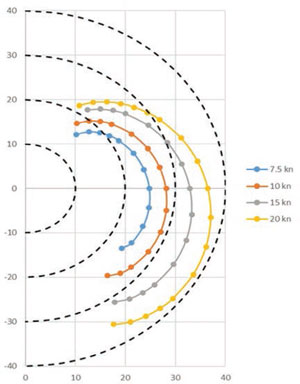 Above and below: the polars released by the Fly40’s designers, Caponnetto & Huber, predict a low take-off speed of just 7kts TWS and exhilarating performance in a wide range of wind conditions. Equally important, however, is that this new boat aims to broaden the appeal of foiling by being relatively easy to sail 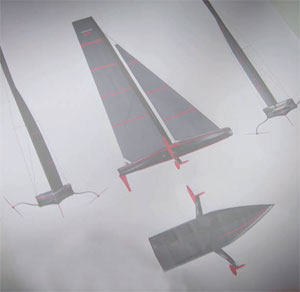 Somerville declines to say whether the foils of the Fly40 will be more like the surface-skimming type used by Luna Rossa or the more deeply immersed ones used by Team New Zealand. But they will, he says, be directly derived from AC75s. ‘The appendages will be what we call a drag and drop copy – which sounds easy but it’s actually not that easy to do – with the same technology of the America’s Cup, so anyone who sails the boat can be pretty confident with what they’re sailing on and what they’re flying on with the same materials, the same concepts and the same build processes from beginning to end.’

‘We’re going to take it further in building the structure for this boat – the hull, deck and internal structures, let’s call it the composite box,’ Somerville says. 'We’re going to build 90 per cent if not more, and laminate all the fibres, with a robot. The engineering will be derivative of the AC75s. We’ve invested in an automatic tape laying (ATL) machine – you do the programming and it laminates all the parts a lot quicker than a human can do it and a lot more accurately, which takes it to another level when it comes to building a one design. We’re using the same technology as the AC but taking it one extra level higher. It means we can build efficiently and produce a number of these boats extremely accurately within a much shorter time frame than we could before. Probably faster and more accurately than anyone else can.’

Owners get to choose their own sailmaker – that’s the only part of the concept that’s not one design. ‘Sailmakers are aware of what’s going on but they haven’t been brought into the loop yet,’ Somerville says.

The onboard systems are again broadly similar to the AC75s. ‘The technology and components, compasses, all the sensors and control systems are all the same,’ he says. ‘The only part that’s fundamentally different is that the AC boats had grinders creating energy and pumping oil to look after the aero package and the canting system for the foil arms was a completely different system driven by a battery pack powering a DC pump which drives the hydraulics and pushes the pistons up and down to control the foil arms. So they had two or three independent systems because of the way the AC rule was written. We don’t have that rule. We’re not going to have grinders on board. We’ll have everything combined in one system with an electric pack, DC pumps, that side of things will be a lot simpler.’

The safety of flight control systems is taken very seriously. ‘The learning from the AC and all the programming that’s gone on there trickles down into this boat to keep everyone safe,’ Somerville says. ‘When we launch these boats we’ll be updating the software straight away to accommodate the owners and the pros and make manoeuvres easier. We can fully automate it if we want, or not. We’ll need to keep everyone happy, keep the sailors doing their job, make it difficult at some point – there’s that playoff there but fundamentally it’s designed to keep everyone safe. Because they’re one design we’ll implement that over all of the boats. We’ll manage it ourselves and keep updating the software like any other component, which is part of the circuit.’

You don’t need pro-levels skills to sail a Fly40, Somerville says. ‘The owner profile we’re looking at is quite broad. The boat will be comfortable and easy to sail. It’s designed to be sailed by four people and we’re specing it for five so you can have someone on board who is not really doing much or they can help out too. Some owners might be a bit reluctant right now due to their age or skill level; we’re hoping we can change that opinion when the boats are in the water and everyone can see them flying around having a lot of fun and it’s relatively simple to do so.’