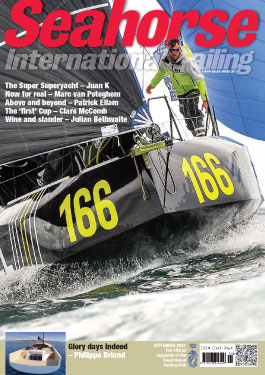 It’s only rock and roll
Seventeen TP52s are lining up in Puerto Portals which is one hell of a way to say ‘We’re back!’ ROB WEILAND

They’re all at it
A lot of people have spent a lot of time and money investigating the bigger potential of the solid wing rig. VPLP have to be at the forefront of the pack. MARC VAN PETEGHEM AND PATRICE CARPENTIER

The right stuff
A remarkable story of some remarkable people. DAVID MUNGE looks at the creation of the Junior Offshore Group and shares a little about its remarkable co-founder PATRICK ELLAM

Letting the side down
The first Admiral’s Cup was not raced for in 1957… far from it. CLARE MCCOMB continues her story of the north-south rivalry that drove a lot of the early development in British yachting

Keeping the bastards honest
JULIAN BETHWAITE’S least and most favourite subject is sailmaker selection. But it’s easy to see why the topic is such a confusing itch to scratch

Chasing the Blue Riband
The new ClubSwan125 Skorpios is the biggest monohull entry in this year’s Fastnet Race and by some way the biggest ClubSwan yet. JUAN K and ENRICO CHIEFFI explain the thinking behind it

A good area to delegate!

A most robust pedigree

The same (but different)

Competition does its job

Update
There’s never been anything else like Reliance, there should have been more like Tippy, the Bella gets going, an astonishing volume of work from the northern neighbours and the Class40 Scows continue to firm up their dominance… Although the ‘hybrid’ did OK too. PETE BURLING, MIKE SANDERSON, JACK GRIFFIN, TERRY HUTCHINSON, PATRICE CARPENTIER, CLARE MCCOMB AND ADRIAN MORGAN

Paul Cayard – Time for the hard yards
Looking forward to the Tokyo Games, yes, but what comes after will be much more significant

IMA – Finally
Not even the most majestic of fleets was beyond reach of the pandemic, but like the TP52s it’s time to get back on the water. ANDREW MCIRVINE

Sailor of the Month
Two champions of just pretty much everything