So far so good... but a long way still to go 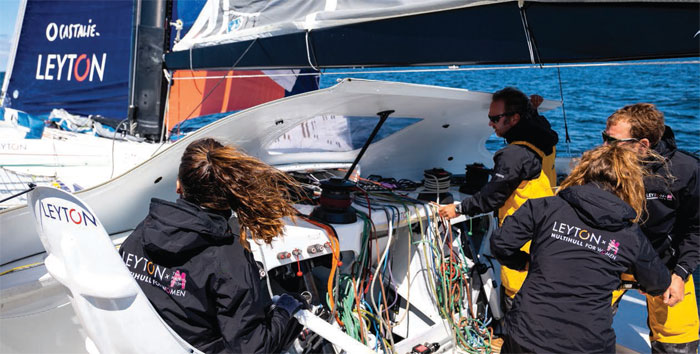 Women in sailing have notched up some fine milestones but much work remains and the Magenta Project has set some key ambitions to achieve greater equality, particularly at the performance end of the sport

Established by the sailors of Team SCA in the Volvo Ocean Race 2014-15, The Magenta Project is a collective of passionate, world-class sailors and sailing advocates, female and male, committed to creating equal access and opportunities for women in sailing. Alongside their Magenta Mentoring Programme, the project also partners with teams and events to upskill female sailors and help accelerate women to the top of the sport.

Team SCA and its all-female crew skippered by Sam Davies finished sixth overall in the Volvo Ocean Race and won the leg from Lisbon to Lorient. In the In-Port Series, the team finished third overall, winning a hat-trick of races while Team SCA navigator Libby Greenhalgh won the B&G Navigator prize, voted for by her fellow race navigators.

While Team SCA broke new ground in 2014, some 26 years earlier Tracy Edwards skippered Maiden with the first ever all-female crew in the history of The Whitbread Round the World Yacht Race. Other eminent female sailors have peppered the record books over the years including Dame Ellen MacArthur, Dawn Riley, Shirley Robertson, Dee Caffari, Dame Naomi James, and Isabelle Autissier to name a few. But these and other stand-out female performances have had little impact on the culture and inclusivity of the sport.

This despite the fact that sailing is one of those special sports where men and women are able to compete alongside and against each other, leveraging the very best of mixed skilled teams. These are skills that are reflected in the workplace, except that the opportunity given to women is as staggeringly low in the corporate world as it is in the sailing world.

With the leaps and bounds in innovations and design, this should not be the case in 2021. To ensure sailing is not left behind, the time is right, culturally and economically, to capitalise on the existing momentum within the sport and drive for greater inclusivity at all levels.

In the workplace diversity and inclusion are increasingly becoming a decisive factor in employer selection amongst talented, younger employees and crucially by investors and shareholders. Gender diversity is a focal point, with the stock market rewarding greater gender balance and returning a lower volatility of shares.

In the Financial Times, Goldman Sachs reports that, based on data for the Stoxx 600 companies since the 2008 financial crisis, listed European companies that have more women at senior levels have benefited from stronger share-price performance. Companies in the top quartile of their sectors based on the share of women on the board or female managers saw their share price out-perform by an average of 2.5 per cent compared to companies in the bottom quartile.

Harvard Business Review substantiated this research with three key observations as to why firms with women in more senior positions are more profitable, socially responsible and more stable and how this then influences how firms think. First, firms become more open to change and less open to risk (ie move away from tradition); secondly, firms shifted from M&A to R&D (ie move towards innovation), and finally the impact of female appointments in general was greater when women were well-integrated into the top management team.

In short, diversity of gender and culture breeds diversity of thought; greater creativity and attracts greater talent. And yet in the sports industry such comparisons are still a novelty and reporting on the success of female leadership is minimal. A 2017 study by the European Parliament showed that there are still significant differences in the media coverage of women's and men's sports. Research shows that sports journalism in the print media is a man's world, with over 90 per cent of articles written by male journalists and more than 85 per cent of the coverage dedicated to male athletes.

In the sailing industry, anecdotally it is evident that there are far fewer women in the sport than men. The World Sailing Trust’s Strategic Review at the end of 2019 substantiated this general feeling through an international survey, inviting men and women from across the sport to share their views.

The survey received over 4,500 responses from 75 countries, from people aged 11-83 and with roles and experience across the sport, from different classes, inshore and offshore, representatives from national authorities and class associations, as well as race officials, umpires and event organisers.

The review also undertook nearly 40 1:1 interviews and looked to other international sports to learn from colleagues and peers in badminton, golf, cycling, rowing, rugby league and union and football.

The results of the survey produced a fairly damning indictment of the sport, highlighting that very little, if anything, had happened to move to greater equality and equity since Tracey Edwards’ Maiden threw out the rulebook in 1989. The survey revealed that 80 per cent of women and 56 per cent of men believe that gender balance is an issue in sailing. This belief intensifies with age and exists across the world – there were no real geographical variations. Respondents shared several key trends: issues around a lack of female participation causing and demonstrating discrimination; a lack of support for women and girls; lack of representation; poor perceptions about women in sailing and issues around the politics of racing. 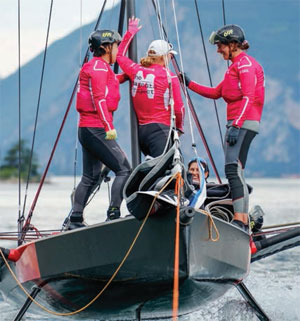 Above: the 69F Magenta Project Foiling Camp on Lake Garda in June 2021 gave eight women from eight countries the opportunity to fully immerse themselves in top-level inshore race training.
Photo: KEVIN RIO
Below: the Magenta Project gives talented women sea time on grand prix race boats. This is Annika Möslein (GER), a 2018-19 Magenta Project mentee, helming the VO65 Scallywag on a delivery trip after the 2017-18 Volvo Ocean Race, which included coaching from VOR sailor Sara Hastreiter. As an engineer, Annika was also keen to learn about all the various systems onboard.
Photo: VOLVO OCEAN RACE 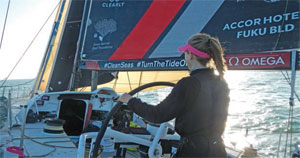 Respondents also shared their experiences of discrimination: 59 per cent of female respondents and 14 per cent of men say they have experienced discrimination. There were experiences of isolation and harassment shared, being treated as less competent and experiencing slights on board, a lack of opportunities for women and girls, being stereotyped by gender and receiving less support than male counterparts. This research formed a base in which to develop a series of recommendations and initiatives to start to fully address the issue of gender balance in sailing.

So, while sailing is cognisant of its need to change and, indeed, greater equity can be seen at the grass roots of the sport, there is a huge abyss at the top of the sport, in particular performance sailing. This is to the detriment of the sport, for two specific reasons. First, brand equity and sponsorship. Increasingly, firms are no longer willing to invest large sums in sponsorship and associate themselves with sports that are not aligned to their own purpose nor reflective of the world market. This means increasingly, sailing will struggle to compete on attracting funding against more advanced-thinking sports, for example tennis. And second, attracting and retaining talent. In a similar way to attracting sailors from different countries to form the best team, expanding the team via gender diversification simply means increasing the talent pool. Each role on the boat requires different skills, some of which are physical, some of which are mental; some of which are creative; some of which are strategic. These roles are not gender-specific, so limiting them to just men – or indeed just white, middle-aged men – dramatically reduces the ability to attract those at the top of their game.

The question is what we can all do about current gender inequity, to ensure sailing is appreciated for its mixed-skill brilliance by a wider audience. The Magenta Project is keen to work with clubs, teams, and organisations to help work on a series of ideas that could permeate all levels of our sport. These ideas include a series of simple initiatives including:

World Sailing’s recent focus on women in sailing through their Steering the Course programme provides a welcome focal point and has helped to highlight initiatives that are already in place across the sport. The Magenta Project has started working with several different organisations including Leyton Sailing Team, The Ocean Race, US SailGP Team, 69F Class and Foiling Week to name a few.

But what is crystal clear is that levelling the playing field for women and girls and increasing their participation in sailing so that it becomes a fit-for-future sport, will require all of us to make the changes we can.

Click here for more information on The Magenta Project »