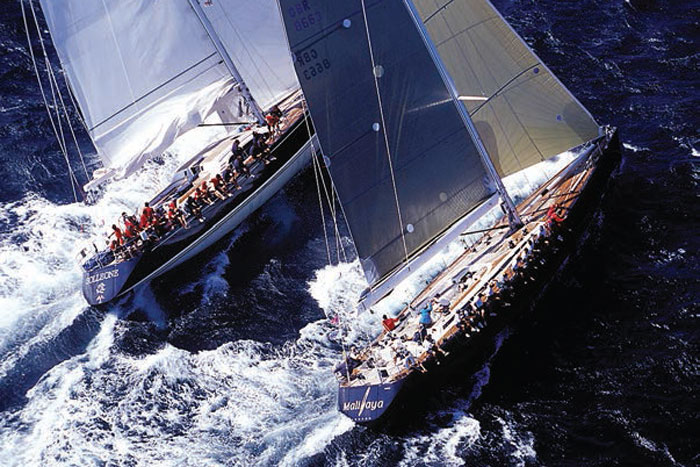 The Maxi world is at last having a chance to return to some more normal life. Despite the major disturbances caused by the pandemic yacht clubs and owners have gone to great lengths to manage events in a Covid-secure manner. Nevertheless, we yet again had to cancel our joint Transatlantic Race even though it was pushed back to January. With luck next year it will happen and as well as RORC we have taken on the Yacht Club de France as another club promoting this venture.

The whole Caribbean season was also lost so we have yet to be able to start our new IMA series there. Again we hope that in 2022 the three events making up our new series will go ahead normally – the Heineken St Maarten Regatta, Les Voiles de St Barth and the largest and oldest Caribbean event, Antigua Sailing Week. They have all been popular with Maxis in the past and we are sure will be again.

Our usual European opener, the Palma Vela regatta in Palma, has been postponed until October, so it was down to the Yacht Club Italiano to start the Mediterranean season with the renaissance of their spring regatta in Portofino, the Regate di Primavera – Splendido Mare Cup. Unfortunately, yet again due to public health restrictions, even this event had to be moved on a week causing an unfortunate clash with the well-established Rolex Capri Sailing Week – in the end both events went off successfully although with inevitably reduced numbers due to the continuing travel restrictions.

Fortunately offshore races have been easier to run so far this year, without as many restrictions as the inshore events. For that reason the clubs organising the Rolex Giraglia cancelled the usual Saint-Tropez inshore series and only ran the offshore stage from San Remo via turning marks off the French coast but with no onshore activity in France. The 151 Miglia also had to cancel their usual before and after parties in Marina di Pisa and Punta Ala. Despite this there were encouragingly large entries for both events.

Main picture: Confidence is high and before too long we will be receiving a steady flow of bang up to date Maxi racing shots like this one of Andy Soriano (bravely) setting his Swan 80 Maligaya up to weather of Leonardo Ferragamo’s much larger Swan 115 Solleone in Sardinia just two years ago (Soriano won the 2014 Maxi Worlds with his Mills-designed racer Alegre). Last year, with the fleet all ready to go and the first race of the 2020 Maxi Worlds two days away, the regatta was cancelled following a sudden outbreak of ‘it’ within the Yacht Club Costa Smeralda. Not this year, ball fans… not this year (fingers crossed)

Owners and crews are desperately keen to get out sailing again. And fortunately being out on the water in wind is one of the least likely places to intercept the virus.

Our plans for the rest of the season remain as firm as possible though no one can be really secure yet. An example is the almost daily changing of rules on both sides of the English Channel making life very difficult for all involved in planning the start and finish of the Rolex Fastnet Race, organisers and competitors alike.

We look forward to the Palermo-Montecarlo Race in August as the last event in our IMA Mediterranean Offshore Series. We then go on to the main event, the Maxi Yacht Rolex Cup, where we already have a very high-quality entry list. Although the Maxi72 class as a box rule has ceased to exist nearly all the boats that were built to the rule will be there in various modified configurations – one having even converted to powered winches.

Fortunately there are still owners with the confidence to build new Maxis. Of particular interest is one of the largest racing monohulls yet built, the new ClubSwan 125 Skorpios. She is billed to do the Fastnet and Rolex Middle Sea Race. The new very beautiful Spirit 111 Geist is also planning to appear, as is the new Deep Blue. In build too are at least one new ClubSwan 80, a new Wally 100 and, most revolutionary, a flying Maxi using similar lifting rotating wingfoils to the latest America’s Cup 75s.

Further developments we are now looking at are Maxi multihulls. As well as well-known trimarans such as the MOD 70s and Ultims there is a new generation of fast racer-cruiser catamarans, some of whom successfully raced in the recent Loro Piana Regatta in Porto Cervo. We are also looking at changes for rating and scoring our monohull fleet. We have extended our trial of reduced crew numbers now to two bands, 70 per cent and 50 per cent, with appropriate rating allowance calculated independently by the IRC rating office. The 50 per cent band is really to help with social distancing but the 70 per cent band will continue.

We also hope to try to have some larger fleet starts on at least one day of the Porto Cervo Regatta rather than the multiple smaller class starts that are the usual pattern; some variety is necessary to keep and stimulate further interest in these events. However, it is important to manage this carefully without too much change which can cause upset; evolution rather than revolution.

We also plan a new race to make the trip back from Porto Cervo going north more interesting. This event is a joint venture between Yacht Club Costa Smeralda, Yacht Club Monaco and the IMA. The Maxis will start together and sail for 24 hours towards Monaco and then take their position. The distance sailed will be corrected according to rating to give the winner. The slower boats will be able to motor after the 24 hours with the aim of getting all the competitors into Monaco in time to enjoy a prizegiving at the YCM. As I said, variety is key.

There are two further new offshore events in the Med this year which we hope will prove attractive enough to Maxis to be adopted as part of the IMA series. The first has just completed the inaugural edition, the Aegean 600, won by IMA member Carlo Puri Negri’s Atalanta II, also the previous winner of our Med Offshore Challenge series.

The second is an ambitious joint project set up by the Yacht Club Italiano in Genoa and the Società Velicadi de Barcola e Grignano in Trieste. This race will sail right around Italy from Genoa to Trieste, passing through the Strait of Messina to round the southernmost point of the Italian peninsula and then up the full length of the Adriatic. The start is on 12 Sept - ember with the plan for boats to reach Trieste in time to compete in the famous Barcolana on 10 October. It should also attract a few more Maxis for the Venice Hospitality Challenge the following weekend. It is encouraging to see these new longer races, very much suited to Maxis, when only a few years ago it seemed that all the attention was on inshore day racing.

On a final sad note we were very sad to hear of the passing of our longtime vice-president, Sir Peter Harrison. His lovely ketch Sojana graced so many Maxi regattas all over the world. She was that increasingly rare beast, a Maxi that is very successful for both racing and cruising. His loyal crew will miss both him, and her, immensely. Peter gave countless young sailors support over the years, many of whom are now top-flight professionals.
Andrew McIrvine, IMA secretary general