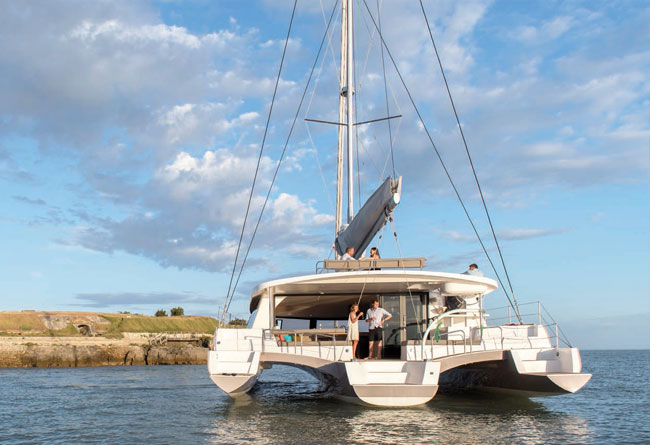 Neel’s fast ocean going trimarans are becoming an increasingly familiar sight around the great cruising destinations and with good reason... not all of them immediately obvious

How do you judge the success of an ocean cruising yacht? You can tell a lot from where you see them and where you don’t. It’s also instructive to look at the builder’s order book. If you buy one now, how long will you have to wait for delivery? Another indicator is how well (or poorly) they hold their value on the secondhand market. By any of these measures, Neel Trimarans is absolutely nailing it.

You’ll often see Neel tris anchored in remote parts of the Hebrides and far-flung atolls of the South Pacific but they’re rarely seen in crowded, mainstream cruising destinations like the Ionian, the Virgin Islands or the Solent. Depending on which model of Neel tri you want, you’ll probably have to wait at least eight months and possibly up to two years. And a survey of brokerage websites suggests that there isn’t a great deal of difference between the asking price of a two-year-old Neel and the cost of a new one.

Despite the disruptions of the Covid pandemic, the La Rochellebased shipyard is still steadily growing. ‘We built about 30 boats last year,’ says Neel founder Eric Bruneel, ‘and this year we expect to build 45 to 50.’ The latest, smallest model, the Neel 43, is coming off the production line at a rate of one boat every two weeks and demand is still outstripping supply.

That said, due to the shipyard’s recently increased capacity, now is a good time to order a new Neel as the waiting list, at the time of writing, is shorter than it’s been in years.

Main picture: the super-wide platform of a Neel tri gives you considerably more living space at anchor than even a cat of similar length. The central hull improves weight distribution, allowing all heavy equipment and systems to be low down and centrally located.
Below: Neel’s new Leen power tris have the same core values – and designer Bernard Nivelt owns one...

One good reason for Neel’s strong appeal to experienced ocean sailors is that these boats sit right in the middle of the multihull performance spectrum – and most others don’t. The vast majority of multihull brands are focused on short-range cruising and their boats are designed with charter use in mind, competing against their peers to offer the most luxurious modcons and largest interior volumes, which inevitably makes them a lot heavier than they need to be and encourages design features that impair their sailing performance. At the other end of the scale, highperformance multihulls are great fun but generally unsuitable – and unsafe in inexperienced hands – for allweather offshore cruising, especially with a young family on board.

Neel is one of just a few brands that have carefully positioned themselves between these two extremes. ‘Where other multihulls have to choose between performance and comfort, a Neel combines both,’ says Charline Picon, an Olympic gold medallist the the RS-X class, who knows a thing or two about performance and is Godmother of the Neel 51. ‘We’re definitely performance-oriented but it’s absolutely not about racing,’ says Eric Bruneel, pointing out that while his yachts have performed very well indeed in ocean passage events like the ARC and ARC+, these are competitive cruising rallies rather than races.

Bruneel has a strong personal racing pedigree, having won his class in the 2004 OSTAR and 2005 Fastnet aboard the 50ft Trilogic, which he built himself, plus a second place in the 2006 Route du Rhum and various exploits in bleeding-edge C Class cats. He also has a lifetime of experience at the forefront of multihull production with 27 years at Fountaine-Pajot, including 10 years as managing director, before he left to found his own shipyard. In the decade since the first Neel trimaran sailed out of La Rochelle’s historic harbour, his boats have earned widespread respect among experienced ocean sailors.

So why choose a tri? There are several reasons why three hulls are better than two, especially if you’re sailing offshore. First and foremost: weight distribution, which is far more important in a multihull than a monohull. The central hull of a trimaran is the ideal place to put all the heavy stuff, Bruneel explains, and having a single engine amidships is much better for stability than twin engines at the aft ends of two hulls. ‘It changes everything, all the dynamics – like a skater in a spin, moving her arms in and out to control her speed,’ he says. ‘Catamarans have to carry weight in all four corners and that’s why the motion of a trimaran is better, much softer, at sea.’ The pitching motion is less pronounced when sailing closehauled and on a beam reach there’s less of a tendency for the boat to rock back and forth from hull to hull.

Another advantage is better performance in light airs, Bruneel says, which directly translates to more enjoyment for the owner and crew. The combined wetted surface of a trimaran’s main hull and one float is smaller than the wetted area of a cat with both of its hulls still immersed, and the trimaran is designed to sail with a small amount of heel, rather than bolt upright, which helps the sails hold their shape in very light winds. Also, a single rudder with a simple direct linkage gives a better ‘feel’ to the helm than a twin-rudder setup, particularly upwind, and saves weight in the stern where it has a significant effect on the boat’s fore-and- aft pitching motion.

Living space is also a key consideration. The performance of most cruising cats is constrained by the requirement to have double island beds fitted inside the hulls, whereas the wider platform of a trimaran allows the bridgedeck accommodation to include a spacious double owner’s cabin as well as a large saloon. Other guests onboard have to make do with narrower berths in the slender floats but it’s a configuration that works well for a family living aboard longterm, or for a group of friends doing a passage race or cruising rally.

Above: the front end of a Neel 65’s bridgedeck has two separate lounge seating areas, either side of the yacht’s main nav station.
Below: Neel’s ‘cockloon’, an original concept by Michel Joubert, turns the saloon and cockpit into a single indoor/outdoor space.
Bottom: one of the Neel tris’ most useful characteristics is the ability to sail deeper angles downwind than most multihulls 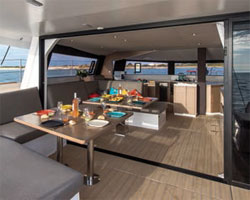 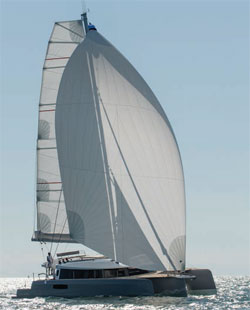 The striking, distinctive look of Neel Trimarans has evolved gradually over the last 10 years of production. Under the skin, however, Neel’s design DNA was developed, refined and thoroughly proven offshore long before any of the models in the current range – the 43, 47, 51 and 65 – were launched. It’s a seagoing philosophy strongly informed by Bruneel’s own ocean sailing experience and developed in close collaboration with his longtime design partners, Bernard Nivelt and Michel Joubert. When Marc Lombard took over design duties for the range after Joubert’s death, the design brief he received was simply to carry on in exactly the same direction. ‘Nothing has changed except the name of the designer,’ Bruneel says. Nivelt, meanwhile, has been busy designing a range of remarkably fuel-efficient trimaran motor yachts under Neel’s newly launched Leen Yachts brand name, with the same parameters and long-distance cruising capability as the well-proven sailing tris.

The essential ingredients of the Neel design recipe include performance heritage from Bruneel’s Trilogic racer (a Joubert design), and sea-kindly design parameters like a high bridgedeck clearance to minimise slamming in waves, and a significantly shorter-than-average bridgedeck length to keep the boats’ weight centred. The interior design philosophy is to have as much of the accommodation as possible on the bridgedeck level and as little as possible down below, allowing the boats’ underwater shape to be optimised for seagoing performance and handling rather than compromised by the interior fit-out. Michel Joubert’s “cockloon” concept, which treats the cockpit and saloon as a single inside/outside space, has been copied by almost every other multihull brand in the market.

Other key features include a cutter-rigged mast stepped amidships (long before it became fashionable to bring the mast step aft) with a big genoa and a working jib with a much lower centre of effort than the part-furled genoa of a sloop-rigged yacht; plenty of lateral resistance to ensure good upwind VMG – equivalent to a monohull racer-cruiser of similar length in almost any conditions – without needing a daggerboard; and the ability to sail efficiently downwind at deeper angles than most other cruising multihulls can manage, which is a distinct advantage for trade wind sailing.

Exotic materials are used only sparingly in the boats’ construction, for good reason. ‘We use unidirectional carbon only in crucial places like the beams and deck,’ Bruneel explains. ‘For long-distance cruising you don’t want carbon in the hulls because even a small hit can do a lot of damage to the boat, and we don’t need it because our boats are light enough without it.’ A carbon rig with square-top mainsail is available, which gives better performance than the standard alloy rig in light airs, but Bruneel says that in most conditions there isn’t much difference between the two rigs.

Almost all part of the boats, even the interiors, are vacuum-infused GRP foam sandwich using materials that can easily be recycled when the boat eventually reaches the end of its life. Social aspects of sustainability are taken equally seriously and the gender pay gap within the shipyard is actually tilted in favour of female employees. Environmental concerns are paramount even in the new range of Leen motor yachts. ‘I couldn’t ignore that even if I wanted to,’ Bruneel says. ‘My design engineers would simply refuse to produce a dirty boat.’