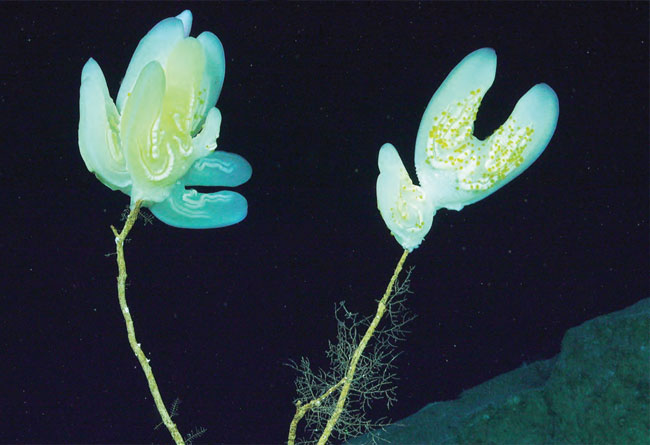 We know more about the Moon and Mars than we do about the deep ocean... but we know enough to do a better job of looking after it

The spirit and values of ocean racing – leadership, resilience, tenacity and collaboration – are exactly what’s needed to address the health of our oceans. The deep ocean might seem to divide us but beneath the surface, it’s actually what connects us to each other across continents and to the complex web of ecosystems that sustain and support all life on this planet. In this era of massive, manmade environmental impact we don’t seem to know what is at stake. Now is the time to find out and take action.

That was the take-away message from the third edition of The Ocean Race Summits, broadcast online from Newport, Rhode Island, U.S. and sponsored by 11th Hour Racing, where some of the world’s leading sailors, scientists and changemakers discussed the urgent need for greater global interest, engagement and investment in the field of ocean science and exploration.

While the need to act is urgent, the situation is far from hopeless. In fact, as the oceanographer Philippe Cousteau explained during the Summit, we already have most of the technology we need to transition to a sustainable future. We just need the collective willpower and resolve to make it happen.

We know more about the Moon and Mars than we do about the oceans of our own planet. Although we’ve been exploring the oceans for thousands of years, more than 80 per cent of them are still unmapped, unobserved and unexplored. Many scientists reckon that the true figure is more like 95 per cent unexplored, and point out that almost everything we do know about the ocean is in the shallows. We know very little about what lies beneath and quite wrongly assume that beyond the Continental Shelf is merely an empty abyss. In fact, it’s the largest ecosystem on earth and contributes significantly to supporting human life, in ways we are only starting to understand.

Main picture: beyond the continental shelf is a vast deep ocean ecosystem full of surprises like these harp ctenophores (a type of comb jellyfish) spotted in the Coral Sea Marine Park at a depth of 385 metres
Below: the Schmidt Ocean Institute ROV SuBastian is a unique and invaluable tool for scientists around the world who work at the cutting edge of deep ocean research 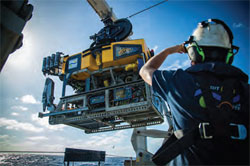 Some compelling evidence of how much we still have to learn about the deep ocean was presented at The Ocean Race Summit by Dr Carlie Wiener of the Schmidt Ocean Institute. To the amazement of most attending the summit, Dr Wiener revealed that the longest known sea creature – a giant siphonophore nearly twice the length of a blue whale – was only discovered in 2020. If something of that size has eluded us for so long, what else might we have missed?

Schmidt Ocean is at the forefront of deep-ocean exploration. A sibling organisation to 11th Hour Racing, Schmidt Ocean hosts scientists from around the world aboard its research vessel, Falkor, providing state-of-theart operational, technological and informational support for pioneering projects at sea. The equipment aboard Falkor includes a unique, high-performance computing system for fast processing of data, and a 4,500-metre capable remotely operated vehicle (ROV) SuBastian.

‘Almost every expedition leads to important discoveries,’ Dr Wiener says. ‘We’ve discovered the longest ocean animal, new fields of hydrothermal vents, and 14 major undersea features like seamounts, reefs and canyons. This year alone we have discovered more than 50 new species, mapped more than 78,000 square kilometres of sea floor; and made some really important observations.’ Ocean science is relevant to everyone, she explains. It’s not just about studying ecosystems and finding new species; it also has practical benefits.

For example, ocean research has identified unique chemical compounds with the potential to cure diseases. Deep-sea corals are time capsules with crucial evidence that helps us understand long-term phenomena like climate change. Ocean science also provides the data that allows us to predict earthquakes and tsunamis. And while commercial ocean exploration focuses on finding new sources of food, minerals and fuel, Schmidt Ocean’s frontier science is a vital counterbalance, helping to safeguard our future by establishing a baseline for the deep sea to understand what animals are found there and how they use these fragile systems.

With a major international initiative starting this year – the UN Decade of Ocean Science for Sustainable Development, which aims to promote ocean science in the context of global ocean conservation for the next generation – Schmidt Ocean’s work is set to become even more relevant. Falkor has already mapped more than a million square kilometres of sea floor and is now tasked with doubling that. Schmidt Ocean’s data and imagery also contributes to the global mapping effort established by the Nippon Foundation, and the 30 x 30 campaign, which calls for at least 30 per cent of the oceans to be protected from mining and fishing, by 2030. ‘Our aim is to support these initiatives with our science and help policymakers to understand what’s there,’ Dr Wiener says.

Schmidt Ocean is also working hard to raise public awareness. ‘My goal is to interest people who don’t think or know about the deep sea,’ Dr Wiener says. ‘It’s important precisely because it isn’t in people’s purview.’ To help spread the message, Schmidt Ocean has an artist in residence programme. More than 30 artists, sculptors and musicians have already joined Falkor’s expeditions, helping to tell the story in ways that transcend language and cultural boundaries, with a reach that goes far beyond the scientific community.

What role can sailors play in this ambitious new wave of ocean science? 11th Hour Racing Team supports it by inspiring people to find out more about the ocean. The team’s current focus is a four-year campaign to win The Ocean Race, which starts in 2022. This involves designing, building and racing a next-generation Imoca 60 while actively advocating for ocean health, running an international outreach programme, influencing marine industry supply chains, and putting sustainability at the heart of all of the team’s operations on land and sea.

It’s a complex undertaking that requires a dedicated sustainability team led by Damian Foxall, a hugely experienced professional offshore racer himself. ‘I feel lucky that this job allows me to step outside the sailing world and meet people who are working at the cutting edge of ocean science,’ he says.

While a large part of Foxall’s time is spent on things like hi-tech boatbuilding innovation and life cycle assessment of Imoca parts – more about that in a forthcoming article – he also facilitates legacy grants that fund ocean science projects. In addition, he manages an outreach programme that brings the team’s sailors together with scientists, helping the sailors to be effective advocates for key ocean health issues such as marine protected areas, acidification, biodiversity and plastics pollution before, during and after the race. There is evidence that environmental advocacy at The Ocean Race stopovers has prompted real action, Foxall says, such as New Zealand joining the Clean Seas pledge and a plastic-free campaign at V&A Waterfront in Cape Town, South Africa.

Above: Schmidt Ocean used multi-beam mapping to discover this 500m tall detached reef in the Great Barrier Reef – the first reef found there in 120 years
Below: Schmidt Ocean also discovered new fields of hydrothermal vents that drive entire ecosystems of microbes and animals. 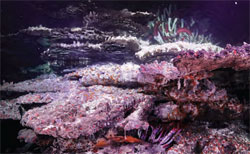 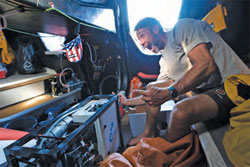 Most of the team’s legacy grants will be awarded at The Ocean Race stopovers but several are already under way in France, where their new boat is in build. These include support for education programmes at Station Marine Concarneau, the world’s oldest marine research facility, and Explore, a marine science educator and ideas incubator co-founded by the ocean sailor Roland Jourdain.

On a practical level, The Ocean Race boats and crews aren’t just raising awareness of ocean science. They’re also conducting it. As Wendy Schmidt, the co-founder of 11th Hour Racing and Schmidt Ocean Institute explained to attendees at The Ocean Race Summit, the entire fleet is involved in an important and unique science initiative. ‘The teams will continue to collect data from ocean waters never measured before in any way,’ she says. ‘And that’s important. Our knowledge today of sea surface temperature relies on a single measurement point derived from an area twice the size of Portugal. The observations made from our boats tracking across the globe supply a missing link for scientists, helping build on their model of the ocean as a whole system and enabling them to measure the scale of changes occurring as a result of human impact.’

And the scope of this work is now set to expand. ‘Measurements taken from The Ocean Race boats will provide scientists with baseline information not only on sea surface temperature but also salinity, acidity, dissolved carbon dioxide and microplastic pollution,’ Schmidt says.

‘Our boats will also supply realtime weather measurements that will help validate and improve weather forecasting systems. Not to mention the extraordinary life our sailors may report about at sea, or the larger plastic pollution they may encounter. There’s a phenomenon experienced by astronauts while in space flight that’s known as the overview effect. It’s a cognitive shift in perception that happens when the earth is first witnessed in its reality, hanging alone in the void of space, wrapped in a paper-thin protective atmosphere, seen suddenly as something rather fragile. At 11th Hour Racing we’re working with The Ocean Race to create an overview effect for the ocean, reaching audiences around the world online, at ocean summits and exploration zones at stopover cities, and changing their perceptions. Together we have a unique opportunity to join the sport we love with the science we need for the ocean.’

You can watch The Ocean Race Summit online here »