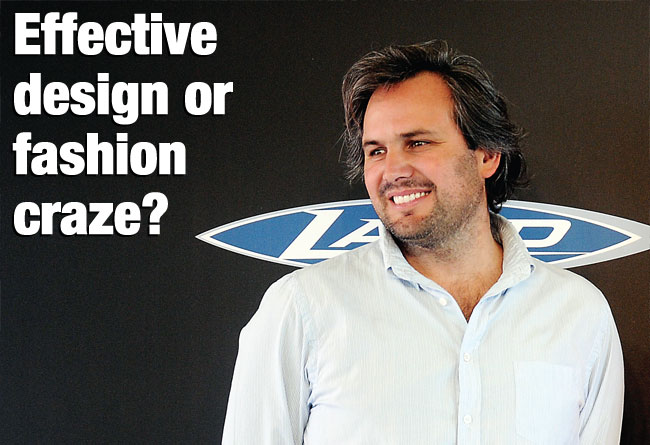 Perhaps Juan Kouyoumdjian’s most famous innovation has been his modern take on hull chines, now appearing on numerous new production cruiser-racers. ‘But on most boats I see, they have no real effect,’ he explains to Øyvind Bordal…

We see them more often than not when a new production model is presented to the market. Distinct horizontal lines breaking up the rounded shape of the stern. A wide transom with sharp angles, instead of the traditional, unbroken arch.

At the same time a new buzzword has crept into the sailing vocabulary. It’s really an old term, describing a way of building boats from materials that can’t be easily formed in more than one direction, such as plywood, steel or aluminium. But nowadays the word has taken on a new meaning, and has a much more sexy ring to it. Chines are the new black.

Today’s chines carry a whiff of the Volvo Ocean Race, an image of full planing on the open sea. Chines symbolise something modern, efficient, stable and fast. But that’s all feelings. What are these chines really? What are the hard facts? What can they deliver, and how do they work? And can so many different boats really benefit from them…

Juan Kouyoumdjian, commonly known under the very-much-easier-to-spell moniker Juan K, is famous for being a straight talker. His fresh approach to yacht design, combined with a Latin temperament, has led to a few contro - versies in the racing design community over the years. But when we meet in the hotel lobby the first impression is a very accommodating, almost modest guy. And when he starts talking it’s obvious that he really tries to transform his very complicated trade into something understandable for outsiders.