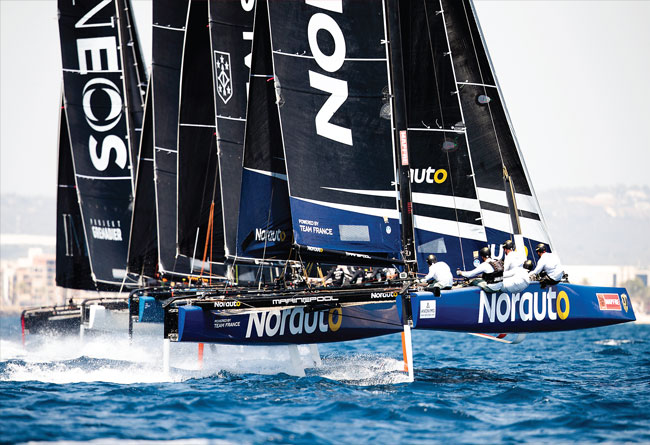 There is a major international foiling cat series out there designed for both pro and owner-driver teams where you can take on America’s Cup skippers (but without spending America’s Cup money...)

GC32 – grand prix foiling cat racing
Driven on by the last three America’s Cups, development in sail boat design has taken some of its biggest steps forward over the past decade. Leading the charge have been foiling multihulls where America’s Cup technology, to make these boats fly, has now filtered down to the mainstream.

Back in 2013 the GC32 cat was born with the aim of bringing state-of-the-art America’s Cup-style foiling catamaran racing to regular racing sailors. The boat was conceived by Laurent Lenne and Australian catamaran specialist Andrew McPherson and designed by Martin Fischer who is currently design co-ordinator for Luna Rossa.

It was fitted with the latest foiling technology, but being free from America’s Cup rules enabled it to be a ‘better foiler’, as Fischer describes it. For example, the J-shaped foils and T-rudders are large for the boat’s size, but this enables greater stability in flight. This aspect of the design was important as it not only made the boat relatively easier for amateurs as well as professionals to helm, but meant that the foils required less trimming with no need for the complex (and heavy) hydraulics that were essential on the AC45s and 50s.

On the GC32 the foils can be raised and lowered manually and foil rake is adjusted quickly but precisely using a simple ropeoperated worm drive.

Early dockside buzz that ‘the large foils will make her slow’ was quickly silenced when GC32s started recording speeds approaching 40kt – for sure not the nearcavitation- inducing 50kt of an AC50/F50, but still exceptional for a 32-footer. The GC32 will foil off the wind in 6-7kt of wind and upwind in 20kt+.

Where the GC32 scored highly then, and still does, is in achieving all this through simplicity. Given the access to complex America’s Cup technology it would have been easy for the class to get drawn into making the boat more complex, but in doing so increasing cost and weight, as well as needing more manpower and time for assembly and disassembly at each event.

A welcome side-effect of avoiding this is that the GC32 is a boat where sailing skills dictate results more than technology and development. As Oman Air skipper and former match racing world champion Adam Minoprio explains: ‘No hydraulics means the GC32 is actually a sailing boat.

‘The crew have to be working together and have physicality. It isn’t just grinding and pushing buttons. With these boats everyone onboard is sailing and it is really good fun. But everyone needs to work in sync to make the boat go fast.’

For example, the GC32 doesn’t have a wing. This would have increased performance and made foiling gybes easier, but its traditional catamaran soft sail rig with just four sails – main, two jibs and a gennaker – is cheaper, more reliable, easier for teams new to the GC32 to adjust to, allows sails to be dropped and the boat to be moored alongside after racing. The GC32 can be transported around in its own container or by road trailer and be assembled in just one day by two people. It can even be done without a crane if necessary.

Emirates Team New Zealand skipper Glenn Ashby, who sailed on Team Tilt when it won the worlds in 2018, and was runner-up this year, appreciates the simplicity. ‘It is great. This boat really fits a purpose. Everything is manually operated. There are no electronics or hydraulics or batteries to go wrong. For teams that are new to foiling it is a fantastic boat.

‘The AC teams like them because apparent wind angles are similar and the closing speeds are very high, while the decision making and the communication processes you have to go through are more similar than they would be on, say, a TP52.’

Obviously that simplicity helps keep down costs, as does the boat’s one-design nature. Significantly the GC32 is now a ‘mature’ one-design. In the world of high-tech yachting this means that not only are costs prevented from escalating, but those teething problems you don’t read about in the brochures have been solved: the GC32 has been through the inevitable phase of parts (notably foils) breaking and today has a good record for reliability.

By having a strong class association with its own measurer (who operates spot checks during events), the integrity of the GC32’s one-design status is maintained.

The class rules also evolve steadily both to improve the quality of racing and keep a lid on developments that would require teams to spend big money to keep competitive. This plus the robust carbon construction means older boats can remain at the front for many seasons.

In recent years there have been two key milestones in the development of the class. At the end of 2017 the GC32 was officially recognised by World Sailing as an inter - national class. This enabled it to hold its first official world championship.

Main picture: relive those America’s Cup dreams every weekend… The GC32 fleet blasts across the startline at the Copa del Rey Mapfre as the most spectacular fleet at Spain’s most spectacular regatta. Ben Ainslie and Ineos UK (below) have been using the GC32 Racing Tour for America’s Cup training, finishing third at the 2019 GC32 World Championship in Lagos, Portugal to run-away winners Alinghi and second-placed Team Tilt – with Team New Zealand skipper Glenn Ashby onboard. America’s Cup skippers all 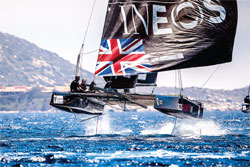 For 2019, with the end of the Extreme Sailing Series, many of the teams moved onto the GC32 Racing Tour, now into its sixth season. Top teams like Alinghi, Red Bull and Oman Air joining the Tour has raised the level of racing. The masterclass Alinghi gave at the Lagos GC32 World Championship, winning with two races to spare, demonstrated that even the most experienced teams still have much to learn to get consistent speed from their foiling machines, including smoothness manoeuvring, mastering foiling gybes and starting.

From very early on the GC32 Racing Tour acknowledged that for both pro/sponsored teams or teams with busy, time-poor owner-drivers, any racing days lost represent a considerable waste of time and money. Thus the Tour actively plans to minimise this.

Venues are chosen that provide reliable foiling conditions, in other words prevailing winds of 10-15kt and flat water. For example, in 2019 the Tour started in Villasimius in southeast Sardinia and had its world championship in Lagos, Portugal before joining up with other grand prix classes at Copa del Rey Mapfre in Palma then moving on to Riva del Garda.

To ensure the maximum racing takes place the GC32 Racing Tour also employs its own race team led by PRO Stuart Childerley. In addition the Tour has its own safety team with a safety leader and diver in addition to the local course marshalls. On-the-water umpiring using the RRS Fast Boat Edition is standard.

The GC32 Tour also operates a guest programme using mostly club infrastructure, sometimes with VIP tents ashore. A lucky few also get to experience fast foiling in the guest position on each boat. For this purpose the Tour pioneered its Speed Challenge of two reaches with a gybe in between for guests to experience first-hand the excitement of catamaran foiling.

A key element of the Tour is the ownerdriver teams which presently include Melges 32 double world champion Jason Carroll and Argo from the US and France’s Erik Maris and Zoulou – a past Mumm 30 world champion. Then there are the top small cat sailors like (GC32 association president) Simon Delzoppo from Australia and Federico Ferioli from Argentina. Past owner-drivers have included Kiwi Orma 60 owner Simon Hull and Monaco’s prince Pierre Casiraghi with Malizia.

‘The GC32 is a great boat for an experienced owner-driver,’ says Simon Delzoppo. ‘It is not a hard boat to sail well, it just takes a while to get to that point where you can sail it consistently well.

‘The Tour obviously has a lot of professional sailors competing so for an ownerdriver you have to go in with the aim of running at least a semi-professional team to be competitive. There is no reason why a bunch of mates couldn’t enter, but it would take them a while to get up to speed.’

For sailors looking to get into GC32 racing new boats are available from Great Cup BV; good used boats can be bought for around 280,000 euros. As the Tour has been going for several years now there is also a useful pool of experienced crew.

Check here on more information on the GC32 Racing Tour »