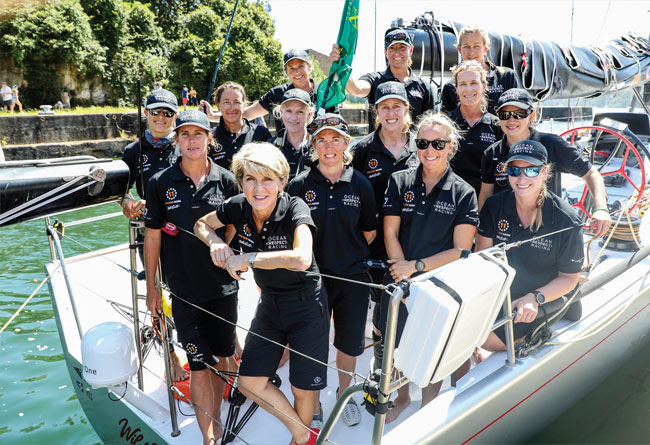 Two birds with one (Aussie) stone... why not?

Stacey Jackson had a vision of putting a team of professional female sailors together to compete in the 74th Rolex Sydney Hobart Yacht Race, then using the biggest event in Australia’s sailing calendar as a platform to elevate the message of sustainability, raise awareness of the need to restore ocean health, and inspire action for positive change. This vision was supported by two principal backers; the Oatley family who provided the Reichel/Pugh 66 Wild Oats X, and 11th Hour Racing, the team’s sponsor, which promotes ocean health through strategic partnerships within sailing communities.

The team, Ocean Respect Racing, came together with 68 Hobart races and 21 laps of the planet between them. The focus was on winning the race, inspiring future generations of young sailors and promoting environmental responsibility. This powerful initiative was born from viewing first-hand the scale of the problem of ocean health, as Jackson outlined just before the race start.

‘I was motivated by the amount of debris I came across in the ocean during my two Volvo Ocean Races around the planet - that really hits you; an eye-opener was where I saw it, not even close to land, confirming that pollution really does travel vast distances. What became very important to me was the educational work that we did with Vestas 11th Hour Racing, and why it is vital to reduce single-use plastics and look after our oceans’ health. I became highly involved with the activations that we carried out at the various stopovers around the world, and at the end of the Volvo Ocean Race I knew that I wanted to continue this work. I returned home to Australia to find a large number of yacht clubs using plastic cups, plastic water bottles and plastic straws. My home – which is a beautiful country and wonderful place to live – is somewhat behind with this issue. People are still buying bottled water in supermarkets or service stations, and takeaway coffees in single-use cups, rather than carrying their own bottle or keepcup. I think we can help spread the message that change can be achieved one degree at a time. We all have to start small and work big, particularly in the sailing industry with single-use plastics.

Main picture: after witnessing first-hand the shocking amount of debris that litters our oceans during her two Volvo Ocean Races, Stacey Jackson decided to raise awareness of the problem by putting together an all-female professional racing team to compete in the 2018 Sydney Hobart race, with help from 11th Hour Racing and the Oatley family

‘So in mid 2018 I started working on this new project, which became Ocean Respect Racing, connecting with women whom I knew would get involved if I got it up and running. I then approached Sandy Oatley from the family who owns Wild Oats X and XI, and suggested an all-female team in the Rolex Sydney Hobart Yacht Race – would he be interested in having a conversation about this? Sandy immediately responded in a highly positive way, supporting us by loaning Wild Oats X and taking care of all the race preparations, which was a truly fantastic gesture and one that enabled this project to evolve into a partnership with Wild Oats Yachting and 11th Hour Racing.

‘The Oatley family is highly supportive of this message, which they are implementing on Hamilton Island – one of Australia’s most spectacular holiday destinations in the heart of the Great Barrier Reef – in the push to reduce single-use plastics and the overall impact of their operations on the surrounding environment. One of the critical data you have to remember is that current research shows that by 2050, if we don’t create significant change, there will be more plastic in the ocean than fish. That's why our team is ditching single-use plastic and encouraging our fellow sailors to do the same.’ 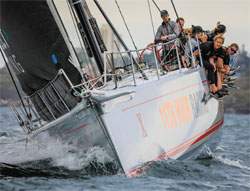 Above: Stacey Jackson’s team, Ocean Respect Racing, was sixth across the finish line and second overall on handicap.
Below: think global, act local. Before the start, the team removed 12 big bags of plastic waste from a supposedly clean Sydney Harbour beach. 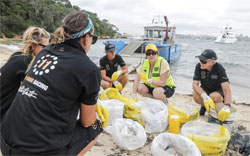 Ahead of the start of the Rolex Sydney Hobart Yacht Race, Ocean Respect Racing joined forces with Clean Up Australia, the not-forprofit Australian environmental organisation, to raise awareness about how rubbish finds its way into the ocean, and encourage positive behaviour change. At beautiful Whiting Beach in Sydney Harbour, the team removed 12 large bags of rubbish, filled with soft plastic wrappers from food, cigarette butts, plastic water bottles and many tiny plastic pieces that were unidentifiable. As part of its commitment to leave a lasting legacy in Australia, 11th Hour Racing awarded a $10,000 grant to Clean Up Australia to support the organisation’s mission and expand its waterway cleanups.

The interest both nationally and internationally for Jackson and her Ocean Respect Racing crew was phenomenal, and was also helped by having the team’s ambassador and Australia’s former Foreign Minister Julie Bishop on board Wild Oats X for the Boxing Day start of the race in Sydney, jumping from the boat as they raced past Bondi, making the team front page news and helping promote their message.

As the team’s ambassador was being safely collected in a chase boat, the Ocean Respect Racing crew pushed south, just behind the five 100-footers leading the fleet to Hobart. The challenge for the fleet in this year’s race was the Bass Strait transition, and navigator Libby Greenhalgh nailed it, emerging through the fog and shaking off all but one competitor, the fellow Reichel/Pugh 66 Alive, which they match raced down the east coast of Tasmania to Hobart. Having blown out a panel in their A2 pushing the boat hard earlier in the race, Jackson and her crew were without that key sail to stay close to Alive, who pulled away from them up the Derwent river to win the race overall on handicap.

It was a superb performance for the Ocean Respect Racing team to secure second place on IRC and sixth place over the line – all of this with only 12 days sailing on the boat before the race. The reception the team received when they docked in Hobart was extraordinary, showing the power of Jackson’s vision around sustainability, ocean stewardship and female leadership, creating a catalyst for change in Australia and beyond.

Though the 2018 Rolex Sydney- Hobart Race is over, the work inspired by 11th Hour Racing continues: it started immediately with the crews on both Wild Oats X and XI collecting ocean water samples from selected areas up the east coast of Tasmania, in the Bass Strait and off the NSW south coast on the delivery back to Sydney, for an analysis led by Griffith University to check levels of microplastics in the ocean, providing key data to assist in understanding the problem and help promote change for the health of our oceans.