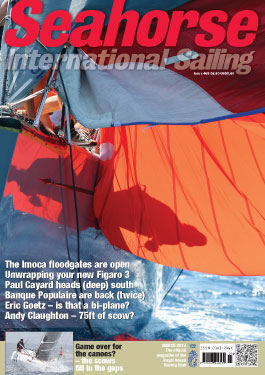 Life at 40
Room for one more at the inn... ROB WEILAND

(Still) the greatest game in town
Hello, Mr Bond... a new boat from the east and a ‘new’ crew put to the test. ANDI ROBERTSON

Suits you, sir
In very few years foiling has gone from being a single area of focussed development to a sphere of experimentation. ANDY CLAUGHTON

Coal face
Buying a new Mini Scow is not the answer in itself... just the first step on a complex journey JOE LACEY

The Figaro milieu
Be there or, well, at least be ready to get left behind. And this year an extraordinary influx of great champions of shorthanded ocean racing will only make your task harder, but potentially also more instructive. MARCUS HUTCHINSON

Anatomy of a project
Take a detailed brief from an experienced client who knows exactly what they want, but nobody really knows how to get there... ERIC GOETZ

Start as you mean to go on

A long way from Tokio

Update
Sad times –November 1969 and the first edition of Seahorse has just appeared. Now ANTHONY CHURCHILL who started the whole story off has gone; TIM JEFFERY and LUCY PUMFREY remember a polymath with Sydney-Hobart and Admiral’s Cup victories on his CV. Plus, just where is that Hobart race headed, who’s showing at the party and loving the mule. JACK GRIFFIN, TERRY HUTCHINSON and DAVID SALTER

Paul Cayard – Taking responsibility
Meet the chairman of the board!

IRC – Breathing new life
Last year’s combined offshore worlds in the Hague turned out to be a win-win all round and the benefits keep flowing. JASON SMITHWICK

Sailor of the Month
Couldn’t be less similar but both are making an indelible mark (also less similar...) on sailing