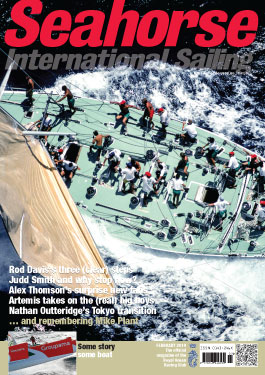 Extraordinaire
The exception that proves the rule? Whatever the underlying reasons no modern raceboat has proved as enduringly successful, and as enduring, as Idec Sport. JOCELYN BLERIOT, VINCENT LAURIOT PREVOST and XAVIER GUILBAU

A whole new language
Following the 2017 Cup Artemis took a major swerve and once the die was cast for AC36 there became no looking back. JOHN NICHOLLS and JAMES BOYD

Brazil 1-2
Wowza… this kid ZARIF is hot. Drops in to race the 2018 Star Worlds and wins, rolls on to the Star Sailors League Finals in Nassau and wins again. JAMES BOYD looks up from his parasol

Champion
JUD SMITH is the (mostly) gentle giant of one design keelboat sailing… racing and sailmaking. And in 2018 he moved aft in the J/70 to knock his previous skipper off his perch. CAROL CRONIN

Details
The last 36 hours of ALEX THOMSON’s Route du Rhum campaign got more than its fair share of airplay… though for all the wrong reasons. But the story was not as cut and dried as it looked to some of those observing. FRED AUGENDRE

Hard at it
North’s answer to the cable-less question

Way to go
Good race-winning tools can be subtle…

Update
welcome return to Cup world and full focus on the new (old) boat (watch this space). Plus things that go crunch… during the day. JACK GRIFFIN, TERRY HUTCHINSON and NEIL HARVEY

ORC – A place in the sun
… and you also get to take along your favourite toys (and pals) to play with. SHAUN CARKEEK

Seahorse build table – Something different
This one surely is? TOMMY GONZALEZ