Everyone’s (hard) at it 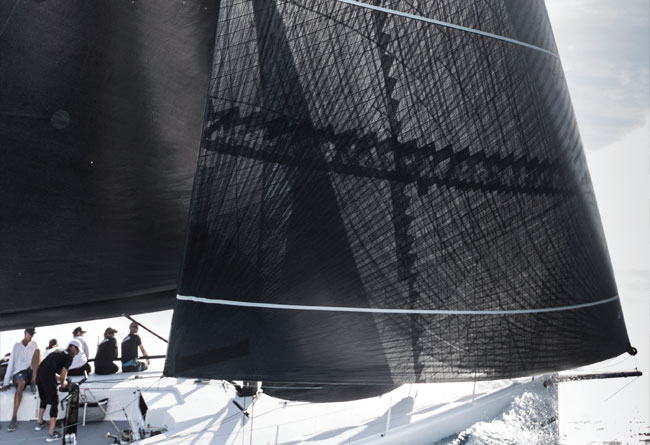 There are few areas of raceboat technology harder to keep secret than the latest sail designs and engineering solutions. One of the hottest – and most publicly visible – areas of development right now is perfecting a cable-free headsail that not only goes fast… but that also lasts

There has been a significant amount of hype and hyperbole about the development of headsails without furling torque-cables, and, like most good ideas, this concept has been around for a while. At North Sails their designers began working on this concept with Oracle Team USA and Emirates Team New Zealand during the 34th America’s Cup, when radical boat designs placed extreme loads on the 3Di headsails. The design and engineering challenge was to deliver a solution where headsail loads were redistributed from the torque cable/headstay and shared with the sail. Known within the North offices as Load Sharing Technology this feature, when paired with a 3Di Helix Luff, is North Sails’ answer to what others may call the cable-less headsail concept.

Main picture: North Sails’ new Helix Luff technology transitions headsail loads out of a traditional anti-torsion cable and redistributes them, optimising the load distribution throughout the sail and potentially reducing the overall loading

North’s head of engineering and design JB Braun explains, ‘trying to reduce loads on boats and rigs while maintaining headstay tension has begun a trend and has opened up design ideas to rethinking the significance of luff cables, and in the case of Helix sails, to transition load out of a traditional anti-torsion cable and redistribute it into the sail. 3Di technology is better suited to the sharing application because all 3Di sails are engineered with tapes laid in varying orientation and depth to optimise load distribution throughout the sail. 3Di’s intrinsic load sharing properties, coupled with a Helix Luff effectively move load reliance away from a cable/headstay and into the sail structure thus potentially reducing the overall loading.

‘The critical breakthrough with Helix sails is that redistributed loads allow the headsail to project forward the structure on the front of the sail to achieve headstay tension and luff projection, while reducing the load on the boat, mast, and rigging. The engineering emphasis is focused on the innovative, barely visible carbon Helix Luff structure, a 3Di design manipulation which projects the sail forward, punching the luff out in front of the boat. Load Sharing Technology coupled with the Helix Luff is empowering North to reimagine both roller furling downwind (Code Zero and A-3 style sails), reaching sails, and even may translate to some styles of upwind sails. It’s almost like another trim point. The 3Di technology paired with the powerful North Design Suite tools enables mapping and displacing loads to deliver lighter, more efficient, and beautifully smooth sails.’

Above and below: recent feedback from Steve and Heidi Benjamin’s TP52 Spookie makes a compelling case study for this latest advancement of North Sails’ 3Di. Using North Helix sails they have reduced the tack loads by half (compared with a conventional Code Zero) while also achieving more forward drive. This creates a lot of potential for weight reduction throughout the boat 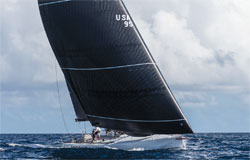 North Helix sails are not aimed at one size or class of boat, but are suitable for most boats from mid-size IRC designs to TP52s, Imocas, Volvo boats, WallyCentos and 100-foot Maxis and even Superyachts. Recent feedback from Steve Benjamin’s TP52 Spookie using North Helix sails was that they were recording about half the tack loads of a conventional Code Zero with similar or even better luff protection. This means less mast tip sag, less sideways sag, significantly less loading on the bowsprit, ropes, winches and deck gear… all with a sail that is projecting better and creating more forward driving force. Many of the loads on an existing boat are reduced – and for a new design, there is significant new potential for weight reduction throughout the entire boat.

North Sails Group president Ken Read expands, ‘Helix sails are the latest advancement of 3Di, a technology where North Sails focuses the majority of our R&D effort. We often move ahead without a great deal of fanfare because making lighter, and faster and more efficient sails is the bedrock of North Sails. The big gains with Helix and Load Sharing Technology, especially on reaching and broad reaching furling sails, is overall weight reduction and the ability to really adjust the leading edge of the membrane’s shape with a very small luff cable or rope. Not the large and heavy Torque cables that have become commonplace. We are very excited as to all of the avenues that this has opened for the use of 3Di in this process’.

‘The beauty of North Sails is the amount of technology and software that goes into what we create. We made some new Helix Code Zeros in the summer, when our brief was to be conservative. Now we are reaching into the finer details with our North Design Suite which allows us to map deeper into these same sails.

‘The best part of being a part of this company is when we really let our smart people loose to go exploring with our North Design Suite. This is a generational opportunity for using 3Di structure and how it all works; these sails will keep evolving and have already spread into non-furling sails, where load-sharing is going to potentially allow upwind headsails to have similar characteristics without the sideways sag. We believe that the North Helix sails are now lighter and faster than any other sail out there. I can tell you that the new sails coming out now are nothing short of phenomenal!

‘With any new concept, North Sails are always searching for a downside. Right now, we are aware that none of these new types of furling sail have been in the marketplace long enough to fully assess their true working life; we are also aware of longevity issues with sails from other manufacturers. That said, 3Di sails outlast the most extreme conditions, and of all the options, we’re confident 3Di will always stand up better than a mylar laminate.

‘What is important for us now is to cover all the bases with a focus on both performance and longevity. Our commitment is to a smoother sail that will furl and perform better than anything else out there. With North Helix sails, this is happening right now.’