Heart of the (interesting) action 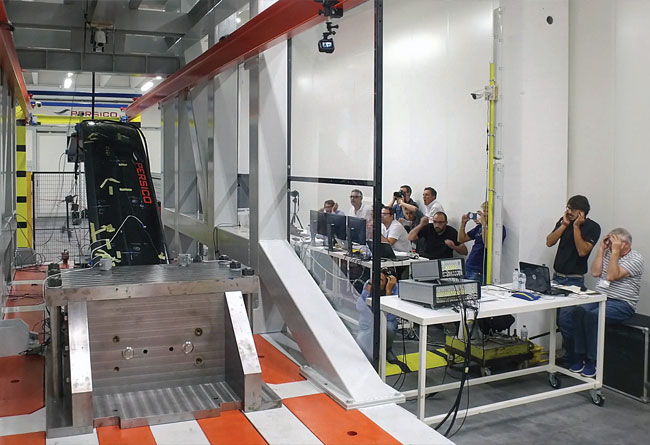 Based in Nembro in northern Italy, Persico is not a normal boatyard… and they certainly do not turn out normal boats

There’s a lot happening at Persico Marine right now. The renowned Italian shipyard, which ranks among the world’s leading builders of highend racing yachts and large, highperformance luxury sailing cruisers, has a wide range of ground-breaking projects on the go.

The latest news is from Persico’s racing yacht production facility at Nembro in Lombardy, where two America’s Cup projects are under way. In addition to building the boats for the Italian challenger team Luna Rossa, Persico is also developing the hydrofoil arms that will be used by all of the teams in the forthcoming Cup.

An interesting Imoca 60 is also taking shape at Nembro and various structural components including foils, beams and rudders are being produced for the 100ft Ultim Class trimarans Gitana and Sodébo.

Meanwhile, a 145ft Wally superyacht is now in build at Persico’s performance cruiser shipyard in Massa-Carrara following the launch in September 2018 of the Umberto Felci-designed P65, a remarkable and radical cruiser-racer that redefines the genre.

Main picture: in addition to building the hulls for the Italian team Luna Rossa, Persico is developing the hydrofoil arms that will be used by all of the teams competing in the next America’s Cup in 2021. The first prototype foil arm was recently produced using a new manufacturing process developed specially by Persico. And then it was tested to destruction...

New manufacturing processes
Persico has developed some new composite manufacturing processes that take advantage of the ways in which machines and infrastructure have evolved over the last decade. The rest of the industry has noticed Persico producing exceptionally highquality parts with remarkably fast delivery times and at keenly competitive prices.

These new processes play an important role in the construction of the Ultim class trimaran foils and even more so in the manufacture of the foil arms for America’s Cup yachts. The first prototype foil arm was recently completed and used to test every aspect of the engineering and build processes to the limit. For the engineers, builders and clients involved in the project, being able to test a major structural component to destruction was a rare opportunity.

The extensive test programme was conducted in collaboration with Luna Rossa, with representatives from all other active America’s Cup teams. The behaviour of the foil arm was monitored with state-of-the-art procedures and hi-tech equipment, including fibre optics, acoustic emissions tests over its entire surface, and ultrasound testing. By cross-referencing three concurrent sets of real-time data, it was possible to precisely diagnose the foil arm’s behaviour under load. To run these tests, Persico designed and built a huge machine capable of exerting the massive load necessary to test the foil arm to the point of failure. This testing rig is now available for other clients to use.

Imoca 60
Persico has been working on one 60ft racing yacht for more than 18 months and there is excitement in the yard at the news that it will now be completed – and all the hard work will not be wasted. Originally conceived as a prototype for the Volvo Super 60 one-design fleet, it has now evolved into a singlehanded offshore racer for the French solo skipper Thomas Ruyant. The boat will be put to the test in Imoca class racing in the run-up to next year’s Transat Jacques Vabre and the following year’s Vendée Globe.

The second-generation foiling Imocas, like this one, have taken a big step forward in design terms from the first generation and we’re now seeing them almost fully flying on their foils. No doubt we will soon see records broken once again.

Ultim Sodébo
Over the past year Persico has been working closely with Team Sodébo, supplying the aft beam and foils for their new Ultim trimaran, which will be skippered by Thomas Coville. The aft beam is a very sophisticated component with complex geometry and it is built in high-modulus carbon fibre to create an elegant, ultralightweight structure. The tooling presented an interesting challenge due to the beam’s serpentine shape, which required intensive use of five-axis CNC milling machines. No problem there for Persico.

Ultim Gitana
Team Gitana also presented some interesting challenges for Persico with commissions to build a deckhouse for their Ultim class trimaran Edmond de Rothschild, containing its nav station and accommodation, and also a very complex set of rudders and elevators. The deckhouse was a spatial challenge, with more holes and openings than the rest of the yacht’s composite structure.

The rudders and elevators on these giant flying multihulls require constant development because the boats themselves are evolving rapidly. Persico Marine was selected to build Gitana’s next set of rudders and took the opportunity to deploy a wide range of hi-tech processes and machinery that it has developed in recent years. The build process started with ply-by-ply computergenerated files fed into plotter cutting machines, then curing in sophisticated autoclaves. CNC machining at various stages throughout the process ensured the highest quality, lightest weight and most accurate shaping of exterior hydrodynamic surfaces. The rudders and elevators have just been successfully load-tested at Gitana’s base in France, and Persico’s production team is very pleased with the results.

P65 cruiser-racer
Persico is also proving to be very adept at building and fitting out large, complex, high-performance cruisers. One recent example is the awesome P65, a very unusual yacht born of a collaboration between Persico and the Italian designer Umberto Felci, which has been aptly described as a seagoing Ferrari.

The exacting commission came from an Italian client who wanted a dual-purpose yacht: one that he could easily handle himself without any crew to assist him and cruise with his family in luxurious comfort, but that could also compete on an equal footing against purpose-built racing yachts in long-distance offshore events – either as a singlehanded racer or with a professional crew on board. The initial design process involved extensive hydrodynamic research and modelling, comparing the form stability and wave resistance of seven different hull forms to identify the optimal canoe body. The result was a remarkably streamlined, powerful and sleek hull with very low freeboard, a flush deck with cleverly concealed deckhouse windows and an elegantly chamfered reverse bow. Cup-shaped sections deliver the required form stability at high angles of heel while wave resistance is reduced to an absolute minimum when the boat is on an even keel. The design has also been optimised to give the most comfortable motion possible at sea and to be agile and easily driven under power.

Perhaps the most remarkable aspect of this unique yacht is its displacement, which at just 18.5 tons is almost unbelievably light for a 20-metre offshore yacht with a fully fitted cruising interior. This was achieved by leveraging all of Persico’s considerable expertise in producing and optimising Grand Prix racing yachts. The carbon sandwich hull uses variable densities of foam in its core, depending on loading and was formed in a five-axis CNC-milled female mould, using a specially designed three-step infusion process that can almost match the resin density of pre-preg carbon panels.

Above and below: the all-Italian P65, built by Persico and designed by Umberto Felci, is a remarkable and radical new cruiser racer that redefines the genre. Its 18.5-ton displacement is almost unbelievably light for a 20-metre offshore yacht with a fully fitted cruising interior. The carbon sandwich hull uses variable densities of foam in the core, giving maximum stiffness where it is needed, and boasts a resin density that is almost as good as a comparable pre-preg panel. The interior layout is carefully designed around the yacht’s main structural members to reduce the number of extra panels needed to subdivide the accommodation. All of the interior furniture is made using the lightest possible composite materials 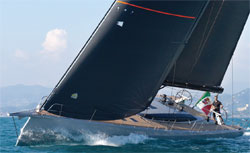 The P65’s interior layout is carefully designed around the hull’s structural members to reduce the need for extra panels to subdivide the accommodation. All interior furniture is made of ultra-lightweight composites. To further reduce the yacht’s all-up displacement, an extremely deep lifting keel can put its 6.2 tons of ballast 4.25m under water. The 24-volt DC hybrid propulsion system with 1,000 amp hour lithium-ion batteries weighs less than a comparable marine diesel.

Also remarkable is that all of this weight reduction has been achieved while keeping a tight control on the overall cost of the project, which could enable Persico to put the P65 into production as a competitively priced semi-custom yacht.

Wally 145
The largest yacht that Persico has ever built is currently taking shape in the Massa-Carrara shipyard. The commission to build the Wally 145 offers a unique opportunity for the yard to apply all of its technology, experience and recent innovation to a ship-size performance cruiser. As with the P65 and previous builds such as the Wallycento Tango, an enormous effort has been made to reduce the weight of the yacht’s composite structures and all of its systems. Attention to detail is crucial. Every component of every system has to be carefully optimised to ensure that the yacht achieves its ambitiously low target displacement. The inherent challenges and complexities of this mammoth project are sure to drive Persico’s innovation to a new level.

The Wally 145 will be fitted with a hybrid propulsion system, with two MAN diesel engines capable of driving the yacht at a maximum speed of 16 knots. For quiet running under electrical power, retractable shaft lines will connect the two fixedblade propellers to a pair of 60kW electric motors. This setup is designed to generate enough electrical power to charge the huge batteries that power all the systems when the yacht is under sail.

With all of these innovations and more, Persico keeps raising the bar higher. In the last few years, it has demonstrated not only leadership at the cutting edge of composite manufacturing and racing yacht production, but also a remarkable ability to produce very large and complex high-performance cruising yachts, where systems engineering and project management can be at least as challenging as Persico’s original core business of high-end structural composite manufacturing.