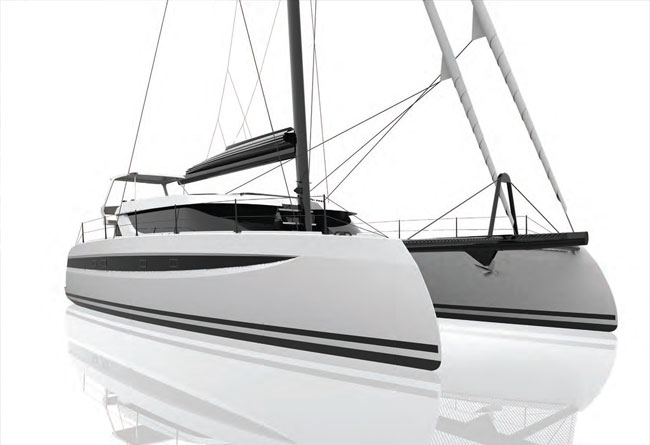 It's a dictum in life that you can’t get something for nothing and nowhere is that more true than modern performance catamaran design. The trade-offs in weight, trim, performance and cost are nearly absolute, even with clever innovations in layout and design. Where you save in one parameter, you lose in another, so the challenge for builders and designers is finding a solution that optimised all those parameters without being too compromising for an increasinglydiscerning marketplace.

Hudson Yacht Group may have found a new sweet spot in this space with the recent introduction of the new Ocean Series of blue water luxury performance catamarans, billed as “ocean tough, muscular yet graceful, and ready to take you cruising... in comfort and ease”. While the HH line of big cats – the HH50, HH55 and HH66 – are now well-established in the genre of nocompromise performance and luxury without too much constraint in cost, a place where only the finest in all aspects of build materials, quality and high-technology solutions are permitted, Hudson has realised there is room in the market for another level that, with a few compromises, can bring big cat luxury and performance to a much wider audience.

This realisation came about when Chris Doscher, the new president of Hudson Yacht Group, went touring some key boat shows in both the US and Europe with company founder Hudson Wang and listened both to current and potential owners of big cats. What they heard was interesting, and a bit surprising especially to Doscher, who has spent the last decade in the production boatbuilding business as sales manager with another major brand, one that has a large volume business in this broadening market.

‘What I heard was surprising,’ said Doscher. ‘Our assumption has always been that cats were favoured by those who wanted to have lots of living space and stability for their experience onboard, with sailing qualities a comparatively minor priority. So many of the boats offered provide this experience and harbours are full of them.

‘But if you ever sail one of these, as a sailor you’re left unsatisfied – the helm is heavy, the boats unresponsive in anything but the strongest breeze, and for me it’s just a leaden experience.’ Doscher should know, having been competitive in both the Farr 40 and Mumm 30 circuits.

Main picture: A tour of boat shows in Europe and the USA convinced HH founder Hudson Wang and president Chris Doscher that there is room in the market for a de-tuned version of the existing and now well established line of HH performance cats, a new range of boats that delivers a more relaxing experience at a lower price point. The Ocean Series is their new offering for that market

‘So when we really talked with people about sailing and not just luxury, they revealed that this was in fact really important to them, that they looked forward to sailing a boat that offered good performance but without going to extremes.’

“Extremes” is of course a relative term where for some being on a foiled cat going 25 knots is quite normal, for others this may be a little outside their comfort zone, and they don’t want to invest in professional help to crew their own boat.

So it occurred to Doscher and Wang that there is a market space that would respond to big cat designs that are not at the HH level of performance sophistication, but at a slightly more modest level that is still fast (and much faster than the others) but not at a high price for purchase or operation. Subsequent discussions with designers Morelli and Melvin and the in-house engineering and design team at Hudson Yacht Group have found a suitable middle road, and new designs in the Ocean Series have emerged roughly based on the existing HH family of designs: the OC50, OC56 and OC66 models.

These boats are constructed in E-glass for hull, deck, superstructure and interior paneling, saving 30 per cent in material cost compared with carbon, but are still moulded and resin-infused just like the carbon panels with optimal resin to fibre ratios to optimise strength and weight. And in critical structural areas where absolute strength and rigidity are needed, (such as the cross beams and other framing elements), Ocean Series boats do have carbon for its incredible strength.

Designer Gino Morelli has insisted that some new features be included in the fabrication process to preserve the heritage Hudson Yacht Group has in always searching for innovations. In this case it is the choice of PVC core material for the Ocean Series, which is the latest version of Core Cell, and the epoxy resin choice for the hulls is a new eco-friendly variety that will have less impact on the environment both during assembly and at the end of the yacht’s life. While large production operations may not adopt these due to the scaled-up increase in cost, both Morelli and Hudson felt that this small additional expense is minimal and worth it to an owner group who will likely have some uncompromising views on supporting sustainable life on the planet. 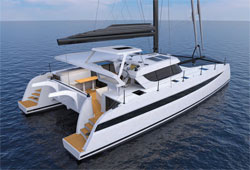 Although built using the same tooling as the HH50, HH55 and HH66 multihulls, carbon is switched out for E-glass, saving 30 per cent in materialsʼ costs. Instead of lifting boards there are now fixed stub keels to reduce complexity and expense, sail handling systems are designed for shorthanded sailing, while the standard mast is now aluminium and not carbon. The end result is a relatively similar yacht but with less complexity and a lower price point 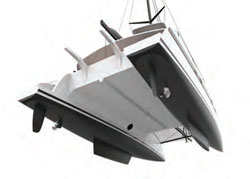 The Ocean series has other features that differ from the HH highperformance line. Rather than hightech curved dagger boards built in pre-preg carbon and post-cured in an autoclave for no-compromise strength and high performance, along with the complex systems needed to extend and retract these boards, the Ocean Series has no boards at all. Simple, long, low-aspect keels in each hull minimise leeway while helping the boat track along at minimal draft. Yes, there’s more drag, but there is also a lot less complication for sailors who are concerned about their cruising range in lagoons and shoal waters. These blades are only 0.5m deep on the OC50.

On top of the 30 per cent saving on materials by using E-glass instead of carbon fibre, for ease of maintenance and further cost reductions, the hulls, decks and superstructures in Ocean Series yachts are built in the same moulds as the HH line, but they have a gelcoat finish rather than being faired, primed and painted. The decks are made with vinylester resins to ease on cost and are built in the same high-quality stable tooling used in the HH line. Some more durable materials are used in the interior elements too, just to give the look and feel of weight and stability in a finely-crafted yacht, and details like expertly-finished laminates and wood composites are options that give the boat the look and feel of handcrafted excellence.

Doscher says an example of this attention to detail can be seen in the doors and their structures: ‘They are built in composites with wood trim, but we worked hard on finding exactly the right hinges and hinge springs so that they open and close properly. And the structure behind what supports these doors must be absolutely rigid and is often built in carbon – imagine hull flexing while underway that causes the doors to get stuck open – or closed!’

There is some additional weight from this approach (about a ton in the OC50 and about 1.5 tons in the OC56), but the effect on performance is acceptable for the massively reduced man-hours required for the build process.

To compensate for this extra ton of loading, buoyancy is preserved with a slight expansion in each hull’s width so that the fore-and-aft trim can be controlled. This sensitivity to trim is such that Doscher says relocation of some interior systems is necessary to avoid overcompromising on performance, so the interior layout options are different to those seen in the HH line.

Ocean Series cats also come with alloy spars as standard, although choosing a carbon spar from Hall or Southern is an optional upgrade. The effect on weight, CG and stability is measurable, but not so much that the boat does not hit its intended performance targets for fast cruising. Likewise, the sail handling systems are designed for ease of use by shorthanded cruising sailors. The designers deliberately developed user-friendly systems that don’t require specialised skills when taking in or shaking out a reef while at sea.

The initial interest in the Ocean Series has been so strong that the Hudson Yacht Group is gearing up for greater production capacity, hiring another 50 employees to increase production to a target of eight boats per year, nearly double the yard’s current capacity. Doscher says he already has seven confirmed orders for OC50s, with the first delivery expected to be in time for the boat show circuit in September 2019.

‘Of our current customers for the Ocean Series, only one has expressed a strong interest in racing, even among those who have a racing background. They really seem interested in what this boat can offer: fast, stable and accessible sailing in the cruising waters of the world.’