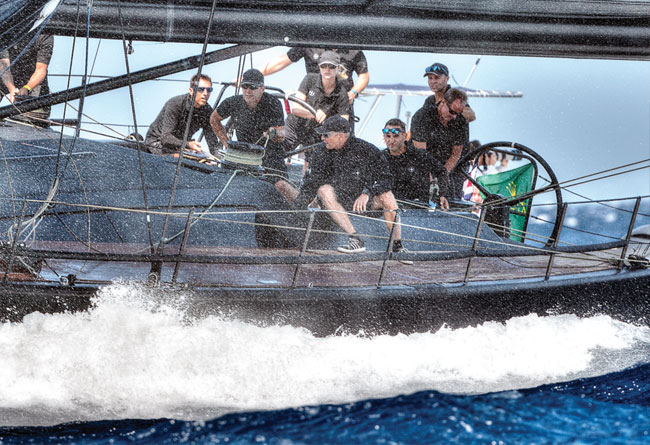 Busy times for the team at the International Maxi Association supporting all the events that now include Maxi starts, like the Rolex Capri Sailing Week, the 151 Miglia and the Rolex Giraglia 2018 inshore races at Saint Tropez, as well of course as the classic offshore to Genoa…

Each of these events has its management structure and it is not as if the IMA aims to be part of that – the IMA just tries to help the event organisers to reach out to Maxi owners as well as to be available to Maxi owners and their representatives as a link to individual event organisations. Technical support, like helping with the text of NoRs and Sailing Instructions, is given and often appreciated as Maxi sailing is complex, no two boats are the same and the range of diversity is huge, which is reflected in the rules of the IMA and its associated classes as well as in the variety of rating systems and class rule peculiarities that we see in Maxi racing.

It is no wonder Maxi sailing is a bit of a rule-maze with boats varying in size from 18.29m hull length… to no upper limit. Some are pure racers, some pure cruising yachts, and many are aiming somewhere in between these two. In the IMA rule these are respectfully referred to as Racer Cruisers but this surely includes yachts that would more aptly be described as Cruiser Racer… or even Cruiser.

In practice we see boats up to 200ft joining events, yachts by their sheer size complex in almost every aspect of running and sailing them, let alone racing them. As maxi racing only fills part of the day the social side is never far away. From an ice bucket with some bottles of bubbly to a glitzy party with a seated dinner for 1,000 people, live entertainment, light shows, large-screen videos and fireworks, it has all got to be planned and organised.

Main picture: The Wally 77 Lyra does the big left turn at the last Maxi World Cup in Sardinia… with fewer crew than a Fast40+. Lyra finished third overall in the Wally class of 11 yachts. ‘Maxi World’ has grown in every sense (aside from ‘active’ crew) in the last 20 years – there were no fewer than 50 yachts racing in Sardinia; add in several dozen superyachts that compete regularly and it’s hard to believe there was ever a financial crisis. Lyra was drawn by Frers back in 2000 when Wally Yachts was already turning the big yacht market – and look – on its head

And of course somebody has to pick up the tab… and generally this is done for a reason, so media and marketing are very much in the mix, quite often very stylishly at this level. All this is hard to describe in words – but if you are not one of the many who are lucky enough to race or visit the events, then possibly the photos and videos by the many artists who specialise in yacht races will make you aware that there is a world out there that is rather special. We like you to believe that sailing is sailing and rules are rules, whether Optimist or Superyacht. They are, but different…

You cannot escape sometimes wondering how it would be to actually own one of these giants and all that comes with it? Would it change me? Guess it would. Would I like it? No idea. Would I do a better job at the helm? Probably not.

Not having the answers to these questions and the simple fact that no two boats are the same, reflecting no two owners are the same, can only mean as an organisation and as its management we are chasing an ever moving target. Which is not a problem, just try to avoid chasing your own tail.

In 2017 in Newport RI we saw the first ever J-Class World Championship… who would have thought so in 1989 when I had the good fortune to be invited on a trial sail of the then recently launched Endeavour. That I lived to see all that. What’s next?

Racing superyachts has led to the creation of many specific rules and functions on safety: the RRS Appendix SY and the so-called RRS Safety Afterguard Member (RSA), often referred to as the Safety Officer.

The IMA is an association of Maxi owners. And with well over 50 members in the world of big boat sailing, for sure it is not a small club and a bit of a rare animal as it covers such a wide variety of ownership where other classes are mostly centred around a boat type or manufacturer (like J-Class, Wally, Swan, Southern Wind, Maxi72, Superyacht Racing Association).

With this comes naturally its goals and values, as well as its responsibility to be a meeting point for all these interests and to help streamline them into a manageable form. And to help resolve the occasional problem… even in paradise we sometimes have our differences.

For me, as class manager of the TP52 Class and the Maxi72 Class being used to being the only ‘employee’, which can be quite lonely at times, it is more than nice that the IMA by its sheer size requires and has a team of staff members. All self-employed parttimers like me, but for sure a team covering so many more qualities than one person can possibly have. As well as that they are great company.

IMA secretary general, so the boss, Andrew McIrvine leads the team. A man used to holding the wheel, whether of his own First40 La Réponse or in the many functions he had and has, among which being the current RORC Admiral.

Race secretary is Monica Recchia (who, equally important, also owns a wine business in Ibiza). The association’s own Technical Office is run by James Dadd (til not long ago the head of RORC Rating and now an independent consultant). Communications and PR as well as the face and conscience of the IMA are down to Maria Louisa Farris, who lives like our accountant Donatella Gianni in northern Sardinia.

I try to run the Maxi72 Class and assist the IMA team where I can. We somehow are a good match – may it last for a while and be of help to our members and big boat sailing in general…

Rob Weiland (covering for Andrew McIrvine, who is busy trying to become top boat in the 2018 IRC European Championship and Commodores’ Cup)