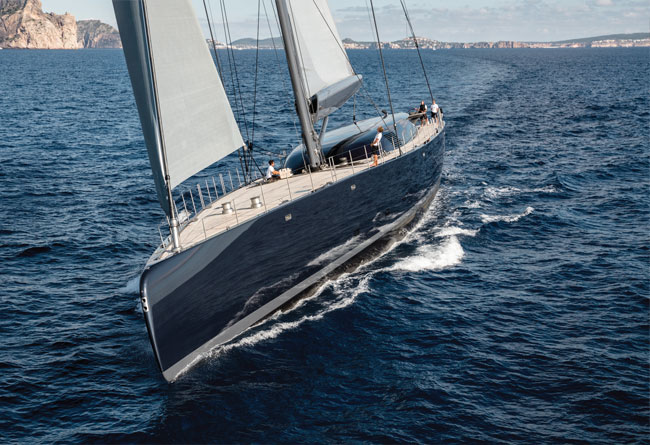 For many years the invisible power behind the throne of some of the world’s biggest and fastest yachts, the legendary, at times even mythical, Swiss composites engineers at Carbo-Link have emerged from the shadows…

Standing rigging has come an impressively long way from the sturdy but stretchy, wound stainless of our youth. The top end of performance yachting has since gone through rod, early composites such as aramids, Spectra, PBO and Vectran and ended up today mostly with carbon fibre. Teething problems with carbon fibre rigging, especially getting it to turn corners and terminate, have been solved and today, for some, the manufacturing process is more akin to boatbuilding. Incredibly, the very latest high-tech carbon rigging all but eliminate stretch.

Spearing this revolution for more than two decades has been Dr Andy Winistoerfer. For many years Dr Winistoerfer was a leading light at EMPA, the Swiss Federal Laboratories for Materials Science and Technology, where he developed the anchoring system for bundled carbon cables which is still in use today. His now well-established company, Carbo-Link, was born in the 1990s as commercial spin-off from EMPA and the STEM university ETH Zurich after they had been commissioned to design, engineer and manufacture the giant cables for the 124m cable-stayed bridge in Winterthur, Switzerland. The bundled carbon fibre cables supplied for this had a breaking load of 1,200 tonnes.

The upper echelons of the sailing world were quick to recognise the significance of these developments, especially in Switzerland where leading Orma 60 skipper Steve Ravussin came close to winning the 2002 Route du Rhum using some early Carbo-Link carbon fibre cables on his trimaran Technomarine.

Carbo-Link have continued to make major technological breakthroughs since then, many the fruits of working with Alinghi in the America’s Cup. Perhaps most momentous was when they developed the marine industry’s first solid or ‘consolidated’ carbon fibre rigging that helped the Swiss team on their way to victory in 2003 – though the final raceboat did not feature carbon as a result of rule restrictions.

Main picture: The Dubois 143-footer Ngoni went ‘full race’ with Carbo-Link consolidated rigging. It was a big step when the managers of the world’s biggest yachts first became confident enough in what was previously a race product to fit carbon rigging on these very different boats with their different but equally rigorous demands. Carbo-Link have long operated at the absolute cutting edge with the most aggressive competitive campaigns so the rigours of superyacht certification were just one more thing to deal with…

Carbo-Link’s thinking at the time – which remains unchanged to this day – is that consolidated rigging allows for smaller diameter, lower weight, reduced chafe and easy inspection as there is no cover. This approach has seen Carbo-Link enjoy continuous involvement in the America’s Cup from 2003, their cables having been fitted exclusively on all the AC72s, AC50s and the AC45’s platform rigging.

So what exactly is Carbo-Link rigging? Instead of being a bundle of protruded rods, it is ‘consolidated’, effectively a solid laminate, made from in-house produced, custom pre-preg carbon fibre tape wound around fully incorporated thimbles. It is also continuous – including not just the Vs but the diagonals too.

Typically, the starting point is determining the client’s exact demands – specifically stiffness and workload. Based on this, tapes are tailormade for each project with variables including not only their width but their thickness, the physical characteristics of the carbon fibre unis (modulus, strength, cross-sectional area, UV resistance and so on) and of the resin with which they are impregnated. While Carbo-Link offer the complete solution for their rigging, they can also interface with any deck or mast fittings from any manufacturer. Modifying the tape variables listed above, Carbo-Link can tailor rigging to exact requirements if, for example, they require higher stiffness or increased breaking load (a further benefit of the consolidated system is that these two features are no longer so directly linked).

Significantly, the resin matrix used is tough enough to offer excellent chafe and impact resistance and does not require a cover. As a result, consolidated rigging has an inherently smaller cross-sectional area, less windage and is lighter. ‘On an average 100ft yacht it’s like removing two “stop” signs that are always perpendicular to the wind,’ says Dr Winistoerfer.

Carbo-Link rigging is also designed to have the minimum number of terminations, resulting in further weight savings. The lack of any bonded joints results in more consistent loading behaviour along their length, minimising any localised fatigue. Like the terminations, spreader end fittings are not merely glued on, but are fully incorporated into the tape system and, as a result, they too are smaller and lighter.

The magic ellipse
For the 2010 DoG match America’s Cup in 2010 Carbo-Link made another significant step forward in developing low-windage elliptical section rigging for Alinghi’s maxi catamaran. In addition, some of these were fitted with fibre optics to provide load sensing. Similar cables were subsequently used on Franck Cammas’s 2011-12 Volvo Ocean Race winner Groupama 4, including partial-ellipse laterals and an elliptical bobstay.

Elliptical rigging has since been used across the majority of the America’s Cup catamaran fleets, where its reduced windage is well received, as well as in the Maxi 72 and IMOCA 60 fleets.

Carbo-Link’s R&D capabilities show a continuation of its university roots, with the company still doing much testing and product development work for EMPA and ETH Zurich, where Dr Winistoerfer remains a lecturer. Over the years their work has diversified into aerospace, industrial and civil engineering, including helicopter blades and aeroplane wings; giant drones; rotary components and Formula 1 pressure vessels; structural reinforcement and seismic strengthening; plus crane and bridge cables, where they have manufactured some of the highest load cables ever made.

The company offers clients complete solutions, from concept, design and engineering, through to manufacturing – they even make all their own manufacturing equipment in-house – and, when required, custom tooling. Dr Winistoerfer passionately states, ‘The Swiss made aspect of Carbo-Link is a vital part of who we are, and our location close to world-leading engineering facilities enables us to thrive on innovation.’ Staff are highly trained and their immaculate facility is Aerospace QA Certified to AS9100D. 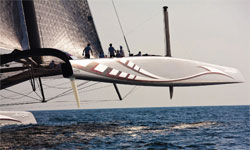 Ngoni (below) and 2010 America’s Cup defender Alinghi 5 (above). The Alinghi cat was one of the most interesting sailing projects among Carbo-Link’s long list of technical feats, the whole cat being held together and kept rigid by a complex arrangement of lightweight tensile and compressive members dominated by the web of solid carbon rods beneath the platform which had to be accurately tensioned to ensure the whole structure remained true under load as well as stiff. With a wing mast like USA-17’s she may well have won the Cup

Their corporate set-up and technology allow any development work across their diverse business to be easily transferred between markets, including sailing. This side of Carbo-Link is run by a dedicated staff, while among their consultants is Kiwi America’s Cup legend Murray Jones, who has been closely associated with the company since their first involvement with Alinghi.

A common criticism of solid rigging is its lack of portability, that it cannot be coiled up and easily sent back to its maker. In fact, in its virgin state Carbo-Link rigging does arrive coiled. It is then cured on site – all part of the package. To do this Carbo-Link use their highly refined process of ‘Ohmic curing’. This makes use of carbon fibre’s high conductivity: a current is passed through the rod’s length causing it to heat up and the pre-impregnated fibres to bond.

And what about returning a damaged cable to the manufacturer? You don’t have to. Firstly, Carbo-Link rigging has no cover to chafe through. A major virtue in being cover-free is that it allows easy visual inspection. From there it can be subject to non-destructive testing, but such is Carbo-Link’s experience from their extensive R&D that in most cases, if any micro-cracking or impact damage are evident on the outside of a cable, they will know the exact extent of the damage through the cable’s full cross-section.

If their rigging does require repair, this is carried out in situ. The damaged area is sanded back, new fibres are laminated in, cured and painted – and all this can be carried out 50m aloft if required – much more like boatbuilding.

For superyachts not having to un-step and then re-step the mast, plus the absence of any shipping to and from the manufacturer, represent significant savings both in time and cost. Further cost savings can be made by amortising the cost of the rigging, thanks to its exceptional lifespan. Carbo-Link rigging’s life expectancy is some 20-25 years – and at no point in this period will it need to be returned to its maker.

It is also less likely to be destroyed in a lightning strike – a very expensive, yet surprisingly common, problem for superyachts. It is not lightning-proof but, thanks to having minimal terminations and no bonded joints, there is no static charge – the rigging is an earthed connection at all times.

So, as never before, modern consolidated rigging should be thought of as being as robust and immovable as a part of the boat.

It is this that causes it to behave more consistently, making it easier to set up a mast straight with more consistent prebend. And it requires no bedding in, or settling in, and won’t creep over time. It is perhaps for all the above reasons that Carbo-Link rigging has been fitted onto so many top yachts, from the America’s Cup to all the new Ultime maxi-trimarans, including François Gabart’s new solo round-the-world record holder Macif, to two of the most significant recent superyachts – Ngoni and Pink Gin.