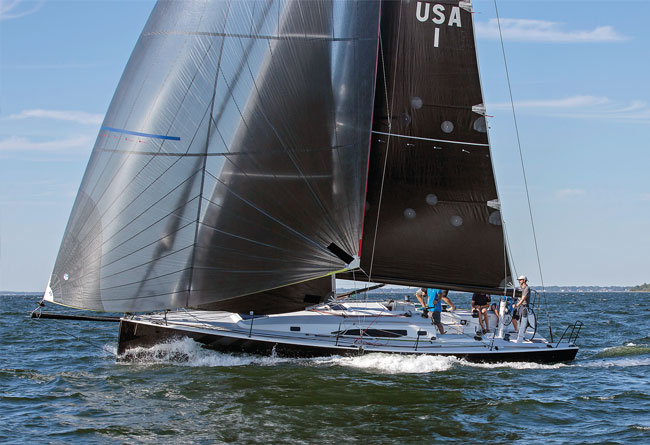 The new J/121 has been created to allow fast, simple sailing for those who want to spend their time tackling classic ocean races (quickly) as well as local beer can races… and not chasing down a large crew

Four decades ago a sleek, flush-deck keel boat appeared in the summer race circuits around New England and turned heads with both its looks and its speed around the racecourses. Fractional-rigged with a large genoa and balanced sailplan, the J/24 was an instant hit; within a few short years fleets were appearing all over the US and elsewhere, with the top names in the sport enhancing the competition among rival sailmakers fighting for their share of a fast-growing new market for sails.

Main picture: A very contemporary sailplan with multiple headsails set on furlers will allow a friends and family crew of mixed ability to extract the most out of a very modern sailboat – whether stress-free fast cruising or tackling the great ocean racing classics under IRC and then filling in the blanks with evening racing! And after not very long there will be one-design class racing as well…

The newest offering from J/Boats, the J/121, is both a logical extension of other performance designs they have built over the years but also a significant departure for the company. The J/120 brought sprit-boat sailing to the 40ft range two decades ago, and more recently the J/122 brought a more modern and IRC-friendly design to the same size range. Both, however, assumed a full crew of 8-10 people would race onboard, with the sailing systems and interior accommodation arranged accordingly.

While many of us remember the J/24 era clearly, and are still struck by how many J/24s are still out there racing, what people may not remember is that designer Rod Johnstone was not just interested in performance when he drew and built his iconic little design, but also had in mind that this was a boat that could help encourage family sailing. Yes, the J/24 was envisioned to get the family out together on the water, even sleep aboard with its modest but liveable accommodation. It was not uncommon in these early days to have crew staying aboard while racing at class regattas…

Times may have changed, but the J/Boats philosophy has not, which is why literally thousands of boats across dozens of different models have been sold under the family brand name – always with one overriding consideration in every design: will this boat be suitable for sailing with family and friends?

‘Whether it’s day sailing, buoy racing, long-distance cruising or offshore racing, the family fun characteristic is very much in the J/Boat DNA,’ said Jeff Johnstone, company president. He should know: Jeff is one of several second generation Johnstones to carry on the family business. Rod’s son Alan has taken on the designing of J/Boats, including the J/121, and Jeff and Alan’s cousin Stuart is active in marketing and also publishes the weekly (sic) J/News.

Like other global brands, J/Boats’ success is founded on staying in close touch with their customers as they move through the sport. The product line has therefore evolved to remain relevant to their large, welldocumented customer base, as well as attracting newcomers with the company’s latest ideas.

Scroll forward to current times, when finding crews this large for local racing is no longer easy, nor inexpensive, and racing preferences are evolving away from the intensity of an hour-long battle around buoys in favour of something a little longer but more leisurely in pace – something less specialised and athletic and more fun for a broader group of sailors.

But those who do want the intensity of buoy racing are also well catered for: small keelboats like the J/70 and J/80 offer an easy package that has struck a chord all around the world. This immense popularity is resonating in the marketplace – within just 18 months of launch, the J/70 joined the J/22, J/24, J/80 and J/111 in receiving international class status from World Sailing.

Now imagine taking that same J/70 crew of four or five and being able to do coastal day races or offshore races in any weather, and be fast, safe and comfortable all at the same time, and without resorting to specialised systems of sail or appendage control. Or loading the boat with 8-10 people for a day race, if desired. This versatility lies behind the J/121.

‘We wanted to reach sailors who might have burnt out on windwardleeward course racing, and who would otherwise be keen on competing in more adventurous, bucket-list offshore races with a group of friends on an easier-tomanage platform,’ said Johnstone.

‘We looked at numerous signature offshore events and their prevailing sailing conditions and designed a boat with those in mind. As a result, the J/121 is a straightline speedster, more optimised for reaching than the J/122, with flatter aft sections to promote planing like the J/111. The beam on deck is carried aft, much like the J/125, but the wetted surface is kept relatively low compared with many other offshore 40-footers.

‘We didn’t want to go extreme like, say, a Class40 and give up height upwind and light-air performance.’

Below: The mid-sized J/Boats have long been a popular choice for shorthanded racing throughout the world, collecting plenty of silverware from 200nm offshore sprints as well as in longer events including the Fastnet and Middle Sea Race – at the same time as racking up the inshore victories. With plenty of stability built in for racing with smaller crews the new J/121 is again ideally positioned to become another weapon of choice for shorthanded teams of all levels of experience competing on every type of racecourse. J/Boats’ long established approach to creating good performing, reliable but not extreme yachts that sail and steer relatively easily will be an added bonus for the purpose – easy on the autopilot wins a lot of races

At 2.36m draft, the cast-iron fin keel with lead bulb on the J/121 is deeper than the J/122, and to replace four or five people on the rail there are two 400-litre water ballast tanks (one per side) positioned at maximum beam. This water ballast assist is a first for J/Boats, and employs a simple system that has been thoroughly tested for efficiency, reliability and ease of use. On a recent trial in 10-12kt of wind we could fill the weather tank in five minutes, transfer water to the leeward side in less than a minute before tacking, and empty the tank completely in about two minutes through the centreline gravity/venturi drain. In these conditions even this modest amount of extra ballast ramps up the speed, especially on a close reach, giving the boat a livelier feel even in flat water. Sail power can be carried further up range, and the addition of a detachable staysail/inner jib on the foredeck helps to further balance the sailplan as you load the yacht up.

Sail-handling systems are set up for ease of handling, using top of the range UBI Maior low-profile ratchet furlers for the headsail and staysail. As with all modern J/Boats, the asymmetric kites fly off a retractable carbon sprit, which in this case is further reinforced with a Dyneema sprit stay for code zero flying. The deck layout is simple and uncluttered with only six winches and clutches to handle all combinations of sheets, halyards and control lines. The carbon mast from Southern Spars is deck-stepped, with the option of a carbon boom.

Tooling for the J/121 was developed at Symmetrix Composite Tooling of Bristol, RI, using their five-axis CNC machining capability for accurate construction of the hull, deck and grid plugs. Hull and deck construction is resin-infused E-glass and vinylester with both Core-cell and end-grain balsa used where appropriate to accommodate slamming loads. The keel grid and bulkheads are fully tabbed and bonded with uni-directional material carefully aligned with the major load paths.

There is a surprisingly short list of optional equipment available on the J/121 and – rather refreshingly – the class rules run to just six pages. This reflects the relative simplicity of the boat as well as its target audience of sailors who are simply interested in fast fun without unnecessary complication.

Already interest in this new design is strong. As of 1 December the order backlog was at 10 months with one boat coming off the line every three weeks. The first owners are spread among six countries, with the US east coast contingent, where initial J/Boat interest is traditionally strong, planning a circuit of coastal and offshore races featuring ‘Open Course’ racing, a format of multi-leg adventure day races J/Boats is developing that rewards navigation, weather routeing and strategy as much as boathandling, tactics and sail trim.

Today’s boatshows are now packed out with acres of highfreeboard designs boasting of onboard amenities… rather than sailing qualities. The J/121 sits quietly alongside the docks in an attractive contrast.

‘The strong emotional response we have had from so many experienced sailors has been especially gratifying,’ said Johnstone. ‘People are ordering J/121s to sail in their dream races. One of our newest clients plans to tune up against sisterships in Newport, RI in 2018, then ship his boat to Malta for the Middle Sea Race and then back to California for the 2019 Transpac. Other owners plan to sail the 2019 Caribbean circuit with the highlight being the RORC Caribbean 600.

‘With the 121 it’s been great to help enable both longtime J/Boat owners and new “family members” to achieve their wider sailing dreams… some for the first time, and others all over again – but maybe now sailing a little faster!’