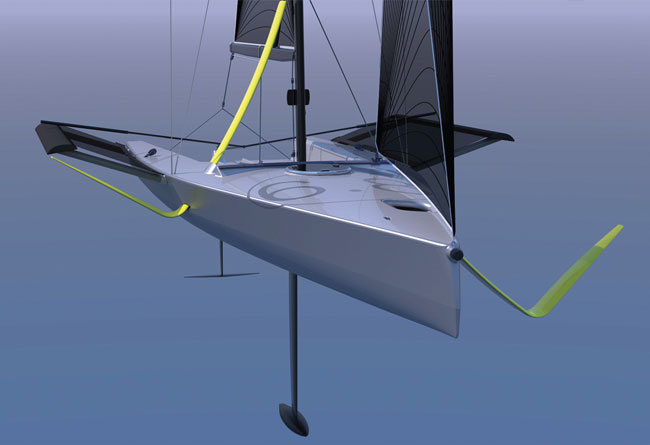 Argentina’s track record for producing some of the world’s foremost (and most disruptive) yacht designers is underscored by the latest offering from the young Wilson Marquinez Design House: the MW680F.

At 6.80m this small, very light yet stable design bridges a gap in high-performance sportboats between the fastest class keelboat and a true foiling sportboat. With a crew of three, the 680F is low freeboard but decked over in the bow to shed water, has racks rather than trapezes for easier manoeuvres, a lifting 1.6m bulb keel, and 40m2 of sail to propel only 300kg in boat weight plus another 250kg in crew.

Getting around in this ‘wet mode’ the boat will be fast, but when fitted with adjustable V-foils it takes off like a rocket with boat speed projected to match wind speed over about 10kt of true wind. The rake of the T-rudder needed for foiling is pre-set for the wind conditions with the main foil being controlled to maintain longitudinal stability over the foiling range. Launched as a one-design, the MW680F features a single jib, one main and one asymmetric spinnaker that is shaped more like a Code 0.

‘We are excited about this boat,’ say designers Nahuel Wilson and Laureano Marquinez. ‘It has modes that make it fast, but also safe; it should interest the keelboat racer wanting to step up towards multihull-level performance but on a more familiar platform.’

When foiling territory is reached, research put into the aero package will make itself felt in terms of improving foiling range and giving the user a reasonable level of comfort in flight. For horsepower the team is now working closely with One Sails, testing different rig options in their virtual tunnel.

The MW680F is aimed at sportboat sailors who want to take a first step into foiling but without the drama of a large foiling cat. Just as the Waszp of Andrew McDougall is proving a huge sales hit among good sailors who want to fly a dinghy but lack the time and the considerable extra cash to make a Moth interesting, so the MW680F could do the same for keelboat sailors looking for something that is more challenging but also still ‘realistic’

Wilson and Marquinez honed their design and engineering skills on a range of diverse projects from chic cruiser-racers to production designs, Volvo 70s and superyachts, as well as working on foiling catamarans in the most recent America’s Cups. After training in naval architecture the pair worked with two other great Argentine designers, Javier Soto Acebal and Juan Kouyoumdjian.

‘We are very fortunate to have so many years of experience in such great design offices,’ says Marquinez. ‘Having the opportunity to be involved in so many different kinds of projects helped give us a clear view of the importance of investigating new design directions, as well as the awareness that simple but properly executed ideas can bring big steps forward, both in grand prix performance and enjoyment of regular day-to-day sailing.

‘It comes naturally to us to search for performance and style in design, which is of great importance to our clients. A boat that is beautiful brings to its owner a strong sense of pride and that means a lot to us too,’ Wilson adds.

‘With our projects we work in small teams, usually starting with the production of rough sail plans, hull shapes and appendages, deck layouts and structural arrangements,’ explains Marquinez. ‘We refine these using CFD tools, and consult professional sailors, sailmakers and rig specialists for more details on sails and spars.’

Marquinez says they learned early how a fully integrated approach to design and project management was key to complex projects like the VO70s (Groupama and Puma), the Wally 130 and Rambler 88 among others.

While Marquinez worked on Rambler, for 2013 Wilson focused on America’s Cup foiling, where the initial designs assumed displacement, not foiling mode, before massive retrofits were needed as the paradigm changed. With Wilson being in San Francisco with Artemis, and Marquinez between the design office in Buenos Aires and Newport, RI, where Rambler was being built, efficient collaboration on tight timelines was essential. ‘There was not much time to retrofit the AC72 for foiling, it was a big challenge! But we learned a lot in that accelerated process,’ says Wilson.

For AC35, Wilson and Marquinez, now on their own, worked for Artemis supplying a variety of design services while also providing drawings that helped the Cup organiser’s (ACRM) own engineers define the structures in the new AC50.

With all this knowledge of cutting edge design, the two have since been approached to develop a wide variety of boat types, from a simple, but fun, local sportboat called the MW21, the fast MW27 cruiser-racer with a lifting keel intended for the shallow waters of Rio de la Plata, the no-compromise MW45 offshore racer (that adopts the latest foil technology), as well other sizes of potential new yachts, to a similar performance-only concept. For the free-thinking performance-driven yachtsman the Wilson Marquinez Vision is already proving attractive.