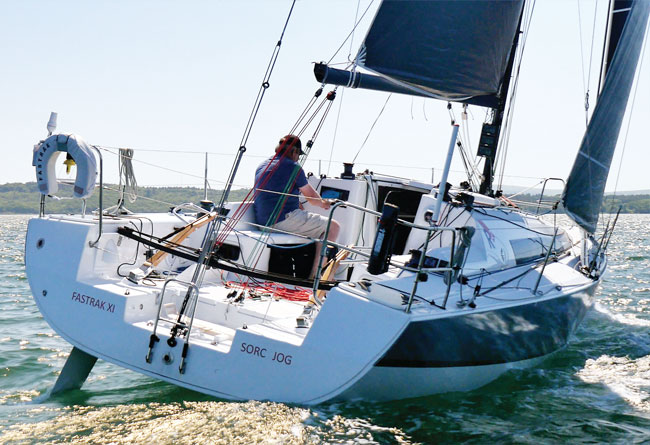 It's not just in the Vendée Globe that today's self-learning autopilots are challenging the helming abilities of the human being on the handlebars...

Aside from being the boss of UK Jeanneau importer Sea Ventures, Nigel Colley is also an active shorthanded racing sailor on his Sun Fast 3200 R2 Fastrak XI and director of racing at the Solo Offshore Racing Club. This growing breed of shorthanded racers are highly reliant on the accuracy of the systems onboard and the ability of those systems to drive the autopilot with maximum efficiency.

Main picture: Colley leaves the helm to the autopilot on his much -travelled Jeanneau 3200 while he accesses his Zeus3 system via the water resistant touchscreen to manage everything from basic navigation to laylines and wind shift trends to monitoring approaching traffic on the integral AIS

Fastrak has twin rudders and a single pilot ram is connected to the rudder link bar along with a rudder reference unit. This is the same set-up that went around the world on several boats (including Hugo Boss) in the recent Vendée Globe, albeit the much more powerful Imoca 60s have an additional ram hooked up as a reserve.

In addition to the displays (more later), Fastrak XI has twin B&G H5000 pilot controllers. These feature smaller monochrome screens and more physical controls, buttons for Standby and Auto, steering left or right in 1° or 10° increments plus Mode and Menu.

The pilot has five modes: Heading (to a compass course), Wind (steering to true or apparent wind), Nodrift (keeps the boat on a fixed bearing, but compensating for drift), Navigation (steering to a waypoint) and Non Follow-Up where the autopilot is simply used for push-button steering.

What is most impressive about the H5000 Pilot is its secondary enhancements such as gust response and heel compensation (courtesy of the motion sensor). So if the boat is sailing downwind and heels, the pilot automatically knows to bear away to keep the boat sailing flat. Likewise, if the pilot senses a wind speed increase.

Nigel Colley is impressed: ‘When I’m racing solo the pilot is helming probably as much as 90 per cent of the time, upwind and downwind, and I’m just trimming the boat, sleeping, cooking and so on. I’ve been amazed a few times when I’ve gone for the helm expecting the worst and actually by the time I get there the pilot’s sorted it all out. With the motion sensor and the true wind speed response detecting when the boat’s hit by a gust, bearing off and then bringing the boat back up after the gust has gone through, it’s scary.’ In fact, this system continues to learn, detecting the rudder response and helm balance.

As with most aspects of H5000, there are default settings, but how the autopilot reacts is highly programmable and is tailored to the quirks of a boat. Fortunately, most processes, as well as calibration at set-up stage, are made easier by being able to carry them out on a laptop, via a webserver page generated directly from the H5000 processor. This is also where more of the H5000’s functionality can be gained, getting displays not only to show a variety of information, but to switch continually between information; or this can be contextual – automatically changing what is displayed depending upon if the boat is heading upwind or downwind or flipping from a countdown timer to compass heading once the gun goes.

Colley continues: ‘I do feel a bit superfluous at times… Usually the pilot can steer better than I can, particularly when I’m tired and can’t concentrate. I will miss shifts in light airs, whereas the pilot just picks them up. Or at night, when you can’t see the telltales very well. I’ve found it awesome downwind when I’m sailing deep angles. I’ve got a symmetric kite on here and the pilot is religiously following the true wind. Talking to people who race fully crewed, some sailors actually think that at times shorthanded sailors enjoy a competitive advantage using these high-tech systems.’

The pilot comes with alarms to wake the skipper in the event of a major change in the wind or an AIS alert. It also has a wireless remote on a lanyard. Colley has found this invaluable for those ‘gust hits while you’re on the foredeck mid-headsail change’ moments.

The performance monitoring system from which the autopilot (or skipper) derives the data is of course the key to the story. On Fastrak XI there is a mix of H5000 5in rectangular graphic displays and equivalents from the Triton² range, in addition to 20/20HV mast displays and there is also B&G’s flagship Zeus3 chartplotter; this features an all-weather touch screen plus physical buttons to use should the touch function be switched off in extreme weather.

Above: the B&G Triton2 and H5000 Pilot Controller installed on the Sunfast 3200 in the article. The Triton2 provides additional data displays such as Wind, Speed, Depth and AIS as well as full control of all the relevant settings. The pilot controller allows the helm to adjust the autopilot remotely in +/-1 or 10° increments, along with changing performance modes to suit conditions at the time.
Below: accessible and neatly packaged… the B&G instruments currently used onboard Fastrak XI – H5000 CPU, clear graphic displays and pilot controller 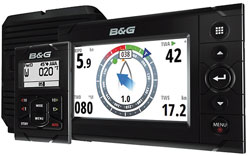 The bigger chart plotter allows other information like GRIB files and tidal vectors to be clearly displayed; there are standard pages across all the displays that can show any information on the H5000 system. These pages are probably as much as the majority of users would ever need: SailSteer, WindPlot (tracking wind trends) and Startline.

As with any data crunching, ‘bullshit in, bullshit out’ is a wise adage. This is particularly true of derived functions, notably true wind speed and direction. Fortunately B&G is for ever improving its sensors. These now include the Precision-9 gyro-stabilised compass that, in addition to having a heading accuracy of better than 2°, also outputs ‘rate of turn’ and heel and trim angle data.

But the real accuracy hike comes from the H5000 Motion Sensor, a 3D accelerometer measuring rate of yaw, pitch and roll along with heel angle and trim angle. When the output from this is applied to the wind information, for example, it reduces inaccuracies in true wind calculations that can profoundly affect autopilot performance.

The Zeus3 plotter is wireless enabled and you can run ‘what if’ scenarios, just as you could in routeing software, with GRIB files also imported. B&G has a tie-up with PredictWind so that a user with a PredictWind account can run a schedule to automatically download GRIBs or carry out routeing using PredictWind’s land-based servers.

Onboard Fastrak, Colley uses Expedition as his routeing software off a Windows 10 tablet PC. This enables him to venture up on deck with the screen alone. Laptop and H5000 can communicate via ethernet cable at the chart table and with the internet through Colley’s cellphone or Iridium satphone. The H5000 is also hooked up to a B&G WIFI-1 for allowing H5000 and Zeus3 data to be shown on any wireless display onboard, such as a smartphone. In practice the phone app is ‘display only’ without control for the chart plotter, while on a tablet there is control functionality but slightly reduced. Phone or tablet can access the H5000 webserver to adjust settings.

Expedition can be used to data log and update Fastrak’s polars, which can then subsequently be re-inputted into the H5000. Similarly, it can be used to create a route for a race, the waypoints for which can also be sucked in.

Onboard Fastrak is a B&G V50 VHF radio, which doubles as a Class B AIS receiver. However, Colley also has a full B&G Class-B AIS so others can see his position. When connected to the H5000 this enables AIS targets to be displayed on the Zeus3. In fact, as yet another indication of the B&G system’s flexibility, the proximity to AIS targets can be shown on the other displays around the boat too.

The radio also comes with a H50, which is effectively a wireless repeater for the V50 rather than an autonomous handheld VHF. This has all the usual VHF controls including a ‘big red button’, which will send a distress message via DSC in an emergency.

B&G gear is also no longer solely the provenance of elite yachtsmen. Now it comes in three ranges, starting with the Triton2, followed by the newest, the H5000, and culminating in the Volvo race grade WTP3. For the vast majority of serious racers the H5000 range will be more than adequate as when launched two years ago it inherited many of WTP’s grand prix features.

Even the H5000 comes with a choice of three CPUs ranging from old friends, the Hydra and Hercules, up to the Performance, although this is less about processor power and more about functionality. Essentially the Hercules provides improved wind information, the ability to set up different polars and 3D wind correction support, while the top-end Performance CPU is for larger yachts with more complex require ments, more sensors and so on. It’s hard to imagine what Major Gatehouse might have made of it all.