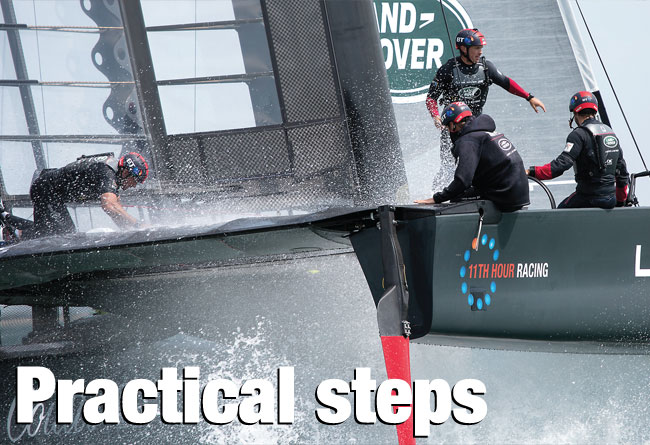 It all started with the ocean, the playing field that inspires every sailor’s dreams, and the vision that sport is a powerful force for positive change. Then a top-notch 2017 America’s Cup team and an organisation devoted to advancing practices that protect and restore the health of the oceans came together – and a partnership was born.

Newport RI-based 11th Hour Racing is the exclusive sustainability partner of the Land Rover BAR America’s Cup challenge, working with Ben Ainslie’s team to meet the ambitious standards they set together at the onset of the co-operation.

As Jeremy Pochman, president of 11th Hour Racing, highlights, ‘We challenge and change practices in technology, procurement, energy production and use, efficiency, economy, community and legacy. We collaborate closely with Land Rover BAR to implement solutions to overcome or mitigate environmental issues, and promote a lasting legacy — and we believe this is happily also fundamental to creating the strongest team possible.

The team’s sustainability strategy is based on three specified targets, driving innovation, promoting smarter futures and generally inspiring excellence, the elements blending together to ensure a lasting legacy both in the UK, where Land Rover BAR are creating an inspirational centre of marine technology, as well as in Bermuda, the team’s temporary home for the 35th America’s Cup. In the UK the team are engaging with their local community through a rich portfolio of activities – from installing solar panels at a local school, to running a sustainability challenge for students at Portsmouth University, through the work of the team’s official charity, the 1851 Trust, to creating the Tech Deck education centre at the team base.

In Bermuda the BAR team have built a base that offers permanent value to the local community while also including sustainable construction features and a lower operational footprint. Moreover, this base will also host a dedicated educational centre open to the public, the 11th Hour Racing Exploration Zone, which features interactive exhibits on ocean health, invasive species, the New Plastics Economy and renewable energy. In collaboration with the leading environmental organisations of Bermuda, the team are also developing a legacy project around the lionfish, an invasive species that is creating havoc in the Atlantic Ocean.

Playing field
For a first-time America's Cup team Land Rover BAR could have focused solely on the path to Bermuda in 2017, but when they first set up the team in 2011 key members were aware they couldn't be a technologically innovative organisation without thinking about the wider impact they would have.

When marketing head Jo Grindley started mapping out the strategy that would secure funding for the team and talks commenced with 11th Hour Racing in their role as first commercial partner of the team, sustainability was identified as a key element of the process.

Without knowing at the time where the 35th America's Cup was going to be held – or its likely format – the group had to rethink the traditional commercial model, defining what they could control without worrying about the event itself. Becoming a sustainable team was a central factor, and 11th Hour Racing realised this created a great opportunity, not just through the powerful voice that an America’s Cup team has as a role model and educator, but also through the future partners that the team would be recruiting.

Meeting Jeremy Pochman and the co-founder of The Schmidt Family Foundation, Wendy Schmidt, in London in December 2013 solidified the team’s commitment towards sustainability, and importantly highlighted to Sir Ben Ainslie that forming a relationship with 11th Hour Racing was not just acknowledging the issues involved, but actively engaging his team from the start.

This was not about the sailing team wearing a certain brand of shoes, it was about the entire team being conscious of everything they did. From what they ate, to how they travelled to work, to how they built the team base, Ainslie himself quickly took onboard that this was not a detracting factor but, on the contrary, that sustainability embedded throughout Land Rover BAR made his team more attractive to other commercial sponsors.

No one in the sport needs reminding about the energy, focus and sheer determination that Ben brings to every project he undertakes. Ainslie admits that he thought he already had a reasonably good understanding of the global issues surrounding climate change, until visits to the Cambridge Institute for Sustainability and the British Antarctic Survey, arranged by 11th Hour Racing for his Cup team and some of their commercial partners. ‘Immediate, frightening and urgent’ are some of the words Ainslie uses to describe his experience there. With that understanding, and as a team leader and now new parent, Ainslie knows that the time is now and that taking action is non-negotiable.

But what did the team at BAR then actually do in practice? The first thing was to get their own house in order: building a 68,000m2 state-of-the-art base in Portsmouth, while minimising operational impact with efficient and innovative lighting, heating and construction methods – and becoming the first professional British sports team to operate under the BREEAM sustainable building initiative, where 100 per cent of electricity is from renewable resources, generating solar power from all available roof space; rainwater is collected in harvesting tanks; landscaping mimics local shingle habitats and promotes biodiversity; protected cages are built to revive Portsmouth’s declining native oyster population.

The team also created the Tech Deck Education Centre – with the aim of engaging 35 per cent of the region’s schools by the end of 2017 working around a rich STEM curriculum.

Then there is personal transport, with Ben’s team wherever possible choosing to walk, cycle, take the ferry, use public transport or car and boat share. When not at work in Bermuda, Ben and his young family now live on the Isle of Wight, so for them a daily commute by boat also makes perfect sense.

One fact that shocked the sailors particularly was to discover that the amount of plastic that enters the world’s oceans each year has now reached no less than eight million tonnes. How could the team make a difference? Saying no to single-use plastics and engaging their fans to raise wider awareness was the natural first step. But the issue of ocean plastic goes far beyond single-use drink bottles, it's also about engaging those involved through their supply chain. From everyday needs related to hydration for the sailors, to catering and team hospitality at events, right through to the construction and production of their chase and multiple raceboats – and investigating end of life boat solutions. 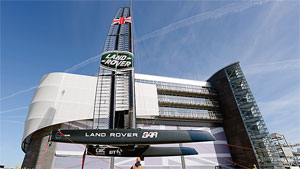 Above: home base for Land Rover BAR in the UK was designed from the start to deliver the smallest possible carbon footprint, both in construction and then during use. Solar roof panels are among many energy-saving and recovery systems that are integral to the contemporary design from locally based HGP Architects. The team’s integration with its local community is still evolving, working with a local technical college to design and build two of these AC50 docking RIBs (below) using recycled materials wherever practical 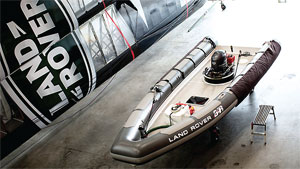 Existing recycling methods used by automotive companies see them burn carbon at such a high temperature that the fibres are compromised, and so can only be reused in non-structural ways. Considering the projected worldwide growth in carbon fibre components over the next decade, there is going to be a major issue with disposal and proper waste management, similar to what we have with plastics and grp. The Land Rover BAR team decided to have a go at tackling this problem, working at solutions to separate the fibres in carbon fibre after use, while retaining their structural integrity. This evolved into setting up a PhD project with South ampton University, which Land Rover are funding but with opportunities for other partners to engage in.

Another example of how BAR are innovating sustainable technology is their successful collaboration with a local apprentice college in the build of two specialised docking RIBs – in the process the team researched the most sustainable materials from which to manufacture the boats, and this led to the initial development of an LCA (life cycle analysis) tool. This process perfectly embodies one of the team’s goals – whatever they do, they want to talk to industry and effect change.

The LCA represents a scoreboard that measures the team’s environmental and financial impact relating to building the race and support boats. In simple terms it can be seen as a launchpad for something much bigger. As Pochman of 11th Hour Racing points out, ‘The goal is to produce a blueprint that other marine companies can use to integrate LCA into their operations, helping make the industry more sustainable and more innovative in environmental considerations.’

The docking RIB project highlighted some interesting points. Many remained frustrated that the RIB project ultimately didn’t use 100 per cent recycled materials – that simply wasn’t possible at the time but progress here is ongoing. It also highlighted that recycled materials are harder to work with, and so these skills need to be addressed in technical colleges, for example. What Land Rover BAR are now aware of is the importance of sharing those learning experiences with other training establishments, and that is done by communication… including articles such as this.

Ainslie’s team also has a food charter, wherever possible sourcing food from within a 25-mile radius of the base. After threetime America’s Cup winner Jono Macbeth attended an 11th Hour Racing screening of the film Racing Extinction, the next day he stood up in front of the whole team and proposed they adopt ‘Meatless Monday’ to reduce CO2 emissions.

One thing Land Rover BAR have discovered, also a key philosophy of 11th Hour Racing, is that problems that initially seem too big usually become manageable when you break them down. 11th Hour Racing organise periodic ‘Raising the BAR’ sessions for the team and their families, with this message very much in mind – that individual actions remain crucial. As Pochman reminds us, 11th Hour Racing’s creed is ‘one degree at a time: too much helm will slow the boat, but small incremental changes will get you there faster’.

As Ben Ainslie himself confirmed, ‘It was Wendy Schmidt who really instilled in me the responsibility and the opportunity that we have to make a difference. At Land Rover BAR we now have a dedicated sustainability team, and with 11th Hour Racing we set ourselves the goal to be the most sustainable sports team in the country.

‘We look forward to sharing our experience for the benefit of the marine industry, and to working with all our partners to set about furthering this agenda within our sport and to the wider world. There is so much more we can and must do – we are just scratching the surface and the lesson I learned in Cambridge is that time is running out: we are at the 11th hour.’
Blue Robinson