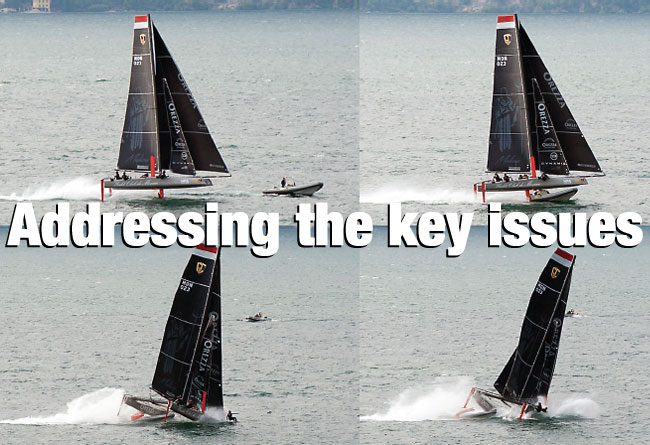 Among topics introduced for the 2016 edition of the Yacht Racing Forum is a new module dedicated to Risk Management & Safety – an issue that is of increasing importance for all yacht clubs and race organisers...

Main picture: (Nearly) as bad as it gets... as the GC32 of Prince Casiraghi of Monaco slices into the Rib of Italian photographer Carlo Borlenghi earlier this year at Malcesine on Lake Garda. The GC32 pitchpoled violently after impact, launching several crew far away from the capsized cat and her exposed foils. This incident highlights the severe lack of forward visibility once such boats are up and foiling – something that is yet to be widely appreciated

Sailing is changing rapidly, with new technologies, faster boats and more and more high speed close contact. You are a club, a race organizer, a sailing team? Very probably you have no real idea of how exposed you are legally with this rapid evolution. We are talking liability, fines, compensation… and in some of the most extreme cases a real risk of prison.

Some recent examples: Phaedo’s miraculous high speed escape from the midst of the ponderous X One Design fleet in Cowes Week, Spindrift’s tragic accident during the Volvo Ocean Race stopover in Lorient and the much-publicised and violent GC32 crash with the powerboat of a famous international photographer in Italy during July. Plus of course, Franck Cammas’s own severe injury suffered when falling from a foiling catamaran… There have been plenty of other near misses as well – as boat speeds increase so inevitably do the inherent dangers.

The Yacht Racing Forum initiated this debate last year in Geneva. One year later and the subject has reached such a level of urgency that a dedicated module is considered both appropriate and necessary for Malta next month. Chaired by outgoing Volvo Ocean race CEO Tom Touber, this conference will explore and assess participants’ and organisers’ awareness of the risks involved, with the aim of identifying more dependable and reliable strategies for the future.

One small example: just 15 years ago relatively few people wore a helmet regularly for skiing. Today, few skiers would venture onto the slopes without adequate head protection. Sailing, on the other hand, still lags behind. For the mainstream market in particular the rules of our sport have yet to adapt to the new reality.

Another comparison: it is only at the highest level of yacht racing, primarily in the America’s Cup, that personal impact protection is seen as essential. Compare this to horseriding where the majority of those taking part now consider body protection to be the obvious choice – especially for the younger rider.

The objective of the Forum’s new Risk Management & Safety conference is to encourage our own sport to pay more attention to the ways in which other sports – some of which are clearly now moving ahead of sailing – address such important central issues.

Fresh perspective
Well known motorsport engineer Paul Gascoyne will share with delegates some of the engineering and management experience that he has acquired over the course of many years in the pitlane.

Having studied fluid dynamics at Cambridge University, Gascoyne’s passion for motorsport first led him into the world of Formula One in 1989 when he joined the McLaren team. He has since also worked with Sauber, Tyrrell, Jordan, Renault, Toyota and Force India.

Less well-known is Gascoyne’s passion for offshore sailing; he has competed in major offshore events including the Transat Jacques Vabre, plus completing a solo transatlantic on his Class40. Gascoyne also worked closely with the Hugo Boss team ahead of the last Vendée Globe in an effort to bring Formula One levels of quality assurance to a sailing programme with a poor history of failures; Hugo Boss skipper Alex Thomson finished that edition of the world’s toughest singlehanded yacht race in an excellent 3rd place overall. Design & Technology First launched in 2008 alongside the Yacht Racing Forum itself, the

Design & Technology Symposium
has proved to be a popular stop for designers, builders, engineers, sailmakers and many others such as materials’ specialists.

Chaired by Seahorse International Sailing Magazine’s US correspondent Dobbs Davis, this year’s symposium will focus on technical developments, with a special emphasis on how the newest technologies will in time benefit a mainstream audience.