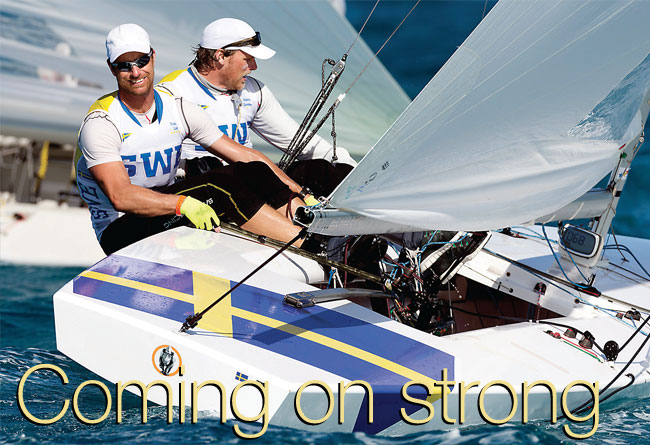 For the past few years the Star Sailors League (SSL) has been attracting some of the biggest names in sailing to compete at some of the fiercest but most friendly grand prix events anywhere. In 2013 Olympic medallists and America’s Cup legends came together to create the League, using a ranking system based on the tennis ATP Tour. The League has already attracted some of the sport’s greatest talents, including Robert Scheidt, Bruno Prada, Jochen Schümann, Paul Cayard, Torben and Lars Grael, Mateusz Kusznierewicz, Mark Reynolds, Diego Negri, Xavier Rohart and George Szabo.

Main picture: London 2012 Star Olympic gold medallist Freddy Lööf and his former world champion crew Anders Ekström enjoying themselves at the 2014 Star Sailors League finals in Nassau. Having for too long been the Olympic Finn ‘nearly man’, Lööf grabbed the Star gold medal in the final race in Weymouth. The fast Swede has now joined forces with his Finn and Star nemesis Iain Percy at Artemis
The climax is the SSL Final which take place in Nassau in the Bahamas at the end of the year. A prize pot of $US200,000 is up for grabs, with $40,000 for the winner.

Just as there are four major Grand Slam events in professional tennis, the long term aim is to bring in four Grand Slams to the SSL. It trialled its first SSL Lake Grand Slam in Switzerland last year, and the first SSL City Grand Slam in Hamburg last May. Each Grand Slam offers a prize pot of $100,000 and a winner’s cheque of $25,000.

The Grand Slam format starts with fleet races, run over two or three days for the right to make it through to the knock-out rounds on the last day. The top team gets a place straight through to the fourboat Final. The second team gets an automatic place in the Semi Final.

Meanwhile, boats from 3rd to 10th go into a Quarter Final where the aim is to make the top five. These five then join the 2nd-place boat in the Semi Final. The top three then meet the top-placed boat from the fleet racing in the Final.

So now we’re into a single-race, winner-takes-all Final between four teams. It’s a tough, tough format that demands a different tactical approach at each stage of the contest.

THE ULTIMATE AIM – FOUR GRAND SLAMS AND THE FINALS
To create a world ranking representative of the skills of each athlete and to balance the odds for each one of them, future Grand Slams will take place at a clutch of carefully contrasted venues:

Currently topping the rankings and the only winner of two events in the brief history of the League is George Szabo of the USA. The 2009 Star World Champion won the SSL Lake Grand Slam in Switzerland last year, followed by victory at the Finals in Nassau. Watching in Nassau was America’s Cup and Star sailing legend Dennis Conner who asked Szabo the secret to this knock-out style. ‘Sail up the middle, Dennis’ was Szabo’s simple reply. ‘Don’t be tempted into the corners...’

Fellow American and double Olympic champion in the Star, Mark Reynolds, clearly enjoys the SSL events. ‘It’s great to be part of such professionally run events,’ he says. ‘It keeps some of the Olympians in the Star, and is a great replacement for the Olympics without the arms race. Currently a lot of teams do bring their equipment but the plan is for the SSL to eventually provide all the boats.’

The SSL has also been attracting some younger world-class talent, such as Croatian Laser Olympian, Tonci Stipanovic, and four-time Finn world champion from Great Britain, Giles Scott. ‘It’s particularly great going up against the Finn sailors,’ says Szabo. ‘They’re so physical and it makes you realise how hard they work their boats downwind.’

The live coverage on the internet has brought big viewing figures, with more than 120,000 individuals tuning into the 2015 Finals for an average 17 minutes’ viewing. The secret, according to Reynolds and Szabo, is the quality of commentary. ‘When people are eliminated, they get invited on to the commentary crew to talk through the next race,’ says Reynolds. ‘Listening to people like Cayard or Schümann predicting what people are going to do, and why – it’s one of the best sailing lessons you could hope for. And now it’s all there on the Internet.’

This year’s SSL Finals take place in Nassau, 28 November to 5 December where the top 15 on the SSL Ranking are joined by five wild card invitees, some of whom will likely be new Rio medallists – once again it will be streamed live online. George Szabo will have to sail out of his skin to retain the crown.