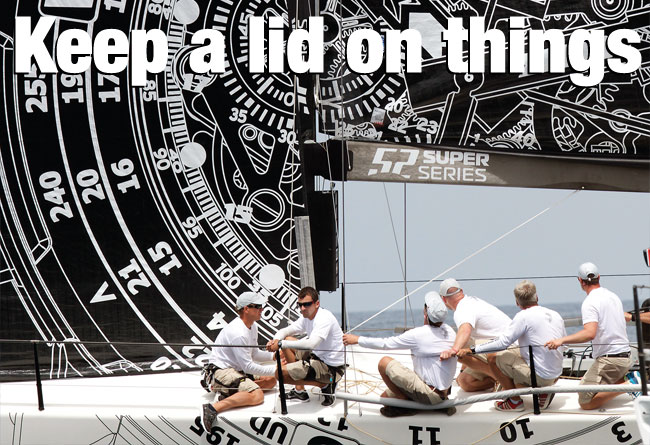 In the heat of the Mediterranean summer the 52 Super Series is now in Puerto Portals where the 10 TP52s stick out like extraterrestrial beings between the hundreds of motoryachts moored in this popular marina.

It is, however, a good place to race from. The boats are close to the sailors’ lounge area, close to their containers and close to the shops, restaurants and bars with tourists parading the promenades. Add a few palm trees, beaches and plenty of accommodation and you get the picture. Never a dull moment, certainly not on the water, where the sea breeze functions like clockwork this year with all of the boats dialled into the conditions with consistently impressive levels of precision.

During the practice race we had our first and hopefully last accident of this year, a collision that took Xio Hurakan out for the duration of the event. Her port side carbon rigging was severed cleanly by a bowsprit wiping over her deck at the shrouds.

Since the changeover to composite rigging we have seen more damage with rigging than we did previously with Nitronic rod. Not surprisingly as rod rigging has gone through decades of evolution whereas composite rigging only recently moved into the smaller sizes of raceboats.

Most of the damage has been operator related. The learning curve is steep but I feel we stepped onto the train at the right moment and for sure we should not get out at the next station but enjoy the benefits of composite rigging and learn to avoid the pitfalls. The accident was resolved onshore in an amicable way and all is now focused on getting Xio Hurakan back in racing mode before the TP52 Worlds in Mahon, Menorca, in September.

Following recent ponderings, on cost and time supposedly being the main causes of the decline in numbers racing in international events, I feel there is easily as much blame that can be laid in the other corner, of too much money creating too high a level of equipment and sailing that in turn equally undermines potential interest.

Especially when racing on corrected time, so not within any class rules, there is not much control of spending. Within a class structure one has a little more grip by setting rules aimed at cutting or containing costs, as well as by creating an event schedule that is friendly in terms of the logistics.

Racing on corrected time, no matter which rating rule, invites non-stop spending on your boat and sails. There is always that next step one can make in optimising crew, boat and sails, especially in the absence of any limit on the number of certificates issued or of any dimensional limits as employed in a box rule.

To take one typical example, it is recognised that adding draft is an area of performance-over-rating gain in IRC. This obviously brings with it expensive and practical consequences – unless IRC soon introduces some limits that are in line with what is currently out there racing today. 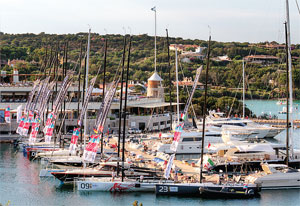 Besides spiralling costs one has to worry about both safety and marina access. Typically in the 52ft size range it pays to go deeper than the 3.5m TP52 class limit if you are focusing on IRC; but only of course if the deeper draft is matched by not just a longer fin but also adjustments in bulb weight, boat weight and, I guess for the very top end, further adjustments aloft in sail shapes and trim.

It is a trend that potentially was always there and in which the TP52 class pointed the way by increasing the class draft limit, reducing the boat weight and increasing sail area.

But if one is not restricted by class rules and event rules, nor by issues of funding, it can be a long and winding road before one realises that optimisation never stops, since part of it is driven by what your competitors do and another part by the rulemakers’ nasty habit of moving the goalposts if they feel that the sailors are getting too close to weaknesses in their handiwork.

If you then also race inshore as well as offshore and realise gains can be made by optimising differently for those formats (and not just in the sail department) then it will be demotivating to see how limitless funding indeed can buy speed and rating advantage.

Also, rating rules do not recognise the importance of holding a lane in traffic, or of fast manoeuvring, and so what on paper seems a fair rating can in practice offer good scope for advantage for those prepared to ‘invest’ more heavily.

With class rules, if you can convince the members, you can to some extent control extreme spending, or at least moderate the pace and point the strategic bow in a more sensible direction with the focus on longterm progress. Easy to set a limit on draft, use of materials, bulb and keel

maximum weight, and so on. However, there comes a moment when one gets too far out of phase with trends and taking advantage of rating imperfections (like on draft) that, with a class like the TP52, where our boats find their principal secondhand market in the corrected time arena, you are more or less forced to streamline things in anticipation of your after-market.

Of course, where this streamlining directs us in undesirable directions we can try to make the rulemakers see the light, but there we are often viewed as the odd uncle with the Ferrari at a party of family members arriving in Mondeos.

The medium-term effect of not catering for the true racers is, however, a continuous flow of money down a drain that creates more frustration than fun. Of course, trying to outspend the competition is at the root of the frustration and a quick look in the mirror is needed here. But I feel the rule administrators can help by setting even some arbitrary limits that for a certain number of years will help to stabilise typeforming and thus spending.

And maybe, as with draft, it also helps us to find a berth at the events that we like to race. Commercial harbours are not really palm tree resorts…

My five cents’ worth.